Things are winding down for Dan Slot as his long and exciting run on Marvel’s Amazing Spider-Man comic book comes to a close. Spoiler alert, Eddie Brock wears the Venom Symbiote again! Today we have a sneak peek for you at the epic #800 issue. Check out all the sweetness below, then head out to your local comic shop and pick up a copy! 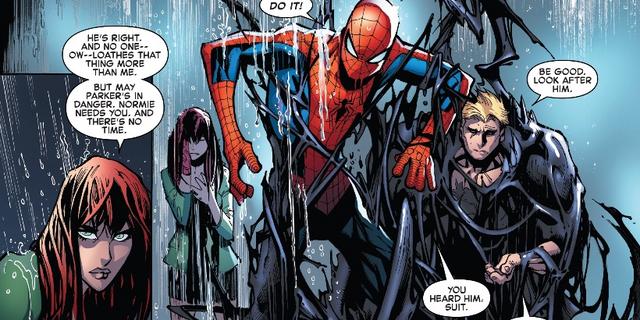 The issue kicks off by dealing with the fallout from Amazing Spider-Man #799 and after Norman once again gains the upper hand during a battle at Stark Tower, Eddie Brock decides that the best possible way to stop him is to let Peter Parker wear the Venom symbiote again. It’s only on loan, though! 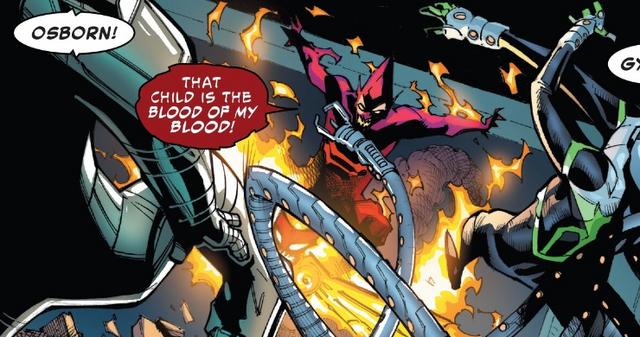 With Normie Osborn also decked out in part of the Carnage symbiote, he goes after Aunt May but she gets some unexpected help in the form of Doctor Octopus and J. Jonah Jameson who, after inadvertently revealing Spider-Man’s identity to Carnage, uses an old Spider-Slayer. Both are defeated by Norman! Surprisingly, this concludes with Peter forgiving Otto and giving him a “clean slate.” 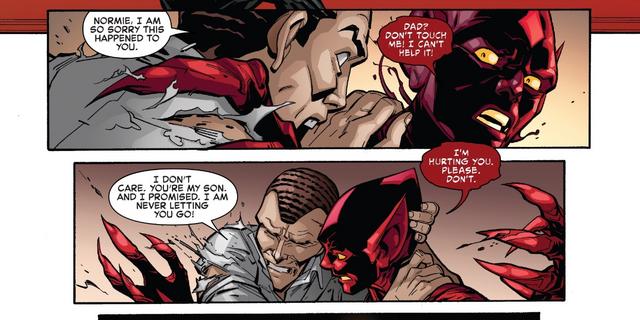 After Carnage throws Liz (Normie’s mother) through a window, the youngster sees Spider-Man save her and instantly turns on his grandfather. Enraged, the villain blames Peter for turning his family against him and a battle ensues. Normie, meanwhile, powers down and quickly reunites with his parents. 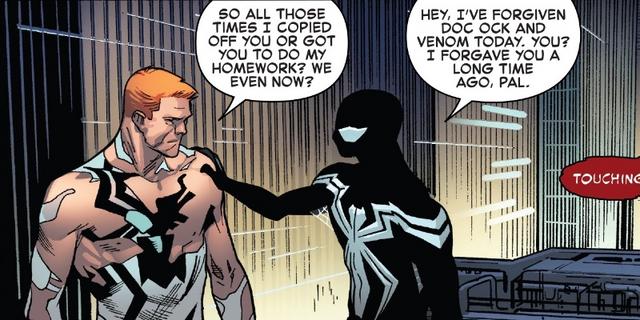 It turns out that there was a very good reason Norman tracked down all of Peter’s friends and family. He infected them with slivers of the symbiote which, at a moment’s notice, he could send to their brain to kill them. However, it turns out that Flash Thompson – Anti-Venom – has figured out Spider-Man’s secret identity too and went to Aunt May and MJ in order to remove those ticking time bombs.

The Death Of Flash Thompson 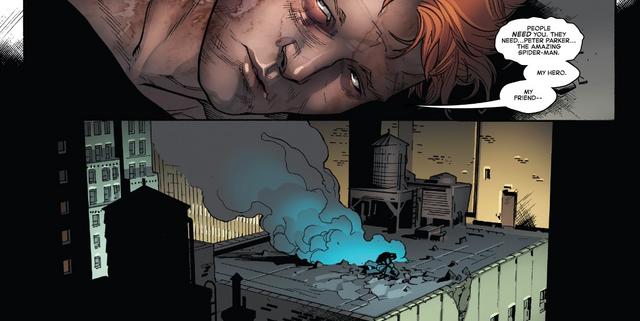 Anti-Venom takes the fight to Carnage and while it appears as if he’s gaining the upper hand, it turns out that Norman still has some Green Goblin tech beneath his symbiote and he uses that to electrocute Flash. Sadly, his injuries prove to be fatal and after a touching goodbye with Spidey, he dies in his arms. This marks a shocking end of the character but his story has been running on fumes.

Enraged by Norman’s attack on Flash, Peter gives in to his violent impulses and lets his rage infect the symbiote. As a result, he transforms into Venom and it’s only his old friend’s last words which help the hero resist those impulses and not be the reason the symbiote returns to its old, villainous ways. 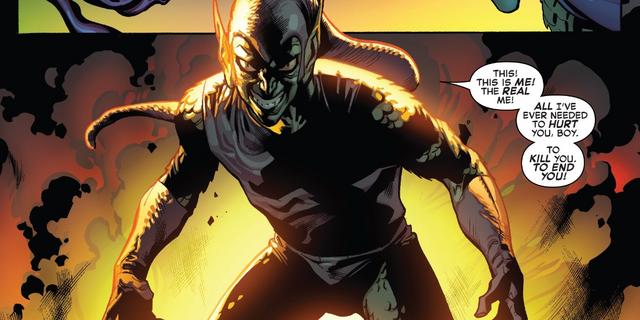 An epic battle between Spider-Man and Carnage kicks off and after Norman gains the upper hand, Peter manages to hold him off by pointing out that it’s not Green Goblin killing the Spider…it’s Carnage and Cletus Kassidy! The villain is enraged by this and when Peter removes Venom and challenges him to fight mano on mano, Norman takes off the symbiote to reveal his old Green Goblin persona. 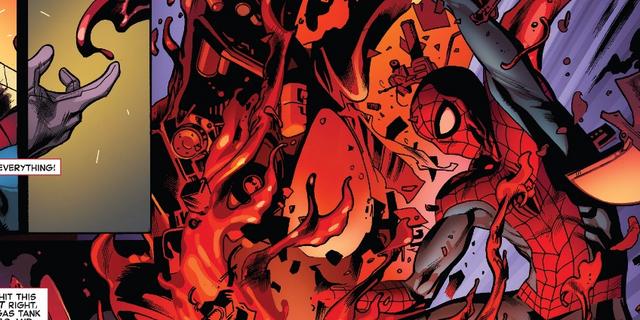 Spidey manages to take his foe down and when the villain begs the Carnage symbiote to help him, the wall-crawler seemingly destroys it by hitting it with an exploding gas tank. However, the symbiote was attached to Norman when Peter destroyed it, and he wonders what sort of effect that might have had on his old foe’s mind. Watching all of this is J. Jonah Jameson and he makes a shock decision.

Deciding that the only way to make things right is to kill Norman Osborn, Jameson points a gun at the defeated villain and pulls the trigger. Shockingly, Spidey takes the bullet for the villain and makes it clear that it’s not the right thing to do. After all, With Great Power Comes Great Responsibility!

Norman is behind bars in Ravencroft and believes that Spider-Man is Norman Osborn and he is Cletus Kassidy. His mind appears to have been completely fried but it’s not clear whether or not he’s faking it or if he’s actually lost his mind. Harry, meanwhile, manages to remove the symbiote from Normie but we then see that not all of it has gone which leaves the door open to Carnage’s return one day.

After some words of wisdom from his Aunt May at Flash’s funeral, Peter decides to forgive Jonah for everything that’s happened and a bond is seemingly formed between the two. However, their touching moment is interrupted by a police siren and the wall-crawler heads off to do what he does best.

In the final couple of pages, we’re introduced to Dr. Elliot Tolliver, a character who has just started working at Horizon Labs. It’s then revealed that this is actually Dr. Otto Octavius, a.k.a. the Superior Spider-Man! Where/when he’ll turn up next remains to be seen but we know Dan Slott loves him.

What do you think about these Amazing Spider-Man #800 spoilers? Do you think Slott did the landmark issue justice? As always, be sure to let us know your thoughts in the comments section.
Tweet