The gang is back but I don’t remember most of them, because other than the ones who have gotten older, the kids are now in their twenties.

Well there are a lot.

Now one thing that is happening a lot, and it is not our fault, is that you are seeing a lot of Chinese influences in modern movies, China, a country which banned US movies for decades, is thirsty for our type of entertainment and they outnumber our box office power by a billion. A Chinese commander and a Chinese pilot as well as the destruction of a Chinese city are incorporated into the film. Gotta hook those Chinese audiences and their Yuan. They never got to see Independence Day so Hollywood takes a proven script, and regurgitates it. It has happened a lot in the past few years.
On to the movie.
A distress call is sent into space in the last film and it reaches a ship, a very large, ridiculously large, ship. This ship that attaches to the Earth like a giant tick sucking blood would cause huge problems. Most assuredly it would create orbital havoc in our galaxy as it threw the Earth off its axis and changed our center of gravity. Yup it is THAT big. 3000 miles.

This is essentially the same movie with a few parts tweaked for the sake of change. Earth attacked, Earth’s defenses now enhanced a bit still cannot repel the attack, old tech is used against the ship to win. Morse in the first, RADAR in this one. The heroes sacrifice, characters die, aliens choke Earthlings to talk, A small group of fighters are sent inside the big ship.

I mean there are some minor changes but a lot of things don’t make a lot of sense either.
We have visions by those touched by the aliens of a round sphere with a line. It turns out this round sphere, who we shoot and ask questions about later, is a different ALF.
We have a new character that is an African Warlord, now there is something for kids to look up to. He says the best way to kill an alien is by stabbing it in the back…hmm honorable.

We get not one but at least two monologue speeches. Including the one from the first movie.
Our new President is killed and so the commander in Area 51 General Adams is sworn in.
I still am not sure why we even care about the vessel that is monitoring the drill. They sure did not earn their millions if you ask me.
Why does the mama alien go after a school bus full of kids? She sure is a spiteful woman, gets shot by a pilot and she goes after her, goes after the spherical alien which is not really a threat but could be useful I guess. It would have been funny for mama alien to toss it like a cricket ball. A cricket ball who reminds me of Marvin from Hitchhiker’s Guide to the Galaxy

In the end the Earth is trashed again just not as bad, We have new heroes, and now we are going to go out into space and do a pre-emptive strike, since we are so badass now. Even though twenty minutes earlier our planet was almost a dried up prune sucked dry.

The CGI is fine, the story is fine, the problem is we have seen it all before. They really squandered an opportunity to do something completely new and instead spit out almost exactly the same story.

Did you enjoy Independence Day Resurgence? Make the JUMP to the forum and let us know. 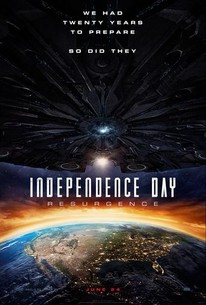