Dr. Adele Burkhart is a renowned scientist travelling by train to blow the whistle on government agencies who are using her research for a “Doomsday Device.” How a scientist could work on a project and not understand how the research could be used in a military application is something we will set aside for the time being. Other interesting things in this issue include how a train ride would be a venue for a press conference about secret defense contractor applications is very imaginative!
Alas, the train is attacked by masked, blue clad terrorists who kidnap Dr. Burkhart and either plan a ransom or plan to extract her research for their own nefarious purposes, or both.

This is the first appearance for all the Joes and the introduction to Cobra, “the ruthless terrorist organization determined to rule the world!!” Legendary author Larry Hama begins to spin a tale that will end up running for a long, long time. 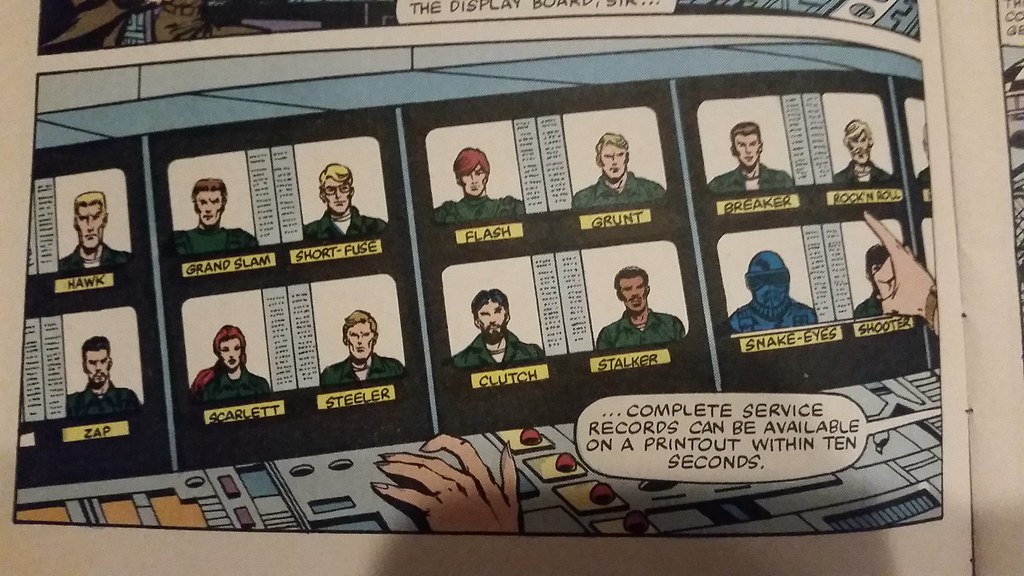 Notable enemies include the Baroness, a bespectacled beauty of European descent. Also introduced is the mysterious Cobra Commander, who alternates between blue hoods and shiny battle helmets. 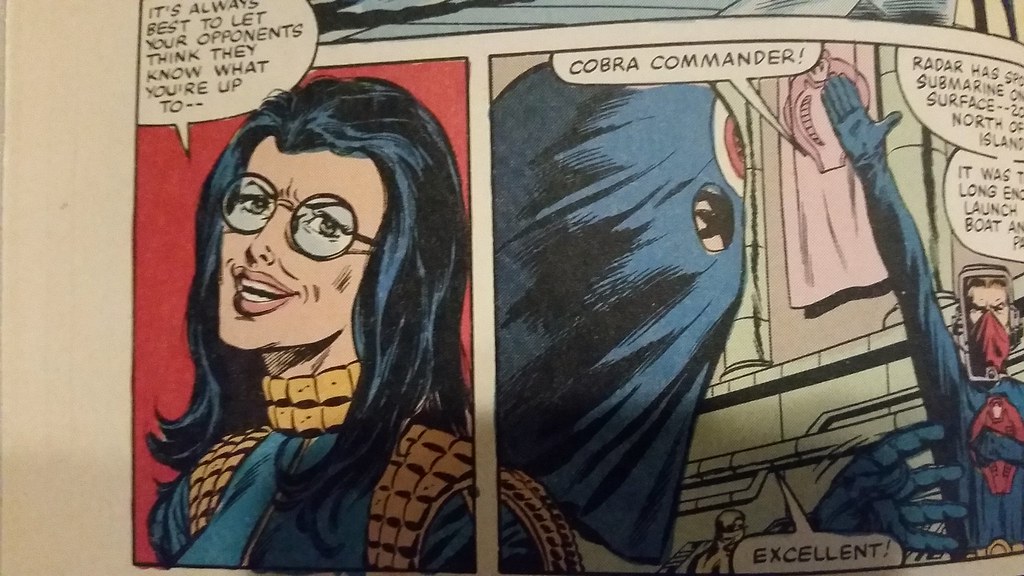 Baroness and the Commander by yorktownjoe

The Joe team is called on to rescue Dr. Burkhart.

Fun Fact: Though she never got a toy, Dr. Adele Burkhart appeared in several more comics including storylines in issues #39-40 as well as issue #78. Since issue #1 was published originally in 1982, and the singer Adele was not born until 1988, were her parents G.I. Joe comic readers? Maybe or maybe not. But unsubstantiated speculation is the fuel of unfounded internet rumors, so there you go. 😉

Other interesting/disturbing images and implications include a village massacred by Cobras, and a self-destruct explosive sequence Cobra has built in to blow up the island. One of the most under-rated Joes: Rafael Melendez, Code-Name: Zap is introduced and actually does something heroic, although completely outside of his file-card military specialties.

To find out how the issue resolves, feel free to acquire, borrow, or research G.I. Joe #1 from Marvel comics, circa 1982.

Okay, that was a bit mean. 😉 Of course, the Joes rescue Dr. Burkhart, although she is wounded trying to prevent Cobra Commander from harming the Joes. Scarlett uses a shuriken/throwing star to disarm him, and he slinks away wounded in the wrist with the Baroness in a jet. The Joes evacuate via helicopter just before the island erupts in a terrible explosion. 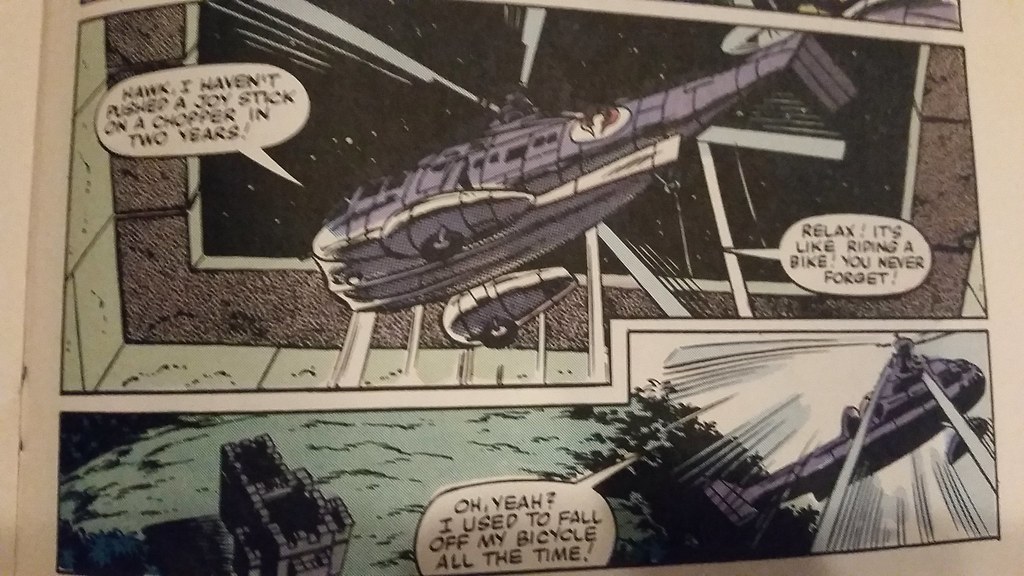 Many years later, the story is amended and Sgt. Jodie Craig, Code-Name: Shooter is revealed to have had a part in this mission by giving her life while providing sniper cover fire while the rest of the Joes escaped. Not sure how this wouldn’t have come up at the moment, but evidently the first General Flagg and his technical aide-de-camp “Sparks” kept their back-up operation as a secret, even from Hawk. (That is a review for another day, though…)

G.I. Joe issue 1 was an oversized double issue with a cover price of a whopping $1.50 US. I believe standard comics were selling for 60 cents around that time. For your extra nickels, you got a bonus story. Or I would refer to it as a “half story with an implied beginning.”

Snake-Eyes, Rock ‘N Roll, and Scarlett are in a shoot-out in a desert in the Middle East. A dictator named Colonel Sharif has his forces moving smartly to over-run them. (The implied beginning is how they acquired the tape and got into a shoot-out instead of sneaking away quietly and successfully. This beginning part could be written in a few pages, but it is implied, which is almost as good.)

The Joes have possession of a secret tape that they need to get out of the region. (A tape is something that was used for recording people’s conversations, as well as making poor quality recordings of your favorite songs from the radio back in the day.) Although they are all sergeants, Scarlett seems to be in charge and orders the boys to leave her since she is wounded. The mission comes first!! Rock ‘N Roll is given the tape, so now he has the “Hot Potato.”

Rock ‘N Roll is ahead of Snake-Eyes and telling him they need to go back for her. When he spins around to try to sucker punch Snake-Eyes so he can head back, he swings at air. Snake-Eyes is already gone, so it turns out he has been mumbling to himself for several frames!

Embarrassed, he double-times it to “town” and throws the tape tied to a rock through a window where other Joes are waiting. Although they initially believe they are being “fragged” by a grenade, they quickly realize it is the tape. Now they have the “Hot Potato.”

Rock ‘N Roll grabs the RAM motorcycle and drives like a maniac back to where Snake-Eyes and Scarlett are about out of ammunition. Scarlett makes a veiled comment that she may consider her last bullet for herself (Pretty dark for a kid’s comic). But as Sharif’s men make a frontal assault, they are strafed to oblivion by the RAM’s side-car mounted Gatling gun. The VAMP makes an appearance to shoot down Sharif’s only air support. Scarlett and Rock ‘N Roll are worried about what happened to the tape. But as the Joes extract, we find that Stalker has already left with the tape in a briefcase, dressed in civilian clothes. He orders food on the flight home. Little pretzels? No. An actual Hot Potato, of course…

So Now You Know! That was Marvel Issue 1, the comic that started many of us down the path as Joe fans. Tell us what you think of the issue by replying below. Thanks for reading! And remember to MAKE THE JUMP TO THE FORUM to check and see when the video review is up and to join in the Discussion.