Background
This issue is a direct echo of the Cold War 1980’s. It surrounds a mission to recover a downed experimental Russian flying vehicle in the Hindu Kush Mountains in Afghanistan. For those a bit fuzzy on their 1980’s history, Russia and other communist countries were conglomerated together as part of something called the “Soviet Union.” Afghanistan is one of the “Stan’s” that was not part of this union. Afghanistan bordered Russia. Border and other disputes resulted in Russian entanglements in Afghanistan. Normally, a world super-power like Russia would trample down camel riding Afghans (the local people, not the blankets). But during that time, U.S. “Advisers” (actual CIA agents) provided “Technical and logistical support” (Stinger anti-aircraft missiles and training). Russian helicopter pilots were not concerned with Afghan WWI-era Enfield rifles. But many of them met their demise when state-of-the-art shoulder mounted missiles blew up their aircraft. Eventually, the Russian forces limped out of Afghanistan, and the locals resumed their dwellings in mountains, plains, caves, and continued to prosper from poppy-related sales. Now the roles are reversed, and the U.S. forces continue to operate in Afghanistan. Mullahs and drug lords (and also Mullahs who are drug lords) are biding their time, trying to wait out American interference in their “way of life.” They take the multi-generational long view. And they are counting on U.S. patience running out, as Russian patience did back in the 80’s. Whether or not Russians are interfering with U.S. operations in Afghanistan today is unknown.

Whoah! Congratulations if you read all that background section! 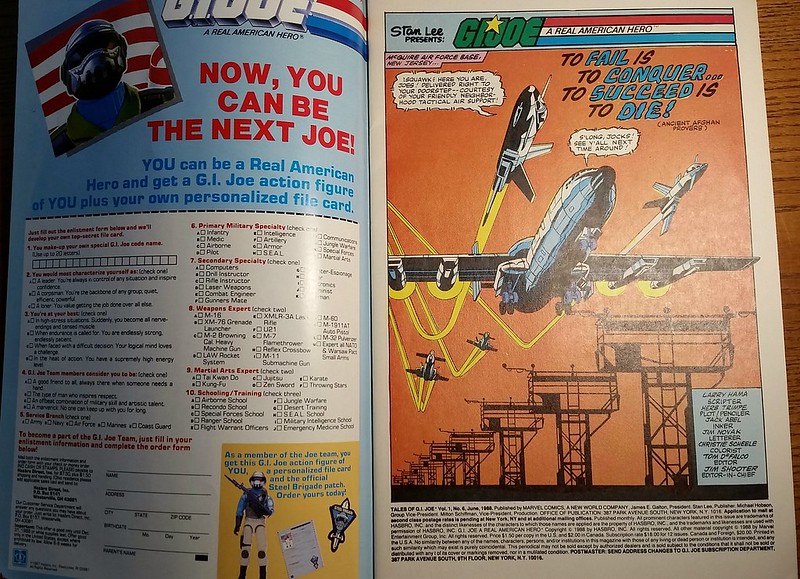 On to the issue. As teased above, an experimental Russian aircraft has gone down in Afghanistan. The Joes are supposed to negotiate with the tribesmen who have located the crash site. The mission is laid out to recover parts of the aircraft for research purposes. 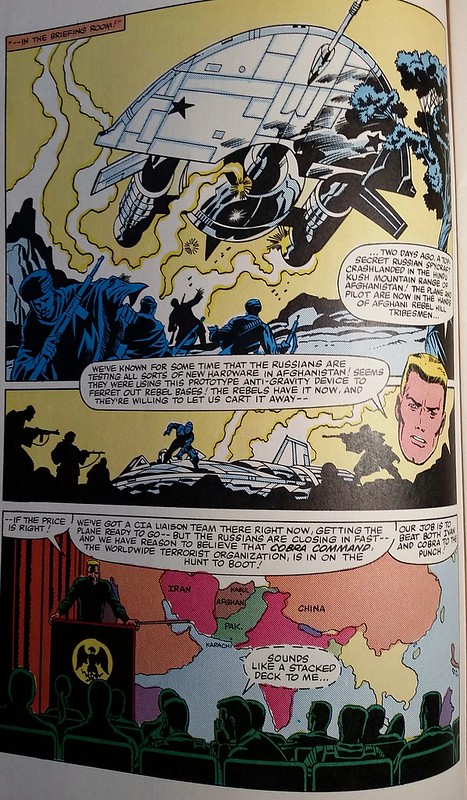 A team of Joes is selected from the 100% of them who volunteered for this mission. Clutch is providing fast support in the V.A.M.P. (Vehicle: Assault, Multi-Purpose.) They are going to use a gigantic vehicle known as the RTV (Ar-Tee-Vee). It has giant over-sized tires, independent suspension, and is supposedly a good vehicle for traversing the dangerous Afghan terrain (mountains, valleys, ravines, etc.). 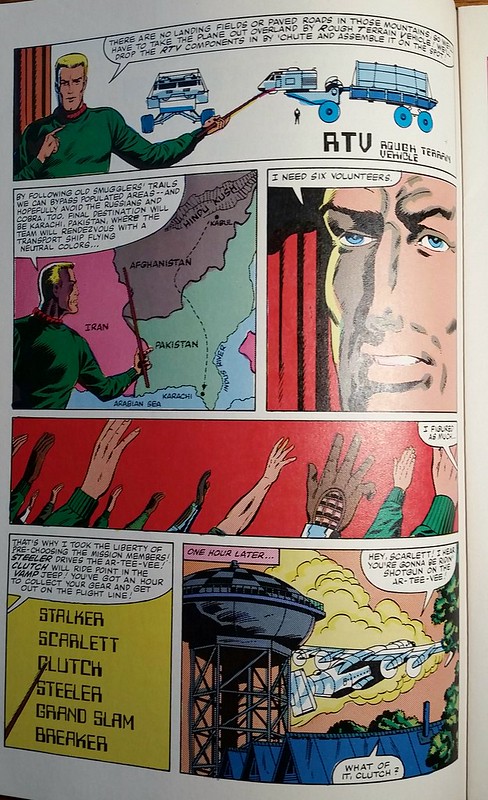 After the Joes fly out, we see someone who looks like Hawk sending a message to Cobra. He codes in as “Songbird” and gives a passcode. Is Hawk really a double agent?! Oh, snap. That is bad. REALLY BAD. 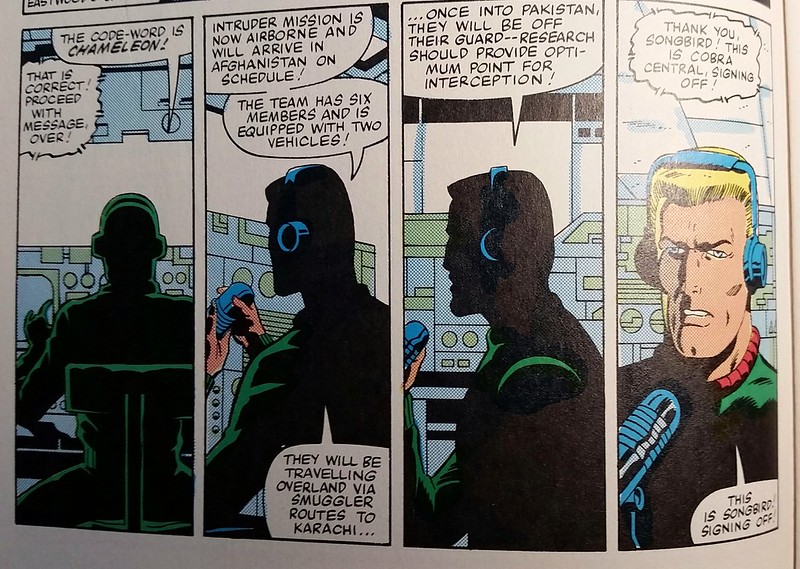 After assembling the RTV (I wonder if that was planned to be a vehicle sold by Hasbro), the Joes encounter trouble with the terrain. 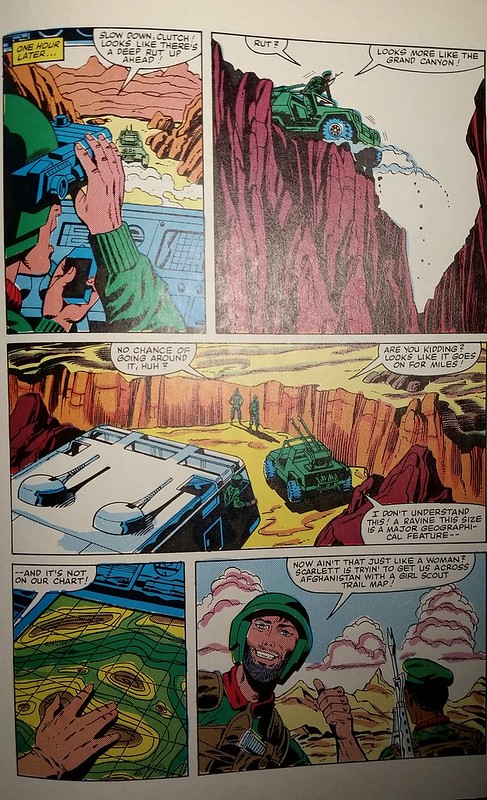 Then they make the acquaintance of the Soviet version of their team: the Oktober Guard. This is the first introduction to their team. Their team leader is Colonel Brekhov. Other members are an over-sized mustached giant of a man named Horror-Show. Stormavik was their naval Special Forces guy. Schrage was a chain-smoking East German machine gunner. Daina was their only female member, and team sniper. 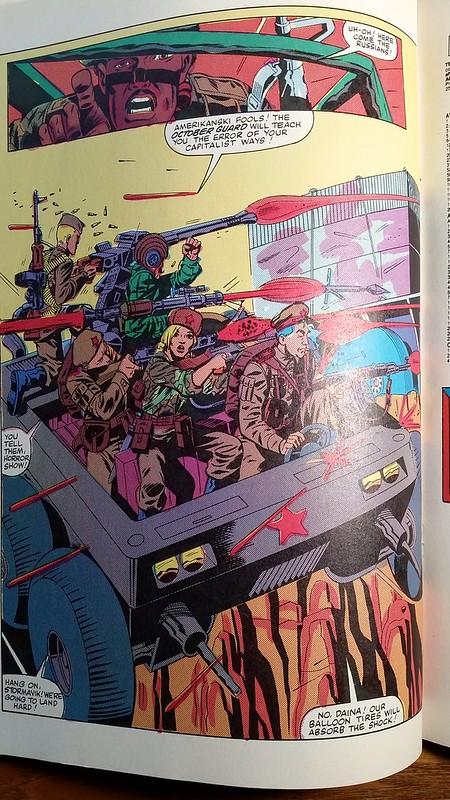 As the Oktober Guard and the Joes engage in a heated battle, they don’t realize they have been played by Cobra. The issue ends with Cobra forces emerging to capture the aircraft remains and stealing the RTV.

Is this the end of the Joes and the Oktober Guard?? 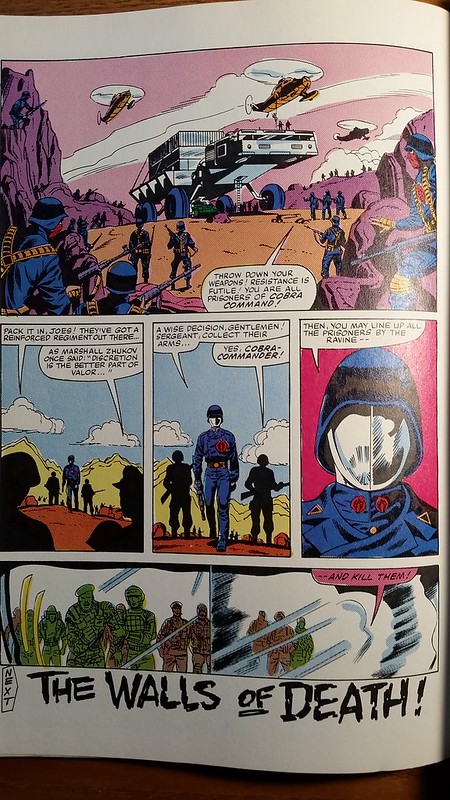 Aargh!! The “Always-Leave-Them-Wanting-More” technique is deployed to perfection by author Larry Hama, and we are left hanging with “To Be Continued.”

I liked this issue, as it introduced us to the Oktober Guard, and it showed Cobra as surprisingly well-connected, with Hawk selling out the team. Political intrigue, geography, Russians and a Cobra ambush. Again, heavy and deep topics for a comic book. Clearly targeting teen and young adult readers, not little kids.

Now You Know…a little more about “To Fail is to Conquer…To Succeed is to Die.” Next week will be Part 2, which is Issue 7, The Walls of Death. Just be glad you only have to wait a week. Hama and Marvel made us wait with a whole month between. Feel free to leave a comment if you have thoughts to add AFTER THE JUMP!
-YorktownJoe