This issue marked an introduction to a new wave of Joe’s, Cobras and vehicles for both. The story stands by itself for the most part, but it foreshadows some intrigue for future stories. And it introduces us to characters and vehicles that Hasbro was getting ready to sell us as toys. The original 3.75” rendition of G.I. Joe arrived in 1982. The first wave is commonly referred to as the originals, or the straight-arms. In early 1983, Hasbro released the same figures with “Swivel-arm battle grip.” This innovation of the swivel at the elbow was a quantum leap forward along the articulation time/space continuum. It made the 5 POA Star Wars figures drool with envy. That wave is commonly referred to as Wave 1.5, since they were essentially improved versions of the same characters.

Issue 11 brought us the introduction to Wave 2, with figures arriving later in 1983. We first see Doc, Snow Job, Wild Bill, Airborne, and Gung Ho in this issue for the Joe’s. We briefly are introduced to Viper Glider Pilots, and have some glimpses of shadowy, unnamed Cobra specialist who will serve as Cobra Commander’s field operations leader. I don’t think I’m giving it away, but he won’t be officially introduced until issue 14. Let’s just say his name rhymes with Pestro. 😉 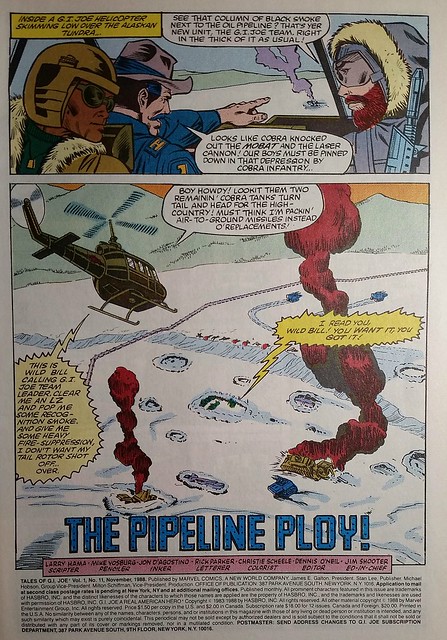 Wild Bill is flying a transport helicopter into a battle zone with “replacement Joe team members.” I’m not sure if the original intent was to archive figures by writing them out of the plot-line as soon as Hasbro rolled out new toys. But in this issue, fresh troops are arriving to help the wounded original members. Larry Hama did not kill off the original Joes, but instead wove new characters in without too much affront to existing characters. Obviously, not all of them could be the main focus point, and it made sense to introduce the Joe team medic Carl Greer, code-name: Doc to the mix. 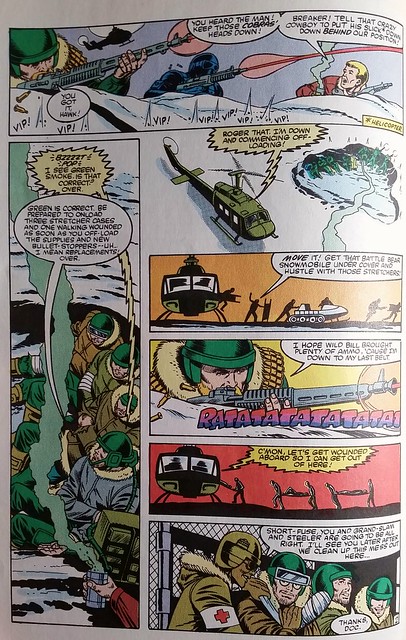 Since the issue was taking place in Alaska, along the pipeline, it also made sense to introduce the Joes arctic trooper/snow specialist/con man code name: Snow Job. He did an amazing job driving the Joes new snowmobile, code name: Polar Battle Bear. 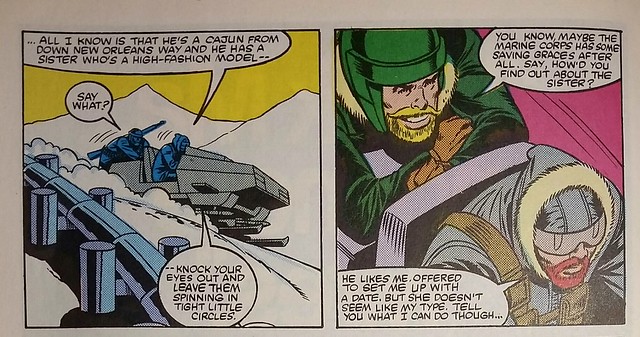 On the Cobra side, the beloved Commander is telling the Baroness about a new subtle battlefield tactician. It seems like he keeps newcomers in the garage, as he is opening the door with his remote control clicker.

We are introduced to shadows of this new character, but he won’t be fully revealed until Issue 14. We are given hints that the Baroness has met him before. 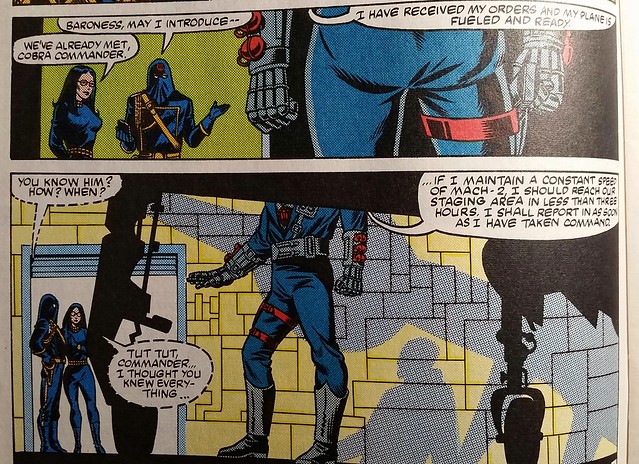 We also had some aerial excitement with Franklin Talltree, code name Airborne arriving with a glider. Hasbro actually released the glider with a tan version of Grunt. But having an actual airborne troop flying this made a lot of sense. As mentioned, Wild Bill arrives flying in the air cavalry. This would not be the last team up of Wild Bill and Airborne, the Joes original Cowboy and Indian (errr, Native American). Sorry about that, Airborne.

Seemingly somewhat out of place in this mission is a Marine, code name Gung Ho. He is wearing an open vest with a giant Marine Corps logo tattoo on his chest. It specifically looks like something even the most near-sighted Cobra could zero in on with a Dragunov sniper rifle. Rock ‘N Roll is critical of him showing off, and Larry Hama inserts some gentle Army/Marine jibes back and forth during the battle. it’s all in good fun.

Basically, Hawk and some of the original Joe team members ambushed Cobra forces near the Pipeline and knocked out several of Cobra’s equipment and men before Cobra took out the MOBAT and other heavy weapons. Some Joes are wounded, and in need of med-evac. There is some confusion on the part of Cobra, as they think the Joe’s air support is a helicopter gunship, but it is merely a troop transport. When Hasbro released the first helicopter, the Dragonfly with Wild Bill, he received the gunship that might have made very short work of the Cobra forces in this issue.

Cobra is doing something along the pipeline, but the Joes are still trying to discover what is going on with the pumping station. 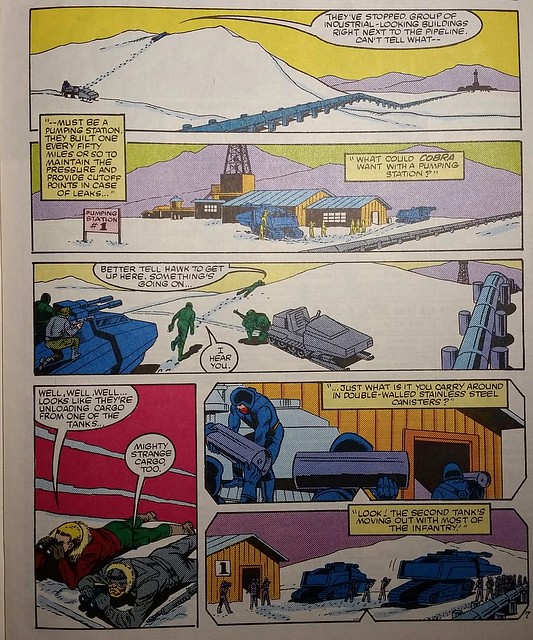 Further along the Pipeline, the new Cobra specialist reveals that Cobra has developed Skype or FaceTime. And they developed this significantly ahead of the internet!! 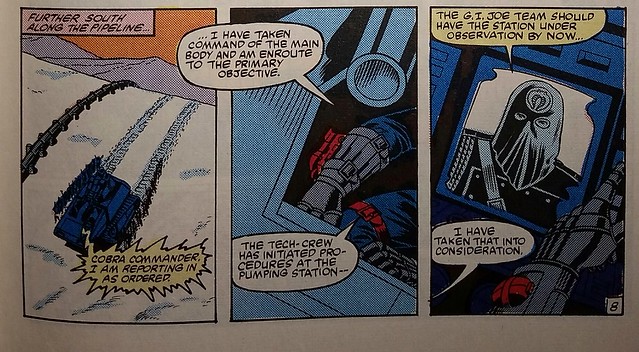 Because nothing inspires trust in your new battlefield tactical genius than micro-managing him via video-conference. Just saying.

The Joes discover Cobra’s plan. Cobra releases a plague toxin into the oil pipeline at a pumping station. They want to contaminate the oil supply, because they are against Big Oil, and they are taking a stand against THE MAN. It is part of their “Eco-Friendly” branding effort. (No wait, that’s not it at all.) With the pipeline contaminated, procedures are put in place to stop the flow at the next pumping station to prevent the spread. 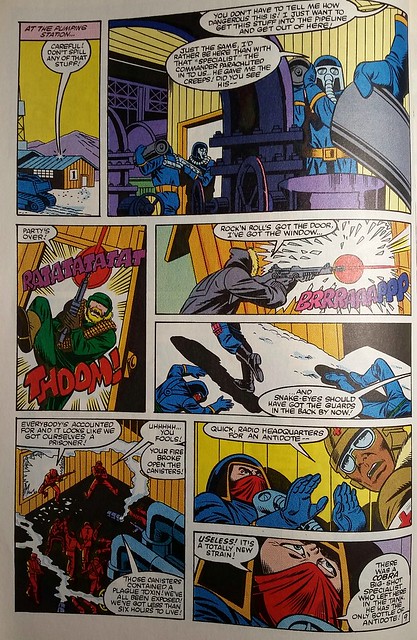 The Joe’s continue to chase Cobra along, and they find tracks leading to a nuclear power plant. I don’t think there are nuclear power plants in Alaska, but there might be a small reactor in Fort Greely. There was a proposal for a Galena location, but it was put on hold. At any rate, there would have to be a reactor there in order for a plot point to be viable. Feel free to investigate if you are curious. Shortly thereafter they find Cobra swiped some plutonium.

There seems to be an opportunity to have gliders flying around sniping at the Joe’s to cover the group’s other activities. What is amazing is that characters can carry on conversation while flying gliders and shooting!! 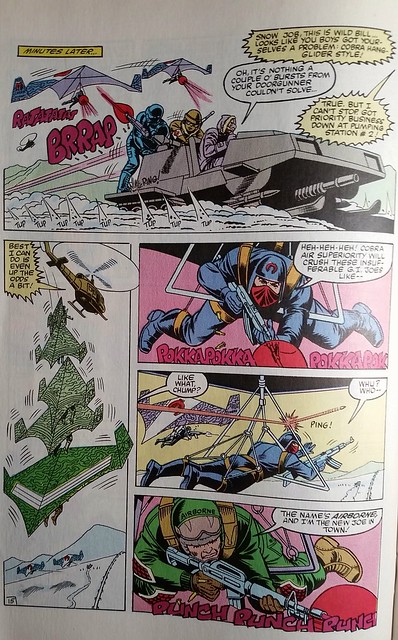 Although Hasbro released Grunt in a tan uniform with the Joe glider as a toy, Hama made the more sensical approach by having Airborne fly it in this issue. There were two Cobra gliders and Airborne tried to help the Joe’s on the ground to get them lined up. Another Joe on the ground provides the least necessary bit of dialogue in a very long time:

Snake-Eyes is a professional. Please. 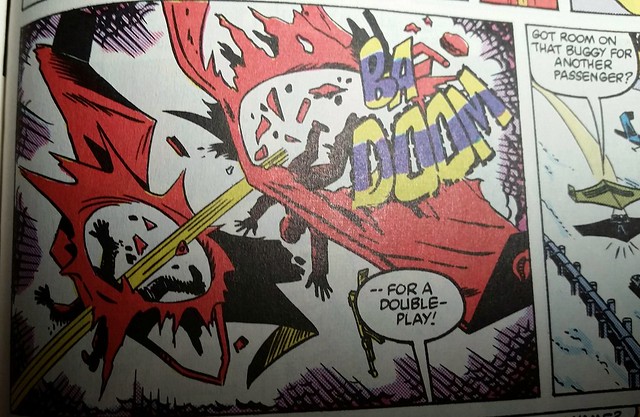 And we discover the real reason Cobra Viper Glider figures are in short supply. Snake-Eyes takes them out two at a time!! Baseball announcers use the term double-play and twin killing interchangeably. But in this case double-play sounds far more palatable. Let’s just say they were blown up and there were no visible chutes.

Another Cobra rocket team is trying to take out Wild Bill in the helicopter. Gung Ho rushes them and takes care of business while trying to make jokes. 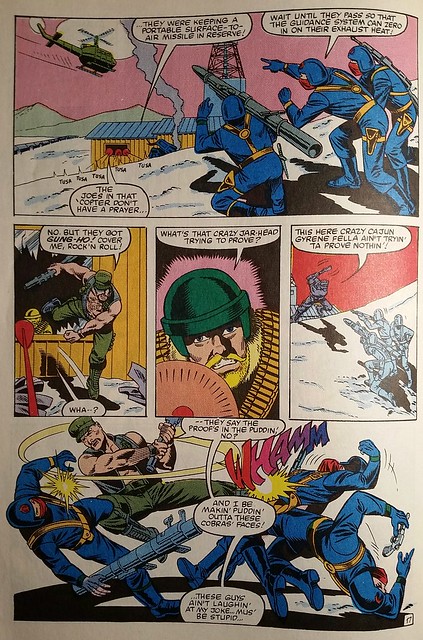 Cobra forces are rounded up, but more things are going on inside at a location not far away: 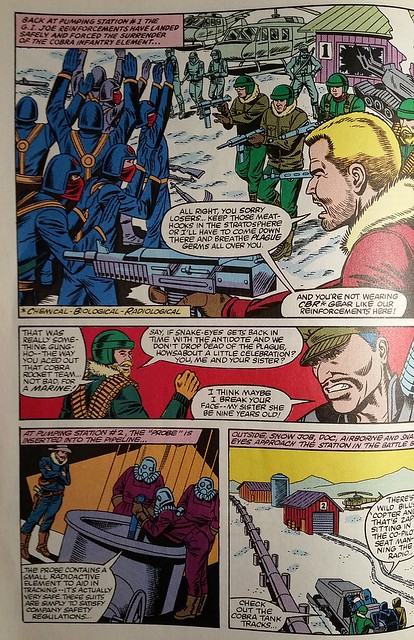 At the other location Doc decides to bring a snowball to a gunfight. This is a terrible idea, but he is incredibly brave in tackling the Cobra before anyone gets injured. He is willing to risk his life to save others, as if it is no big deal. 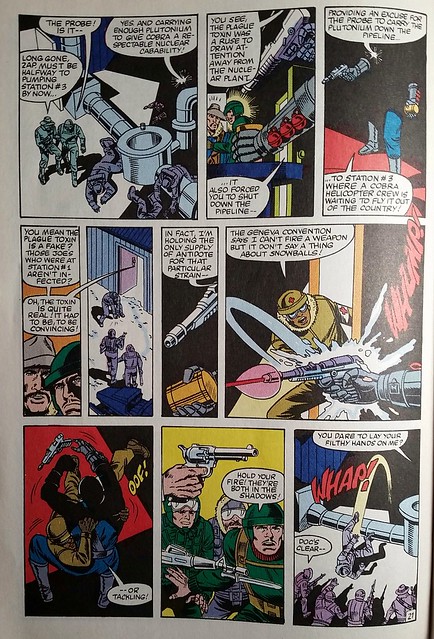 The Cobra waxes on about how the plague toxin was a ruse to get them to redirect the oil flow, send in a sensor, allowing them to get away with the plutonium to increase Cobra’s nuclear arsenal. He basically spills all the details of the plan instead of just shooting the Joes. Which allowed Doc to move in with the aforementioned snowball and tackle him.

On top of saving the day from immediate death from gunfire, Doc snagged the plague toxin antidote away from mystery Cobra. This would enable infected people from the team to survive this issue. That’s pretty big.
Then he negotiated with Cobras telling them they were all infected and offering them the antidote in exchange for the plutonium they swiped from the nuclear power plant. They leave the plutonium, take the antidote and fly away. It doesn’t really answer the question as to why they didn’t shoot Doc in the head, take the antidote AND the plutonium, and fly away. Maybe they weren’t the sharpest Cobras in the group.

As Doc gives the REAL antidote to the Joes, he explains the Cobras were never infected and he substituted tetanus booster shots for the antidote. So Doc is a little sneaky. 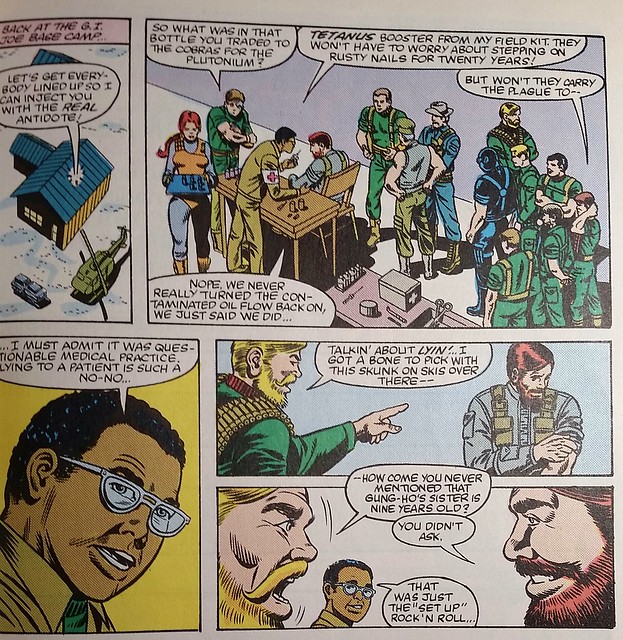 And speaking of sneaky, Snow Job is called out for deceiving Rock ‘N Roll about taking Gung Ho’s sister out on a date. But this isn’t sinister, it is just Snow Job being Snow Job. 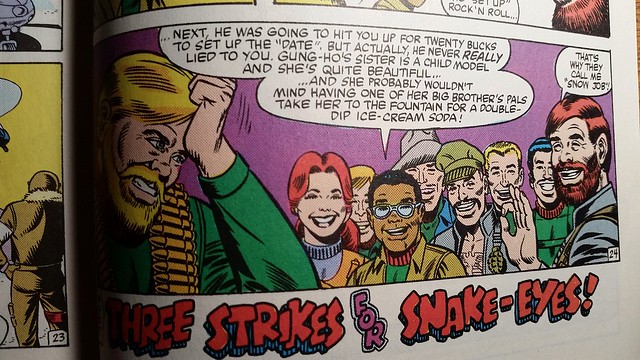 As mentioned last week, Dr. Venom will be bringing us more mayhem in the coming weeks. He undoubtedly created the Plague Toxin used in this issue. And he has more weaponized communicable diseases up his proverbial lab coat sleeve.

Now You Know – a little more about “The Pipeline Ploy.” Next week will be Issue 12, “Three Strikes for Snake-Eyes.” Feel free to leave a comment or give your thoughts AFTER THE JUMP.
-YorktownJoe