It is ironic, that such an iconic character was named after a losing roll of the dice. (When you shake two dice and both are 1’s, it is referred to as “snake-eyes.” Evidently low number loses, and it can’t get lower than two 1’s.)

I know, it is probably a reference to his keen eyesight and lightning reflexes, but the guy has nearly the worst luck possibly imagined:
• His squad is nearly wiped out in Vietnam, and he is badly injured on the way out.
• Gets home and his family dies on the highway on the way to pick him up.
• Joins a ninja clan and watches his mentor die in front of him.
• Tries to live as a mountain hermit, but gets recruited for a special ops group. (What could possibly go wrong??)
• Horribly injured in botched helicopter rescue mission.
• Extensive rehab and still can’t talk. Or walk around in public without a mask.
• Nearly blown up in an arctic mission.
• Tortured in the Brainwave scanner, but escapes by faking his own death.
And all that is BEFORE “Three Strikes for Snake-Eyes.” (Okay, technically we don’t know all of that yet, but chronologically, all that happened prior to this issue.)

The issue begins in the middle of a high speed chase on the streets of San Francisco. Despite the presence of pedestrians and other motorists, the Joes and Cobras are exchanging gunfire while engaged in the car chase. I’m not sure about public safety rules of engagement, but I’m pretty sure somebody in the military chain of command might frown on firing the V.A.M.P.’s machine guns and personal small arms fire while people are on the sidewalk near the van the Cobras are driving.

The next page has the Cobra van and V.A.M.P. drive through a car with the driver left intact in his seat. Yes, I think we need to agree that this is simply going to be entertainment. The rules of physics, as well as the rules of engagement are completely suspended.

As the car chase turns the corner, we turn the page only to find a nice elderly couple bickering at a stoplight where Eunice has stalled their car. Fred is not helpful with his commentary on her driving skills. And the Cobra van and V.A.M.P. are careening toward them with reckless abandon.

The Cobra courier jumps out at the last moment as the van obliterates their vehicle. The driver is somehow captured, perhaps following the family friendly cartoon philosophy of “everybody gets a parachute.” The Joes cover the driver, but the courier runs for it.
I’m referring to him as a courier, since he has a briefcase handcuffed to his wrist. It must be something important…and we will soon find that it is!

The courier wounds Clutch with a pistol shot to the leg. Then some biker thugs start beating up Clutch. Scarlett shoots off one of their earrings, and the bikers give up. But the courier is off and away.

Meanwhile, back at the crash scene, they are sifting through the wreckage. The van and packages reference the Naja Hanna Trading company. There is also a reference to a Senor K Winn.

Of course this is in reference to Kwinn, the Eskimo mercenary who worked with the Russians back in Issue 2.
There is also a reference that Naja Hanna means “King Cobra” in a particular language. Hawk and General Flagg work out a plan of action in Washington D.C. They will send a Joe team to Sierra Gordo.

Stalker and Breaker go undercover, with Snake-Eyes and Gung Ho watching over them from the tree-line. As they knock on the door, we see a perspective through Snake-Eyes binoculars. Dr. Venom answered the door.

Dr. Venom realizes they are no part of Cobra and deduces they must be Joes, since nobody outside those two groups knew the location. Snake-Eyes and Gung Ho are trying to get there to rescue them and a shootout takes place. Snake-Eyes and Gung Ho bump into Scarface, the Cobra courier, disguised as a local in a serape and sombrero.

Snake-Eyes takes out some Cobras but Kwinn disarms all the Joes except Snake-Eyes. His uzi is empty, so the fight is over.

Dr. Venom beats Snake-Eyes up by pistol whipping him in a maniacal rage. A Cobra guard indicates Snake-Eyes is not unconscious, but is actually dead. For most people, being dead would be rather extreme. For Snake-Eyes it is Strike 1. He slowed his heart-rate and breathing to feign death. Yes, he’s pretty good at it.

His body is tossed into a warehouse. The warehouse is locked, and set on fire. It is challenging to fake not getting burned alive. Strike 2.

Snake-Eyes cheats death again by getting to his feet while tied up and on fire, and kicking open a locked door, sprinting toward the river and jumping in. Evidently, “Stop, drop, and roll” didn’t want any of that.

He swims along which puts out the fire and frees himself from the ropes. He climbs aboard a fishing boat, and is mistaken for a river demon. 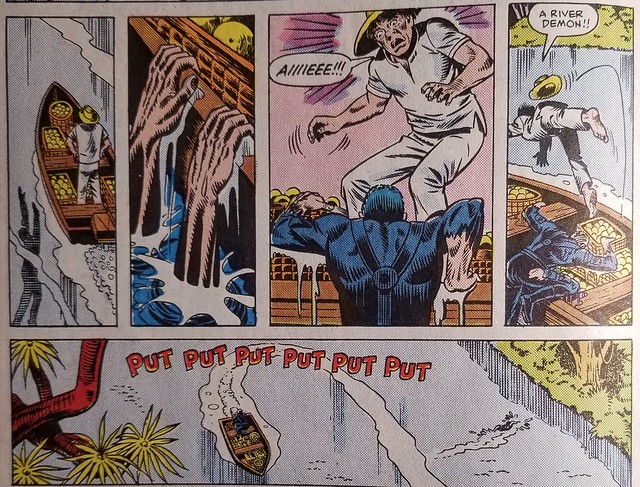 One of the hallmarks of Larry Hama’s thematic writing is the determination for heroes to succeed. Often he used the military radio lingo of “Charlie Mike.” The military used words to paraphrase other meanings with similar first letters. “Charlie Mike” stood for C and M. This is the abbreviation for Continue the Mission. Snake-Eyes wants them to continue the mission, and he plans to finish the threat posed by Kwinn and Dr. Venom.

The Cobras and Kwinn are inside a heavily secure bunker to complete their evil work and exchange the plague toxin and an additional serum for a larger Cobra ploy. Kwinn is pretty good, as he hears or senses Snake-Eyes’ arrival and opens up with his Browning .30 caliber air cooled machine gun.

Now I’m not a weapons expert, but from what I understand, opening up in a confined space like that would surely leave all occupants deaf, not to mention the smoke and possible concussive force. But once again, we suspend disbelief: it is entertaining!!

The Baroness and Scarface fly away in a sea-plane, but circle back to deal with the Joes and Snake-Eyes. Stalker, Gung Ho and Breaker try to shoot down the plane from the boat, and there is a side-ways nod to rival comic publisher DC “Sgt. Granite and Difficult Company” is an homage to “Sgt. Rock and Easy Company” which was a DC franchise WWII military comic.

G.I.JOE Issue 12 Trying in vain, to bring down that plane

Unfortunately, that brings the comic back to reality, as it is highly unlikely to bring down an aircraft with small arms fire. The Cobra plane drops a bomb and it descends toward the small island. Snake-Eyes is pummeling Dr. Venom, and Kwinn is asking him why he was sneaking up behind him with a cocked Luger pistol.

As the bomb descends and explodes, the issue brings us the Strike 3 for Snake-Eyes: the island is incinerated.

I really like this issue as there was humor, action, part of a continuing plot, betrayal, and death being cheated a number of times.

As we have discussed, Dr. Venom will continue as the evil scientist with his poison serums and maniacal tantrums. In the next few issues will see how Cobra’s plans unfold to use his deadly plague toxins.

Now You Know – a little more about “Three Strikes for Snake-Eyes.” Next week will be Issue 13, “The Last Plane from Rio Lindo.” Feel free to leave a comment or give your thoughts AFTER THE JUMP.
-YorktownJoe