Many people are looking for Scar-Face, the Cobra courier.

He slinked away after the Night Attack when he was betrayed by Dr. Venom, a homicidal maniac of a Cobra Scientist who left him to die in the Treasury building (or the Bureau of Engraving and Printing).

The Joes are hunting for him as they think he may lead them to other Cobra members.

Destro is looking for him because he believes he is integral to Cobra plans.

Kwinn is looking for him because he thinks he can get a clue to lead him to Dr. Venom and revenge. And Snake-Eyes came along for the ride. If Snake-Eyes could talk, he would have told Kwinn the ninja commando equivalent of “I told you so” or “You should have just let me drown him.”

Nearly everyone is hunting Scar-Face.

Okay, before we jump right in, I must say this is one of the best covers so far in the run. Destro and Cobra Commander are seen looking at a giant computer screen where it appears the Joe team has captured a lone Cobra, presumably Scar-Face. Destro appears to be affixing a sound suppressor to his pistol, or adjusting the front array of his laser weapon. It looks great! And it seems to be tipping Cobra’s grand plan. It has been hinted that Cobra wants one of their own captured so the Joes take him to their secret base. Then Cobra can track this action and attack the Joe team on their home turf. Once defeated, no one would be around to stop Cobra’s threats to the rest of the world. 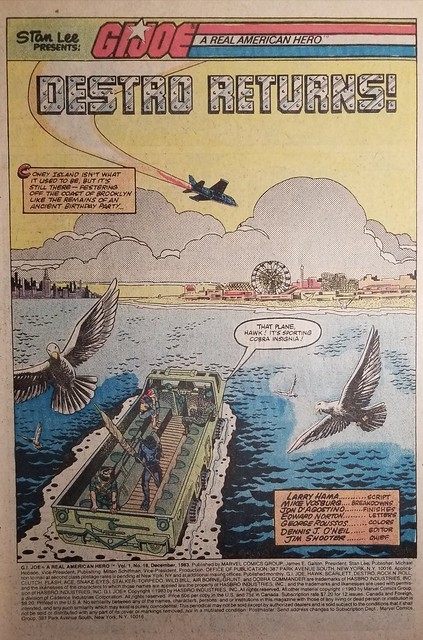 The issue begins with some kind words about the general condition of Coney Island. “Festering off the coast of Brooklyn like the remains of an ancient birthday party.” Larry Hama, you had us at “festering.”

The Joes are approaching by water in the A.P.C., a very versatile vehicle which remains as one of the most “solid” toy vehicles of the entire Joe collectible toy line. (I have the one I had originally from 1983 or 1984. I added a second one via eBay around the turn of the century. I highly recommend them.)

They notice a Cobra plane flying in. Looks like there’s going to be another party soon. 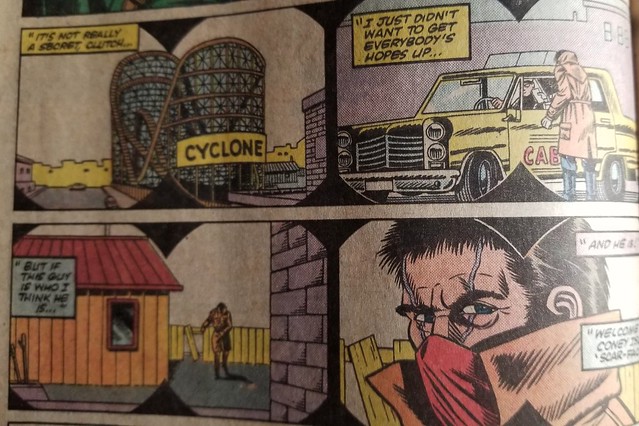 Hawk mentions he got a postcard from Snake-Eyes but he didn’t want to get everyone’s hopes up until they knew it was for real. As he spots Scar-Face through binoculars, he hands the postcard to Scarlett. 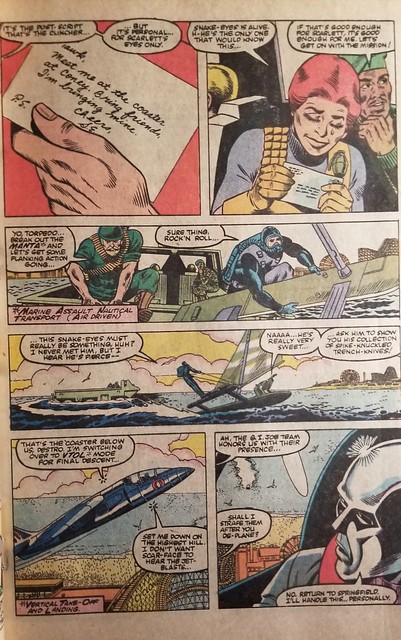 She confirms the postcard is really from Snake-Eyes. Rock ‘N Roll and Torpedo prepare a MANTA craft. It is basically a surf/paddle board with a stabilizer and a sail. It was available as a mail-away with FLAG points and a few dollars for shipping. My brother picked one up, and we sued it a couple of times. It looks cool for a display, but its play value was almost zero for the two of us.

At any rate, they use this “vehicle” to go ashore separately from the APC, for some type of tactical advantage, to meet the girls on the beach, to help Hasbro sell a toy, or secret choice D) all of the above. 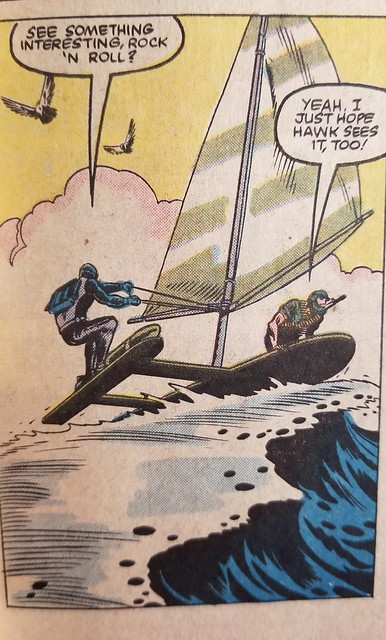 Destro instructs the pilot to hover and let him down on the top of the Cyclone coaster’s highest peak. The pilot notices the Joes and offers to strafe them for Destro. He declines, mentioning about taking care of it personally.
—
Kwinn and Snake-Eyes are a few blocks away in a pink Cadillac convertible that they won wagering on dice with degenerate gamblers in Miami. Kwinn mentions he only wants to talk with Scar-Face to lead him to Dr. Venom so that he can exact revenge. I guess he isn’t going to let that whole “Thanks for holding the door of the sunken bunker open for us, here’s a wrench to the head for your trouble” thing go.
—
The Joes are getting close to finally landing and spot Destro. Scar-Face spots him as well. Scar-Face opens up the welcome wagon by turning on the roller coaster. I’m not sure why no one is riding the rickety old condemned Cyclone coaster while plenty of people are gathered on the beach. You’d think at least one or two middle-school boys would want to ride? 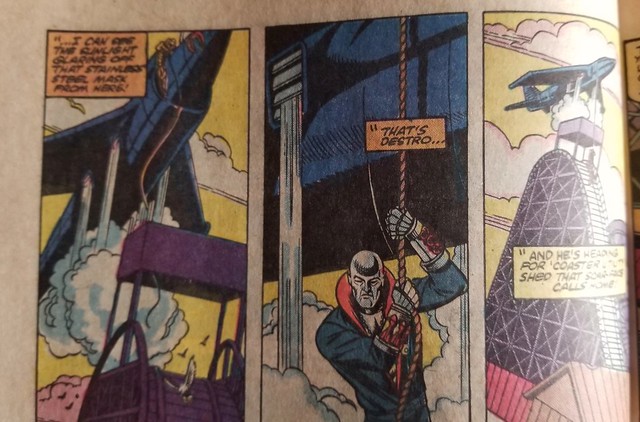 Kwinn tells Snake-Eyes some funny things about interrogation. He mentions subtlety and finesse while smashing open a chained fence door.
He also discusses gaining trust and manipulating emotions to lull people into a false sense of security. Then he kicks in the door and gives Scar-Face 3 seconds to tell him where Dr. Venom is before he rips him apart. 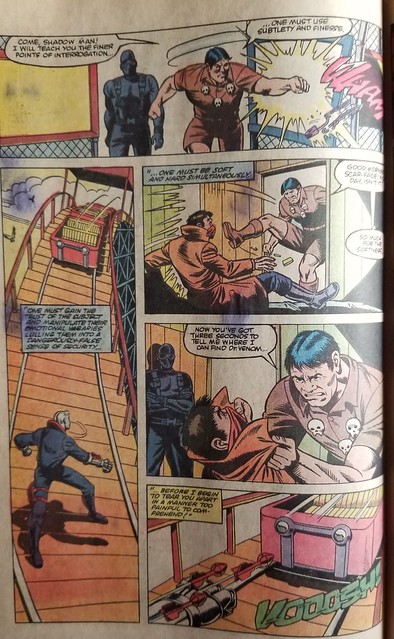 During this time, the coaster is bearing down on Destro, and he blows it up with a pair of wrist rockets.

Torpedo and Rock ‘N Roll comment on it raining coaster parts. Torpedo gives the best line of that page: “Too bad. Better if it were raining Destro parts.” Torpedo is such a kidder. 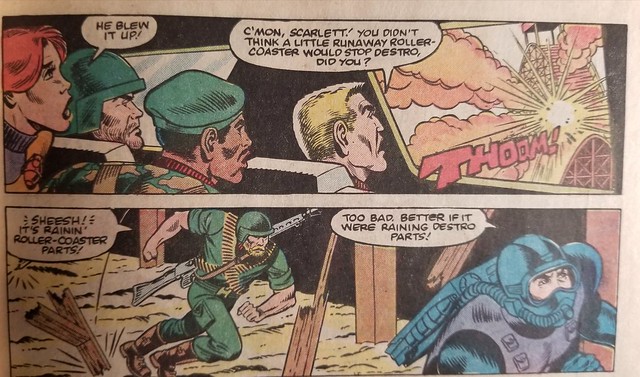 Destro fires another wrist-rocket at the Joes, who take cover. 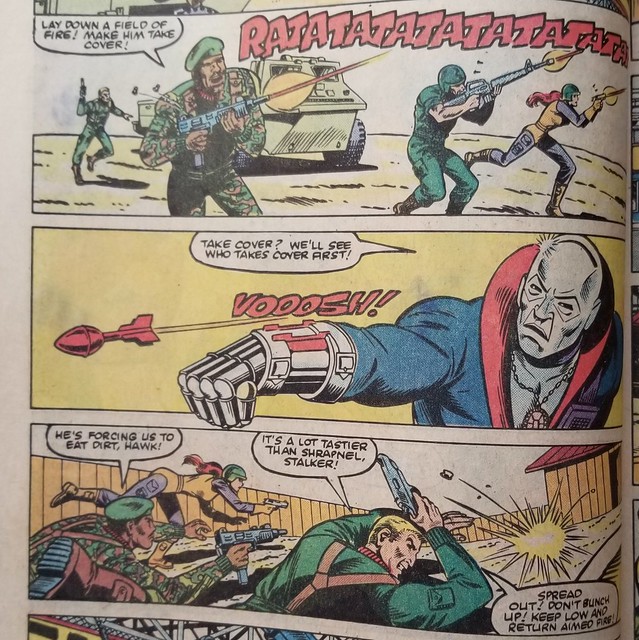 Kwinn passes the keys to the Cadillac to Scar-Face, and he and Snake-Eyes decide to head for a reunion with Dr. Venom. I think Snake-Eyes realizes that no one will be safe as long as Dr. Venom is still polluting the air with his breath.

Destro jumps a fence and commandeers an ice cream truck. The Joes follow in the APC. Snake-Eyes and Kwinn climb aboard a train. 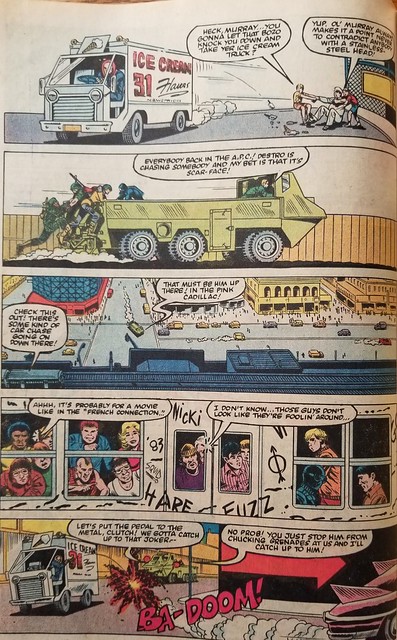 Rock ‘N Roll can’t shoot through the ice cream truck, so he shoots out the Cadillac’s tires. It crashes and Destro snatches Scar-Face when he tries to flee.

Gas spills out of the wreck and it blows up, tipping the APC on its side. But as I mentioned before, it is sturdy. A truck driver helps them get it upright and they try to proceed. Some time must have passed, as a police officer flags the Joes down and tell them two terrorists have hijacked a plane and plan to take it to Libya.
—
Destro and Scar-Face are planning their hijacked flight to Libya (a long time haven of terrorists of various political beliefs).

—
The Joes, minus Torpedo, are prepping for a mission to Libya to follow. 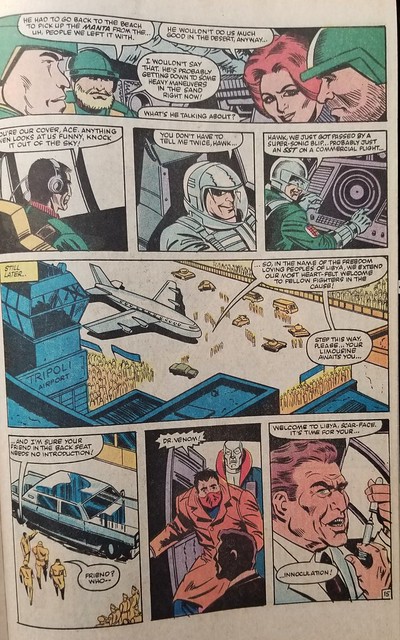 Destro and Scar-Face land and are welcomed in Tripoli, Libya. Destro called ahead for Cobra to pick them in a limo. And who is in the limo waiting for them?
Dr. Venom, of course. 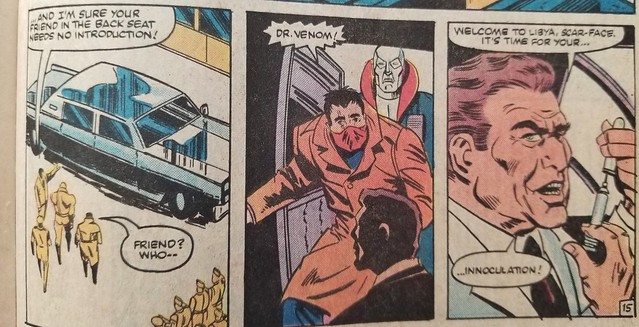 Which is great, since Libya and other parts of North Africa are known for mosquito borne illnesses. No one wants to get malaria or Yellow fever.
But I don’t think the injection Dr. Venom was going to give Scar-Face was a vaccine. Not even a flu shot. 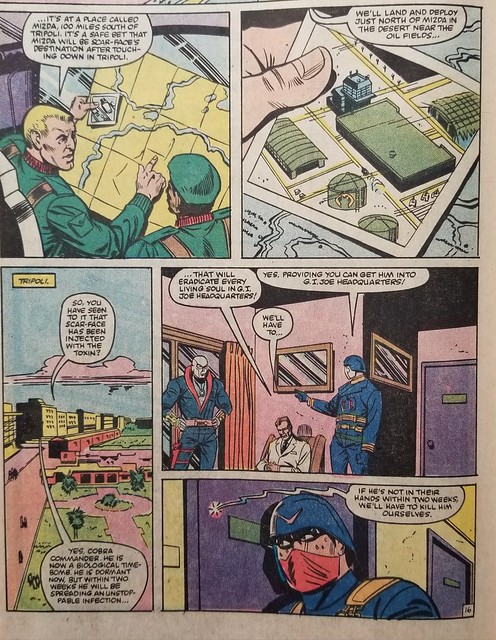 Scar-Face overhears Cobra Commander, Destro, and Dr. Venom discussing his terminal condition as a carrier of the updated plague toxin virus. He is nervous and sweating. But he is supposed to be okay for 2 weeks. The hope is he will be captured by the Joes and taken to their headquarters. But then the Joes will all catch the plague and die. Very nice. Unless your name is Scar-Face. When he joined Cobra as a courier, I think he planned on a career of ferrying messages among the high command and maybe doing some light spying in a world of intrigue. I don’t think he planned to be a guinea pig viral agent and have his cells internally bleed out.

—
The Joes are taking much longer to get to Libya, and they have info about a secret Cobra base 100 miles South of Tripoli. I think they are keeping their eyes on the prize, but I feel bad for that passenger plane full of hostages that got left at the Tripoli airport. I’m sure the lovely government of Libya will get them home to America. Eventually.

If only America had a Special Counter-Terrorism Strike Force Code Name Delta that could rescue them! Yes, if only.
I digress. 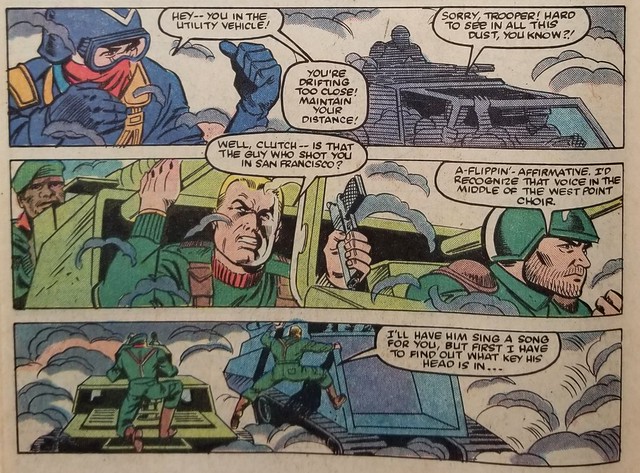 The Joes make a plan to intercept Scar-Face as he travels from Tripoli to the southern base.

In all the clouds of dust kicked up by Cobra’s armored column, the VAMP sneaks up and Hawk jumps out onto the HISS tank. He clunks Scar-Face on the helmet with the handle of his .45 and brings him over to the VAMP. Somehow the dust affected the Cobras on the ground, but not the Joes in the VAMP. 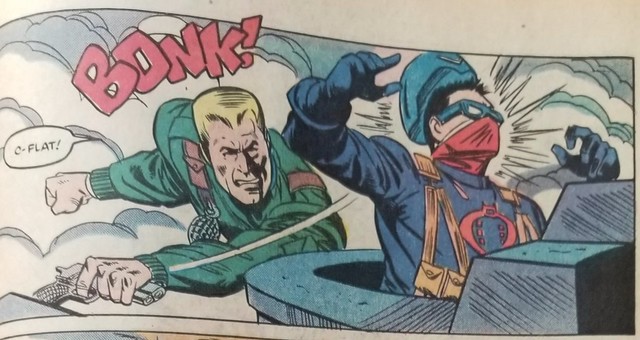 Wild Bill and Airborne start shooting with the Dragonfly and Wild Bill instructs him to miss on purpose since they can’t tell which vehicle is which in the cloud of dust. So the dust did affect the air cover’s ability to see, but not the VAMP.
—
Destro notices the Joes escaping with Scar-Face but Scarlett blasts him with the Gatling cannon on the RAM motorcycle.

Scarlett and Grunt jump from the RAM to the VAMP. Clutch was driving, Hawk was riding shotgun with Scar-Face captured between them. Stalker helped Scarlett and Grunt get aboard just in time to secure the winch and getaway. They attach the winch hook from the Dragonfly and fly away.
Destro laughs to himself and makes a comment about the Trojan Horse story. Scar-Face is the horse and the Joes are doomed. 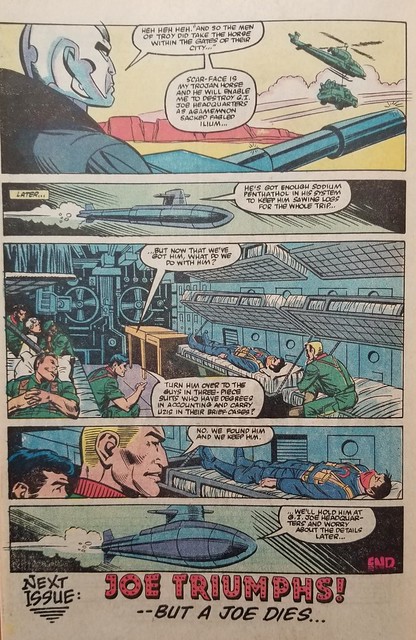 In the closing scene, we see the Joes aboard a submarine headed back to America with Scar-Face as the prisoner. They speculate as to whether they have to give him to the CIA or not. But Hawk is going to fall right into Destro’s trap and bring Scar-Face to Joe headquarters
—
The tease for the next issue is JOE TRIUMPHS! – But a Joe dies…
Hey, thanks for the spoiler alert at least.

—
Proposed Public Service Announcement
“Remember kids, if you capture one Cobra courier, no one will remember you left an entire plane full of hostages back in Tripoli!”
“Now we know!”
“And knowing is half the battle.”
—
This was another great comic and very entertaining. There are very minor issues with timing, and the whole leaving the plane and hostages. But Larry Hama again delivers much more action than the cover price. It was awesome, all the way around. And a great cover. Outstanding!
Now You Know – a little more about “Destro Returns.” (aka “Coney Island” aka “Scar-Face has a REALLY bad day.”) -YorktownJoe

Join in the conversation AFTER THE JUMP!