Last issue Cobra Commander escaped due to Storm Shadow’s tenacity and self-sacrifice. During the issue, Major Bludd revealed to Destro and the Baroness that he hid a transmitter in the handle of Storm Shadow’s sword. They were planning to track where Storm Shadow had gone to try and rescue the Commander. They sent Firefly and a man in red known as “the pilot” (Wild Weasel) to the swamps near the Everglades where the transmitter signal was pinging at a shack.

As the issue drew to a close, the Commander had returned, and he mentioned that the shack in the swamp belonged to someone he knew. And he wasn’t fond of trespassers.

The tease last issue was that the Joes would face there most unusual foe yet, and there was a small picture of a mysterious cowl wearing figure holding Firefly and the pilot at gunpoint. 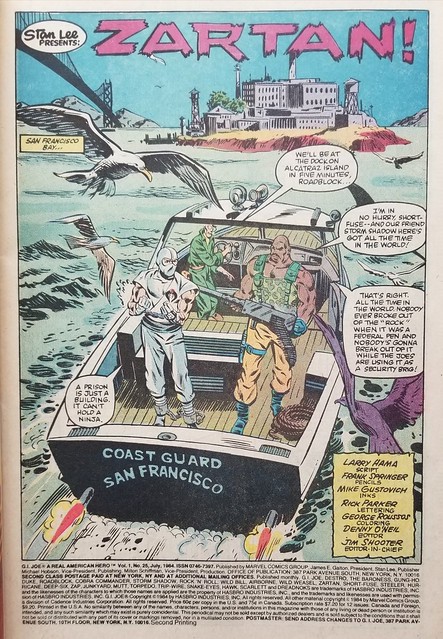 On the title page we see a small San Francisco Coast Guard boat heading out towards Alcatraz. Short-Fuse, the Mortar Soldier is at the helm. Roadblock has Storm Shadow shackled, and at gunpoint. Roadblock is bragging that no one escaped from Alcatraz when the feds ran it, and no one will escape while the Joes are using it as a brig.
Storm Shadow jeers back that no building can hold a ninja. 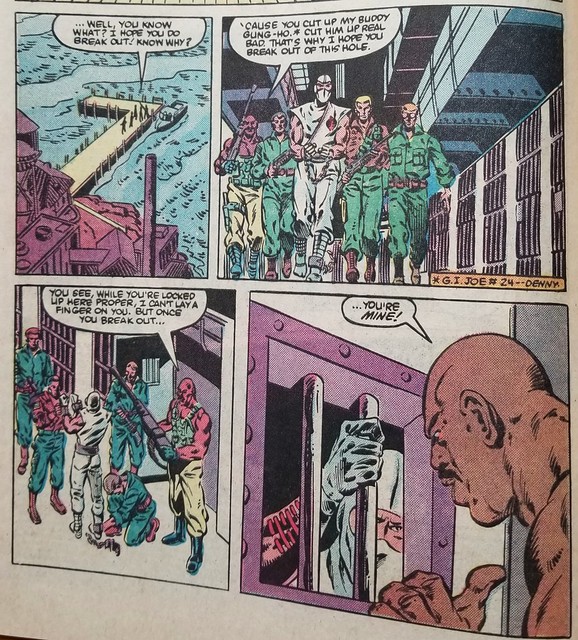 There is more macho exchanges between Storm Shadow and other Joes. Roadblock mentions he almost hopes Storm Shadow breaks out, since he can’t hurt him while he incarcerated, but if he was on the loose, it would be another story.
—
Meanwhile, Destro, the Baroness, and Cobra Commander are riding toward Zartan’s lair in the Florida Everglades. A regular old Cobra trooper is piloting the Water Moccasin. The trio is riding in the turret of the fan boat. The actual toy Hasbro produced only held a single figure in the turret. And that toy came with a named pilot: Copperhead. Frequently, the comics put figures in situations that the figures and vehicles could not reproduce. But it would be the only way these characters could carry on a dialogue as they travelled. 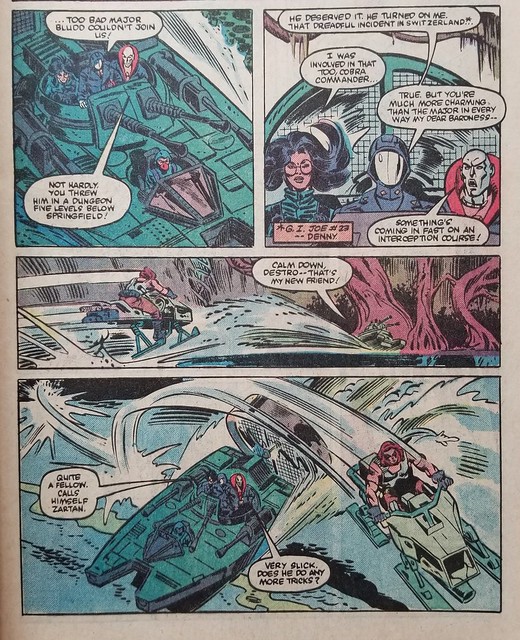 Zartan comes swooping in on his Chameleon swamp skier mini-vehicle. He hops over the Water Moccasin, and Cobra Commander tells Destro that his new friend so he doesn’t shoot at him.

They pull up to Zartan’s lair, which appears to be a rundown shack in the middle of the swamp. But as they entered, Zartan reveals that it transforms into a high tech modern facility. 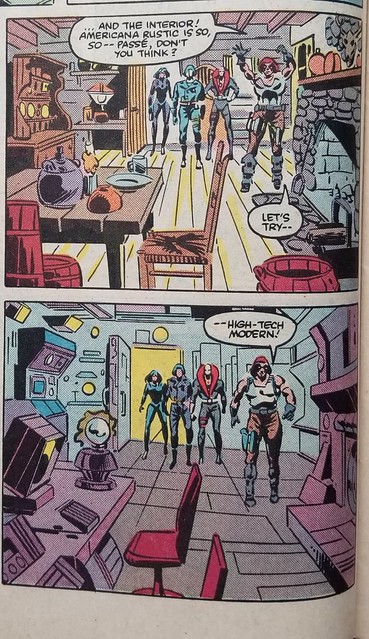 In the Gulf of Mexico, the Joes are preparing for a mission on a freighter. Wild Bill and Zap are walking and talking and several new Joes are mentioned, pictured, or referenced. Cutter is well thought of and Deep Six is alleged to be rather cold.
Mutt & Junkyard are introduced, and it is mentioned that Mutt (the handler) is the one wearing the muzzle, since he is the one who bites! 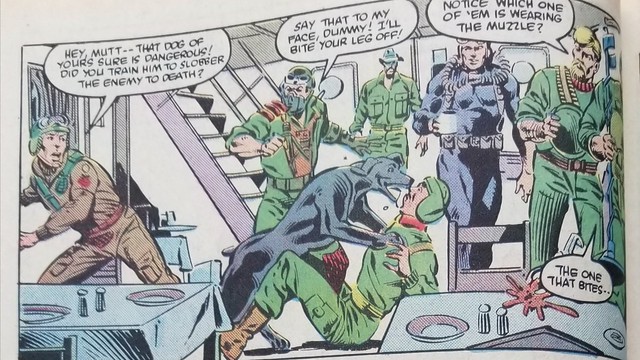 We see Snake-Eyes is visiting Gung Ho in a deserted wing of Bethesda Naval Hospital in Maryland. Gung Ho is happy for the gumbo and mentions that the Cobra ninja who cut him up had a similar tattoo as Snake-Eyes. He mentioned the ninja called himself Storm Shadow. And suddenly, Snake-Eyes was gone. 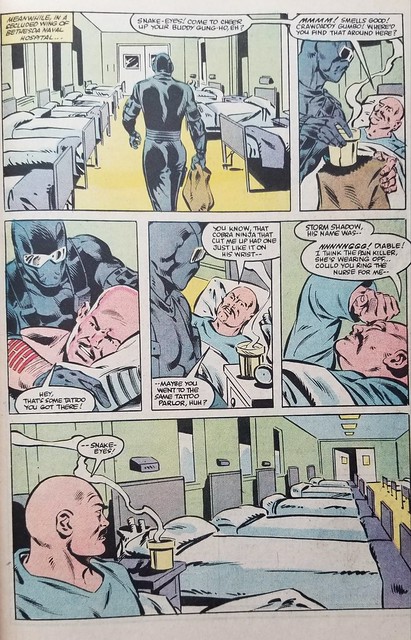 Back at the G.I. Joe HQ the Pit, Hawk and Scarlett are discussing the mission in the Gulf of Mexico. They tracked down a location based on a shipping receipt that Storm Shadow had in his pocket when Roadblock captured him last issue. They hope the location holds a clue as to where Cobra Commander went after he was freed from custody (also, last issue).

As they are discussing the mission merits, a call comes in from Gung Ho that Snake-Eyes and Storm Shadow are somehow linked. Hawk immediately calls Duke and Roadblock at Alcatraz to warn them. 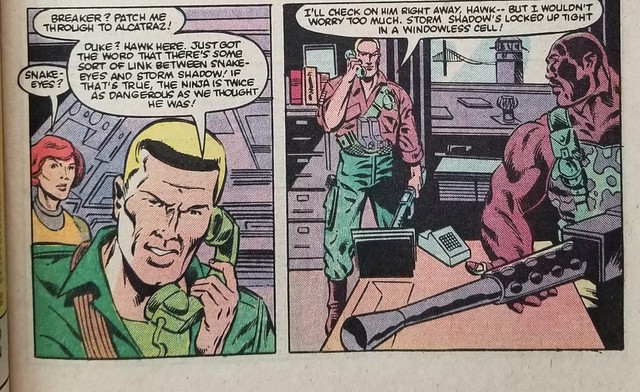 The mission preparation transitions into a launch and 2 Dragonfly helicopters are away to drop some Joes in for a recon. There are a few pages with jokes about Mutt & Junkyard, and other pratfalls of Tripwire being clumsy, but they aren’t the main focus of the issue.

Back at Zartan’s cabin, Firefly and Wild Weasel are brought out from their confinement. Zartan sarcastically praises Firefly for his skills and reputation. 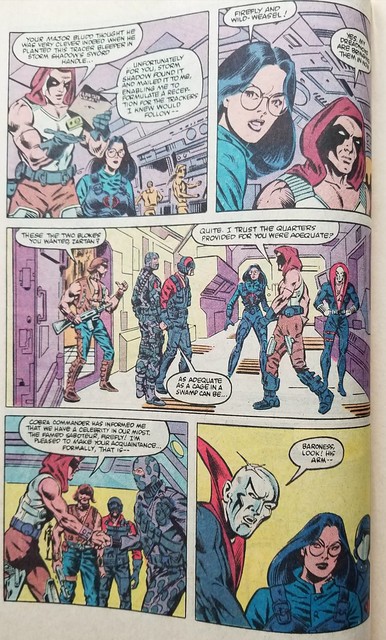 Then he shakes Firefly’s hand… 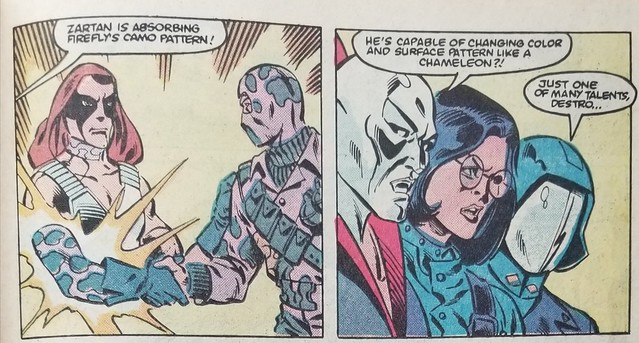 We get a small glimpse into Zartan’s abilities and holographic skills. It is interesting that he is able to absorb the colors of Firefly’s gray camo fatigues. It is more interesting that the camo pattern appears to be draining away leaving Firefly with plain gray. But anyone who can make a high tech headquarters appear to be a swamp poacher’s abandoned shack HAS to have some tricks up his sleeve. Or in this case, ON his sleeve. 😉
—
The Dragonflies drop off a premier recon team of Torpedo (Navy S.E.A.L.), Mutt & Junkyard (M.P.’s??), and the ever graceful and lithe Trip-Wire (Mine detector and E.O.D.). What could possibly go wrong? 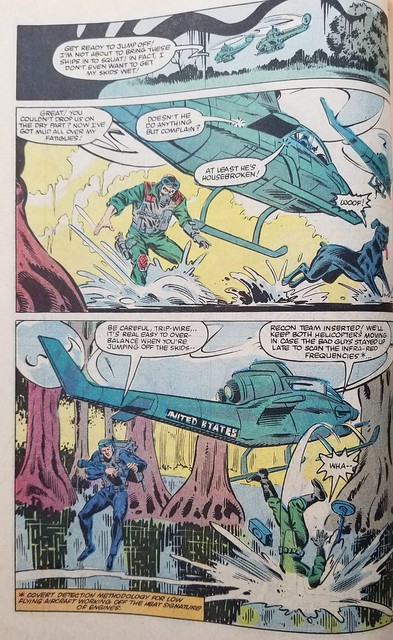 The Water Moccasin shows up with the curious pair of Wild Weasel and Firefly at the controls. It is difficult to tell as things happen really quickly, but I think Wild Weasel is piloting/driving and Firefly is in the turret. But it appears Wild Weasel also has some guns ready, which could be the side cannons. I’m not really sure, as the boat gives 2 helicopters the slip, but Deep Six suddenly appears with the S.H.A.R.C. vehicle. It was to have the ability to submerge as a mini submarine, float on top of the water and fly in the air. That way kids who bought the toy could fly it around (in their imaginations) even without a creek, stream, or reliable water source in their area. 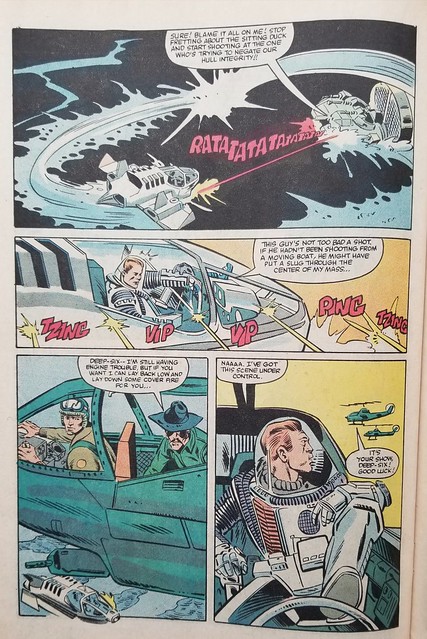 Wild Bill offers to help Deep-Six, even though they are having engine trouble. Deep-Six lets him know he has it covered.
He then demonstrates the skills of the S.H.A.R.C. by diving under the water and popping back up, swooping down and blowing up the Water Moccasin just as Firefly and Wild Weasel bail out. 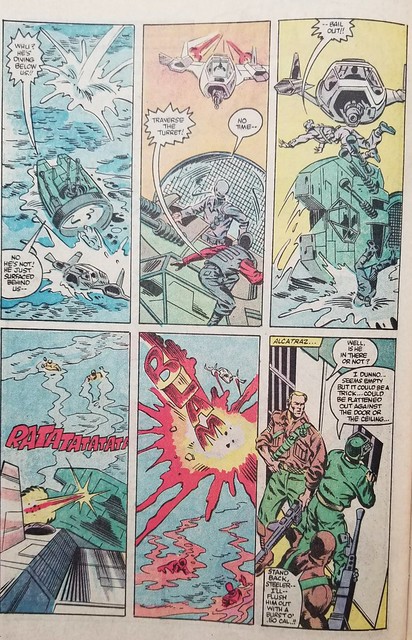 Back at Alcatraz, Duke and Roadblock and the security team are checking on Storm Shadow’s cell. Steeler is trying to use his advanced helmet optics to see if Storm Shadow is in the cell or not. Roadblock offers to give a short burst of .50 CAL into the cell. I’m not a munitions expert. But I imagine the concussive force of a .50 CAL in a confined space like a concrete prison cell would render any occupants unconscious, with permanent hearing loss.
—
Back at Zartan’s lair, Baroness is criticizing Cobra Commander’s new friends. His Water Moccasin has been destroyed, and Firefly and Wild Weasel are on the run in the trees with no Joe casualties. They have an exchange about loyalty and betrayal. Cobra Commander changes the subject quickly, as he doesn’t want Destro to know what he did way back in Issue 16. 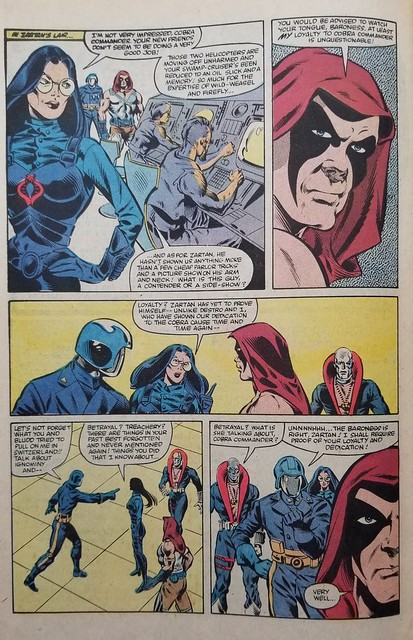 Junkyard initially proves himself helpful by chasing Firefly and Wild Weasel up a tree. But now the recon team has two prisoners, and they can’t go marching around with them. Junkyard licks Mutt’s face, but then takes off running again.

At Alcatraz, the Joes discover Storm Shadow is indeed gone. All those high tech vehicles and equipment and they couldn’t bother to find a video camera or post a guard? Wow. That being said, he is a ninja…

Back on the Joe freighter, Deep-Six returns and Wild Bill comes over to congratulate him on his flying and shooting success. Deep-Six leaves Bill’s hand hanging, unshaken. Wild Bill gets his dander up and has to be restrained from punching the uppity Deep-Six. The other Joes mention that is just the way he is. Deep-Six is heroic, but not a people person. This causes conflict on teams where cooperation and building camaraderie is essential to mission success.

Back at Zartan’s lair, Zartan and the Commander continue their discussion on loyalty when there is a knock on the door. It is Junkyard. He is looking for treats.

Zartan raises his pistol to put the poor stray out of its misery and…
…will you look at the time, kids!! We’ll see you next issue! 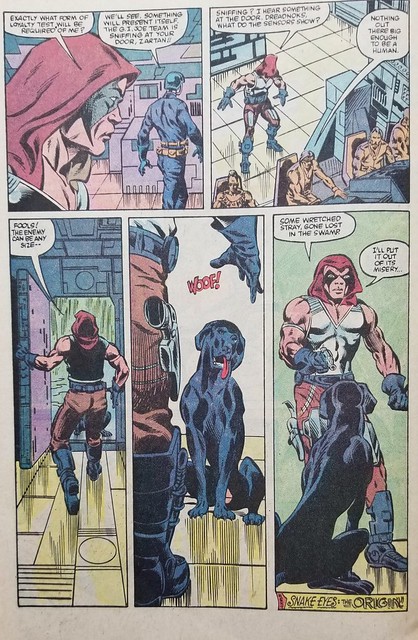 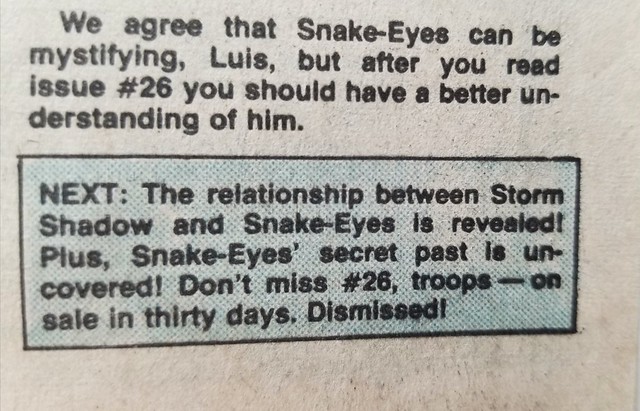 More information about Snake-Eyes and Storm Shadow’s past and how they are linked is on the way in the next issue!
This issue was good, but it had a few head scratchers.

Tripwire would be an excellent choice to help check out an ABANDONED Cobra base and deactivate any “surprises” they may have left behind. But sneaky recon? Really?

Torpedo was a solid choice for a recon on this area with his water skills, and being a S.E.A.L. and all. But altogether, this seems to be rather sloppy for mission design.

And what were the Joes at Alcatraz doing that was more important than watching the one and only prisoner on the island? Playing poker? Drinking Yo Jo cola? Unclear. But this would be up for review of dereliction of duty.

So quite a few questions raised, but many new characters and vehicles were introduced or beginning to be developed.

Now You Know – a little more about “Zartan!” Feel free to let me know what you thought of this issue in the comments AFTER THE JUMP.