In Issue 31, we were left with a cliffhanger. Snake-Eyes cabin was blown up with Timber and the main man inside! Just outside, but well within the blast zone are Destro, Firefly, and a Crimson Guardsman named Fred Broca. Spirit and Airborne from the Joes are there as well. The battle had gone down to the last man, and a bomb had just exploded, gravely depreciating the value of Snake-Eyes‘ cabin. 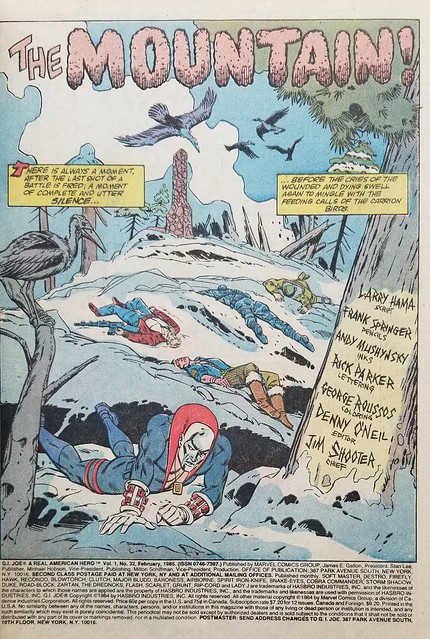 The issue begins with the wounded picking themselves up and trying to return to consciousness.

On the next page, a mysterious mountain hiker stumbles upon the injured men and begins tending to Spirit. 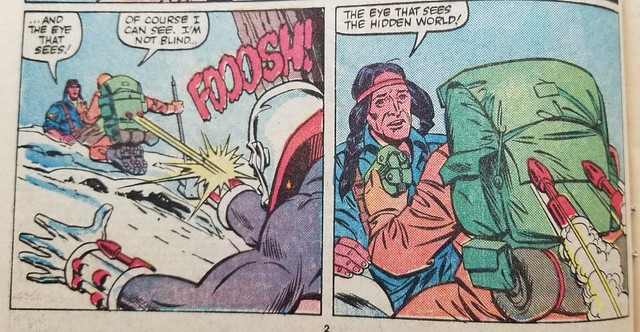 Spirit asks him if he is a healer or a medicine man, but the good Samaritan defers and indicates he has some antibiotics, herbs and aspirin.

Destro looks unkindly upon any assistance to the enemy. To be fair, Spirit and he had exchanged gunfire at very close range at the end of the last issue. 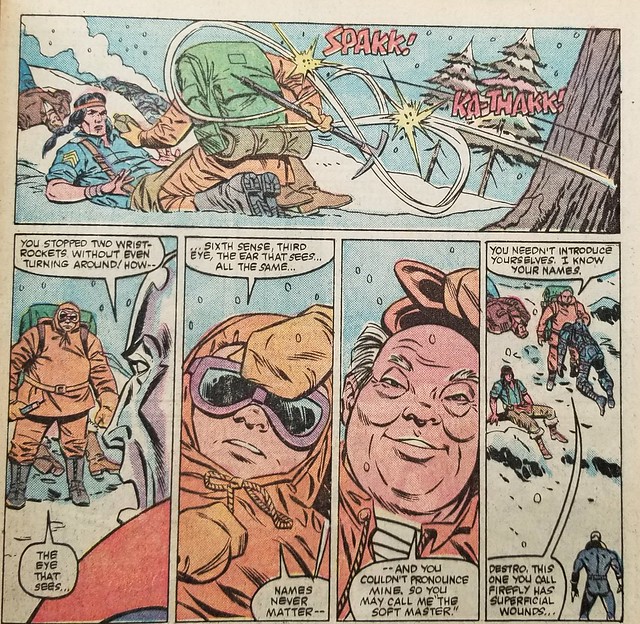 This is not a man with whom to mess. 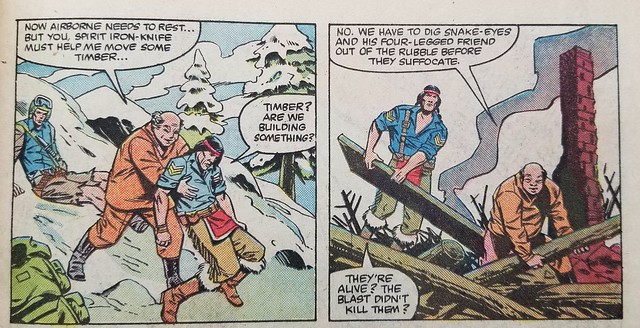 After tending to Airborne, the Soft Master enlists Spirit to help clear lumber off of the pile that was once Snake-Eyes Cabin. Spirit is incredulous.

The Soft Master and Spirit clear away the debris and find Snake-Eyes hideout in the basement of his cabin underneath a heavy oak door.

There are multiple pages recounting the Dreadnoks activities in Issue 30 at McGuire Air Force Base. The Dreadnoks are worried Zartan is angry with them, but he is focused on where they are headed. 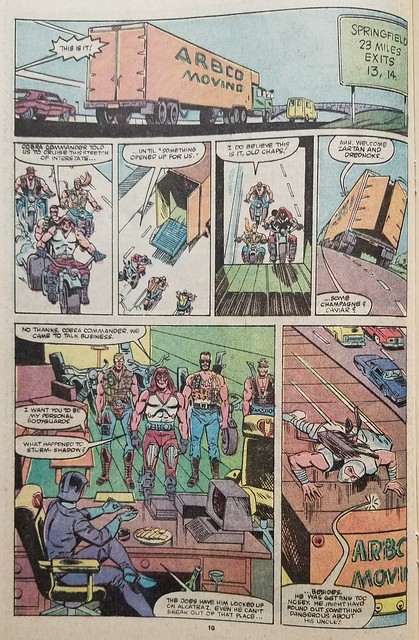 The Dreadnoks and Zartan board the Commander’s luxury suite coach disguised as an ARBCO moving truck. He offers them refreshments and security job opportunities.

Back in the 80’s there was an arcade game named Spy Hunter where you could ride your Bond-like car into the back of a semi. These panels kind of remind me of that.

Storm Shadow is riding on top of a semi moving at highway speeds and can eavesdrop on a conversation inside a luxury suite in the semi.

He truly does have good hearing.

Back at the site of the cabin…

The rest of the issue will be great I’m sure, but I was so relieved seeing Snake-Eyes and Timber alive, I could hardly contain myself as a young reader back in the day.

Amazing!! He survived bullet wounds and the charring burning inferno of his cabin, but somehow he is going to be okay!! And Spirit assesses his injuries and provides a prognosis for recovery in less than 30 seconds. 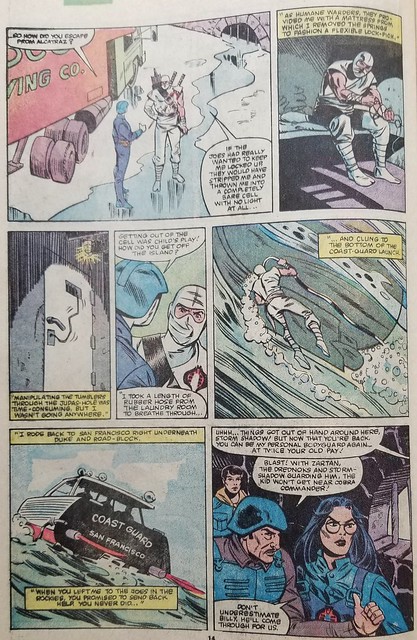 The moving truck arrives at an underground parking area in Springfield. Storm Shadow surprises the Commander after he mentions the ninja is stuck as a prisoner in Alcatraz (Issues 24 and then 25.) Storm Shadow recounts in a flashback how he “escaped from Alcatraz.”

Major Bludd and the Baroness are startled by his arrival, since they were plotting (and actually practicing) an assassination for the upcoming pep rally at the local high school. (This is actually a Cobra rally, as the whole town is in on it.)

Back at the cabin ruins…

Fred appears, and has tracked blood all the way back. (He had been shot in the chest by Spirit in the previous issue’s battle.) The Soft Master confronts Fred, who has come back to finish off the remaining Joes. He was leaving quite a blood trail in the snow to get back to the cabin. Evidently, his wounds were more than superficial.

But from the number of bullet wounds in his chest, he seems to be doing pretty well in these few panels. 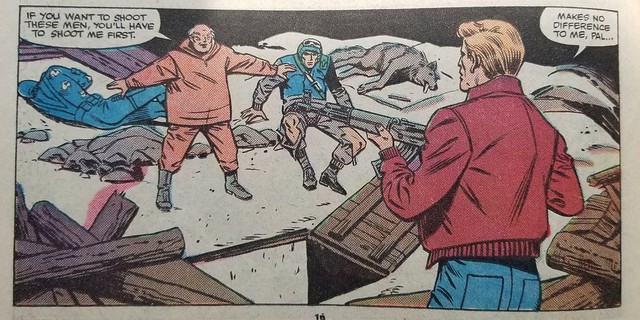 The Soft Master continues talking and lets Fred know he will need to go through him before he hurts Snake-Eyes, Airborne, or Timber. 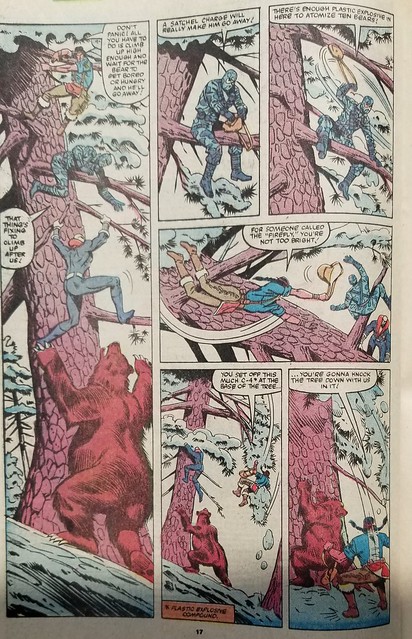 Destro and Firefly stumbled upon Spirit who warned them to be quiet and go away.

They startled the Grizzly bear Spirit was trying not to disturb.

Then the bear has chased Spirit, Firefly, and Destro up a tree. Firefly sets another bomb up to blow up the bear. Spirit stops him, grabs the pack and flips down to put the bomb on the bear and lure it away. 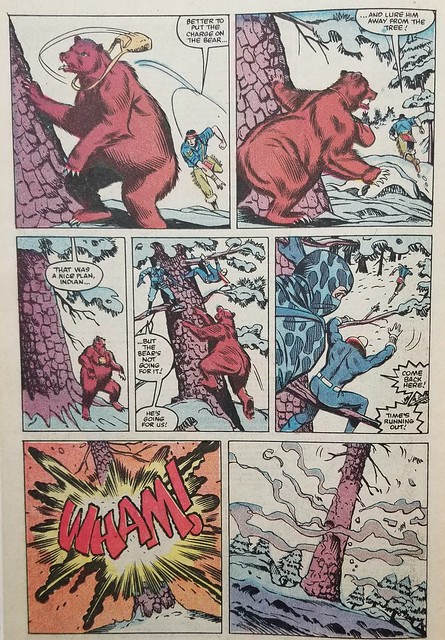 Spirit makes a valiant effort to throw the satchel charge of C-4 onto the bear and lead the Grizzly away. But the Grizzly is looking for a Cobra contractor flavored steak.

The explosion at the base of the pine is amazing. 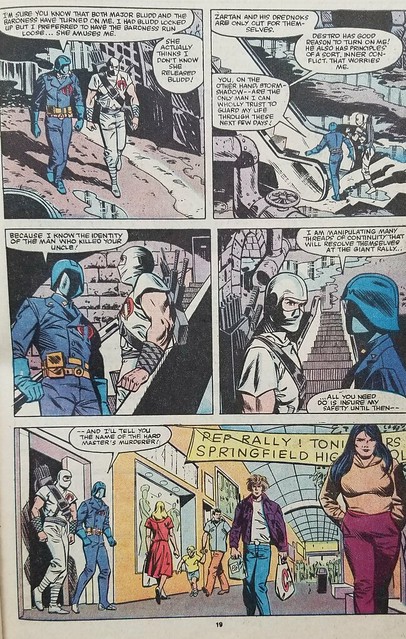 The Commander is lying, and Storm Shadow knows it. 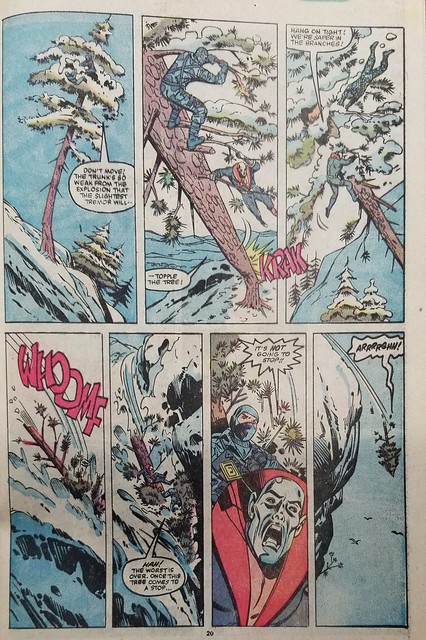 But gravity is no respecter of cool comic heroes or villains.

It was nice knowing them… 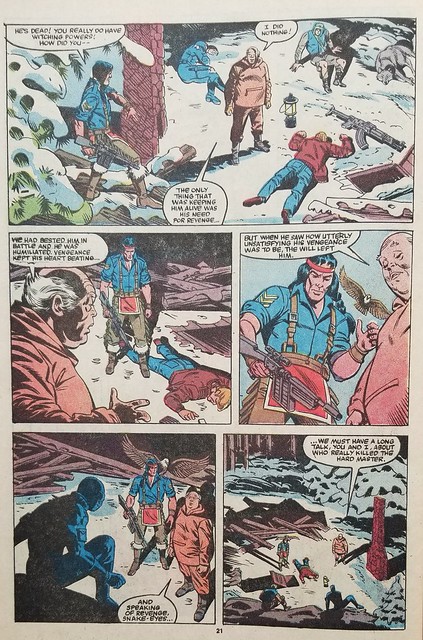 Back at the ruins of the cabin, Spirit discovers Fred is dead. The Soft Master gives an explanation that vengeance was keeping him alive, and once he so how unsatisfying that would be, the will to live left him.

Either that, or the loss of blood from his multiple gunshots wounds to the chest in the previous issue.

Come to think of it, a ninja grand master who can deflect wrist rockets without looking could certainly have thrown a splintered stick at a woozy, dying Crimson Guard to finish him off, right?

We’ll just say he keeled over. 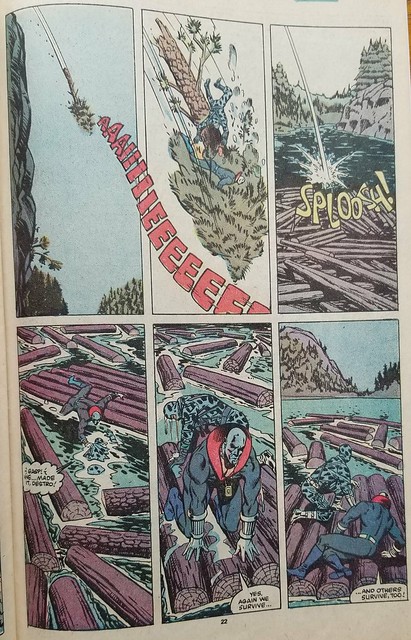 Aaaaaaaaaaaaaaaaaaaa! Sploosh! Don’t worry about physics, terminal velocity, or gravity. It’s a comic! And they survived.

Interspersed through the issue, we have cut backs to the PIT where preparations are underway for review by some upper brass. I’m unsure why a hidden military base of a top secret anti terrorist group would risk the leaks inherent with entertaining guests, but hey, to each their own.

Ripcord and Lady Jaye are introduced and Lady Jaye and Scarlett immediately have words. Unlike the cartoon, there is a terse exchange between them, and they have all the tact and manners of a strafing run: “We’re your replacements.” Not team-mates, not fresh trainees here to learn from your experience. Not even supplemental counterparts for special mission deployment. Nope, just your replacements.

…and not to be overdone by the Joes, the final page: 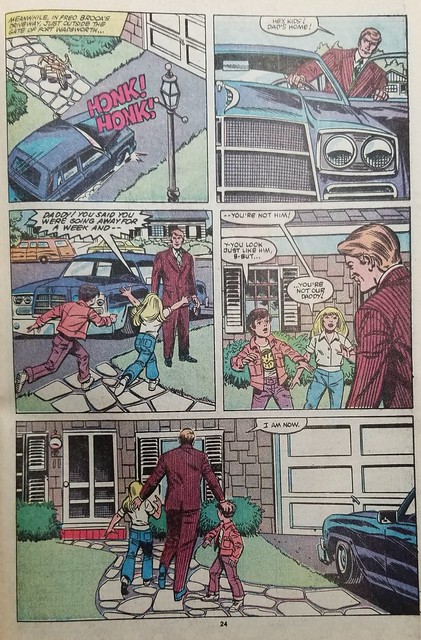 Okay, hold on just a second. Destro and Firefly just barely walked away from an explosion, serious wounds all around. They climbed a tree to avoid a Grizzly bear, survived another explosion, a fall from a tall tree, a fall over a cliff and into water where they floated into a logging operation. And we are to believe they busted out a phone call to Cobra Central in Springfield, and gave a report that wounded Fred was probably dead and they should notify the family. But instead of notifying the family, they have replacement Crimson Guards who have had plastic surgery to look like each other and that they were able to send one of these guys to the Broca family residence right next to the PIT by the next panel to end the issue?? It took Destro and Firefly about 3 issues to make it from the Everglades back to Springfield, but Cobra Logistics are able to pull off a replacement Crimson Guard in mere minutes.

Again, we don’t even get a “to be continued,” or a teaser for the next issue.

This was a good issue, but I’m not sure why the Dreadnoks and Zartan received the cover billing. A picture of Destro and Firefly in a tree with a bear at the base would have been great! But not all issues have covers that indicate the main thrust of the story. And at least they did appear in the issue.

Overall, I enjoyed the 2 part story arc very much. Glad Snake-Eyes survived! Seeing how fantastic the Soft Master was thrilling. And we stir in some Cobra assassination intrigue, and re-introduce Storm Shadow, Zartan and the Dreadnoks, the Baroness, Major Bludd and Billy.

There is a real sense that something will be coming to a head just around the corner.

Now You Know – a little more about: ”THE MOUNTAIN!” Feel free to let me know what you thought of this issue AFTER THE JUMP.

0Shares
0 0
One comment to “NOW YOU KNOW WITH YORKTOWNJOE – G.I.JOE MARVEL ISSUE #32 REVIEWED!”