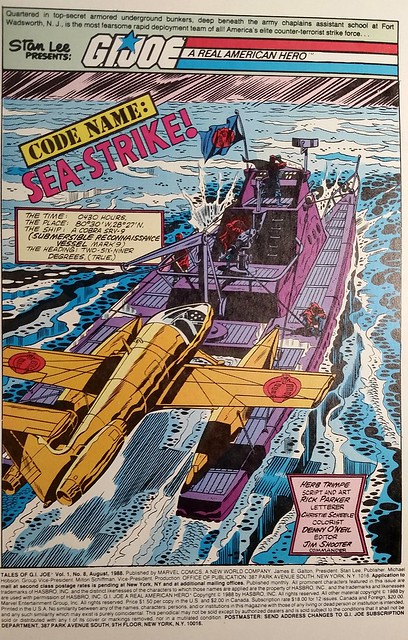 This issue diverges from the developing plot line and is a stand-alone issue. Herb Trimpe, long time Joe artist is credited with the script for this issue. Larry Hama’s name is not attached in the credits. The issue contains plot twists, secret underwater bases, outer space adventures, some vehicles we never saw as toys, along with a few near death experiences for some key members of the cast.

On to the issue. As teased above, the story opens with some Latitude and Longitude coordinates. I actually researched this on the internet and determined the coordinates actually point to a location just off the Atlantic coast and very near Cape Canaveral (where most NASA rocket and space shuttle missions blast off). And since Cobra Commander is on an interesting looking boat/ship, it stands to reckon Cobra is up to no good. 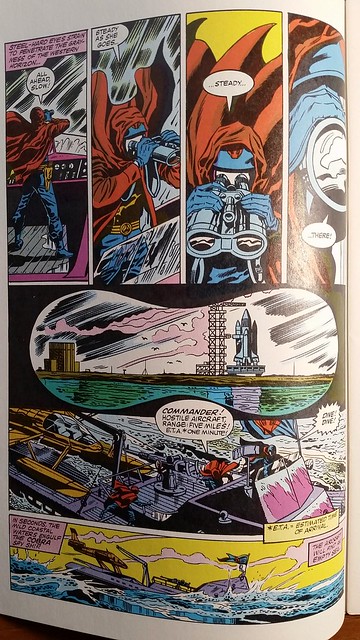 The Commander is peering at the Space Shuttle through binoculars on the deck of his vessel, which appears to be towing a sea-plane with skids. At the last minute, he breaks off his plans and dives away. Evidently, the vessel is also submersible.
Although the comic began with precise coordinates, the segue way to the Joe team just begins benignly with the ever descriptive adjective: “Elsewhere…”

The Joes are training in an arctic situation and are bundled up for it. There are a few snowballs and words exchanged, then Hawk appears in short sleeves to start ordering people around. Their mission is to destroy an underwater sea base. There is griping about training in the cold and being sent off the coast of Florida. 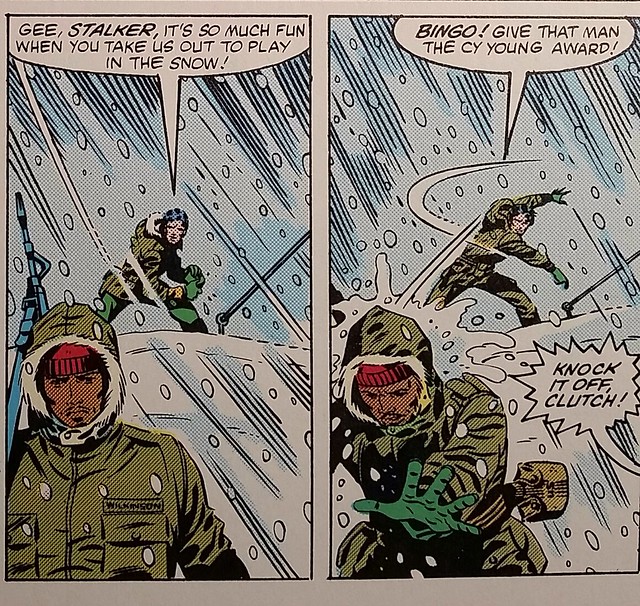 Next we have a glimpse of the Cobra underwater sea base. Cobra Commander arrives with his vessel and sea-plane in tow. The Baroness, Cobra Commander and some leaders assemble to discuss their evil plans, because that is what bad guys evidently do. They are planning to launch orbital missiles that will fly around and then could be fired (dropped?) at any target on earth. 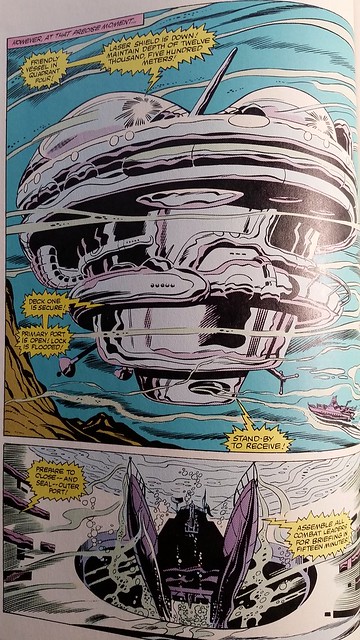 They plan to shoot the space shuttle at the Kennedy Space Center because it has a satellite it was going to launch to help with the struggle against terror groups like Cobra.

When we see the Joes next, it looks like they are getting set for keeping the launch secure. And it looks like they still have the RTV (Arr-Tee-Vee) from the Afghanistan mission and are using it to unload and stage some of their gear. 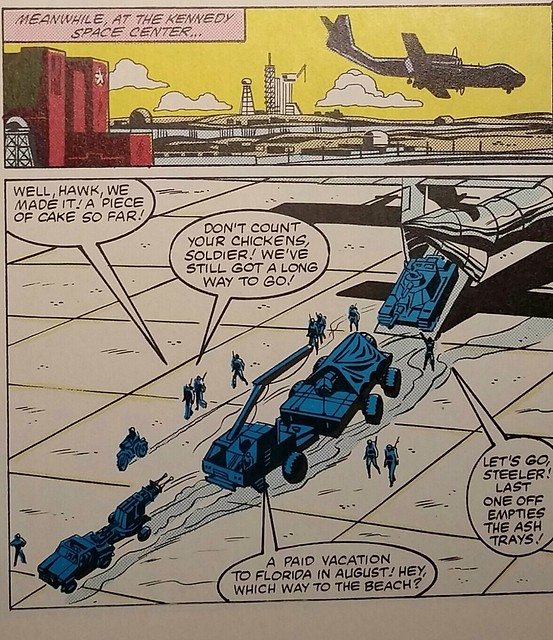 Some Joes are skeptical that Cobra would attack and are joking about enjoying the beach after their arctic training. Hawk conducts a briefing and indicate plans for defending the space shuttle with a two pronged perimeter defense with an interior (tight perimeter) and exterior circle of defense. In addition, Flash and Breaker are going aboard, because hey, how hard can it be to fire up the space shuttle? To be honest, Flash is an electronics wizard, and Breaker is queasy about this. Perhaps this paved the way for the Joes choosing specialists like Countdown and Payload a few years down the line??

The Joes mock the slow speed of the gantry platform holding the shuttle. But they are getting into position for a launch. At a hefty 1 mile per hour, they are making excellent time.

And then of course, Cobra attacks!! Stalker is flying recon with a jet pack. He gives a brief heads up to the other group of Joes by radioing Hawk and warning them that Cobra is coming with things they have never seen. 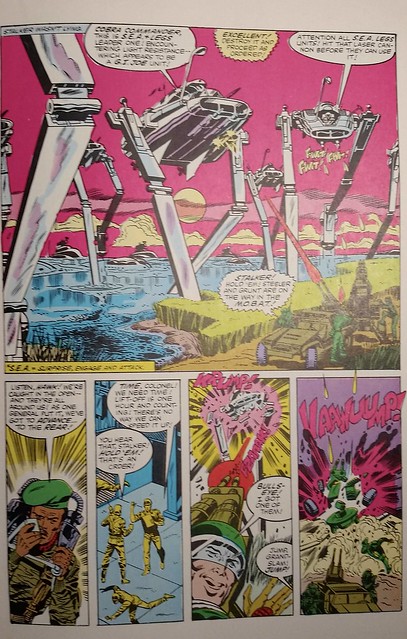 With what I would describe as long two-legged walking vehicles reminiscent of a cross between War of the Worlds and an AT-ST, Cobra assaults the Joes defenses. Grand-Slam is proud of himself for approximately 3 seconds after destroying one walker with his Heavy Artillery Laser (H.A.L.). But moments later has to jump clear and heads to join Clutch in the V.A.M.P. as they speed away, dodging Cobra fire. If you take another look at the cover, you will see another view of these unusual Cobra vehicles. Initially, I thought this was an air vehicle, but upon further examination, the jointed legs appear on either side of the elevated body of this vehicle, where the pilot (err…driver?) sits. At any rate, they seem formidable to the Joes during the initial few panels of the assault.

They are described as S.E.A. Legs. (Surprise, Engage, and Attack). And in this case, all 3 come true.

There are also tank-like treaded vehicle emerging from the ocean, as well as helicopter air support. Cobra is “all in” on this mission.

Clutch and Grand Slam merge up with Steeler and other at the M.O.B.A.T. which takes out another S.E.A. Legs vehicle. Stalker takes one out with a grenade from above. Rock ‘N Roll arrives and uses the RAM motorcycle to Gatling gun another one. So a lot of vehicles and Joes got to show off advantages. Of course this might have been designed to sell a few more toys, and there’s nothing wrong with that.

It does make me wonder if we were on track to get a giant R.T.V. for the Joes or any of these S.E.A. Legs vehicles for Cobra. Feel free to share your comments/replies on that question below.

Cobra’s amphibious tanks take a beating next. In a grisly panel, one tank gunner believes he has the shuttle in range. Alas, he radios the Commander to talk about it, allowing Snake-Eyes a moment to jump behind him, and well, do what Snake-Eyes does. Let’s just say the sound effect “SKROOSH!” does not bode well for the Cobra gunner as Snake-Eyes brings his knife down. 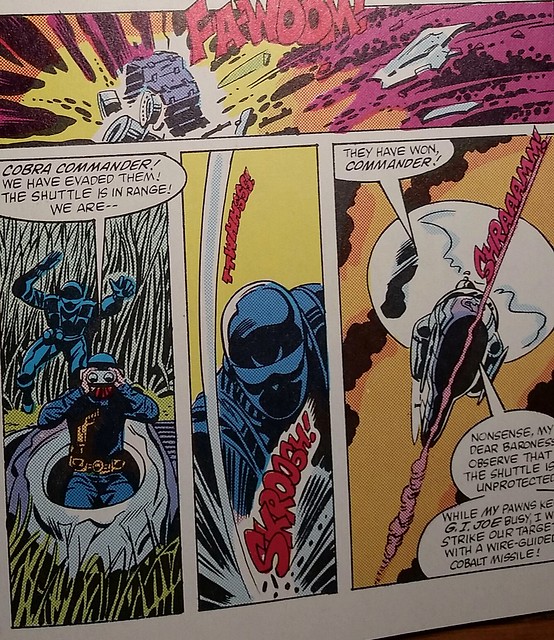 Cobra Commander launches a missile from his helicopter as the shuttle is about to lift-off. Hawk shoots the missile down and dives under a blast shield at the last minute to keep from being incinerated by the missile debris, the shuttle take-off, or both.

Cobra and the Joes continue to fight with bizarre weaponry, including launching a missile from their undersea base to try to intercept the shuttle. To break the earth’s gravity, the shuttle used to travel about 24,000 miles per hour. I would assume this orbital missile would need similar speed to intercept. Flash exiting the shuttle with some type of modified jet pack and catching up to it is nothing short of amazing. The math involved!? And he just did it! He steered the orbital missile off course and got out of the way before it blew. 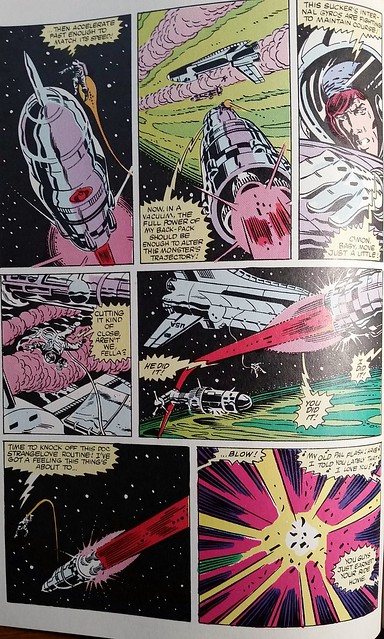 Meanwhile, back in Florida, the Joes are engaged with the Cobra forces. Short-Fuse even gets an appearance to hit Cobra with his mortar. The Joes stop Cobra, and the defeated Cobras indicate they won’t abandon ship. The Joes then pursue the Commander, think they get him, but then he gets away. 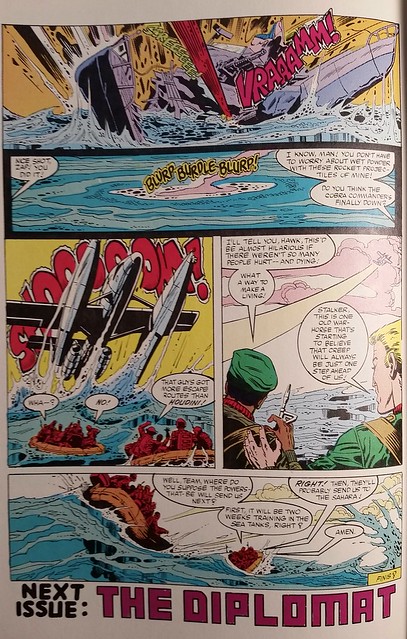 To be honest, I didn’t like this issue as much as the previous ones. It did further develop some of the characters. But the plot was a bit convoluted, and the money and planning involved by Cobra was over the top. The fact that the core Joes defeated them after what would have been years of planning and building seems somewhat convenient, even for our legendary heroes. Add to that, Cobra Commander and the Baroness slipping away, again. This is about the only detail that keeps the main story-line going further.

Overall, it is a good stand-alone issue, just not great. It does feature nearly every Joe and a lot of the vehicles. So it would help if you needed some assistance with your imagination for play-time as a kid. I acquired this issue later on when filling holes in my collection, and I can’t say missing this issue originally impacted me negatively in the overall story-arc. But a nice, solid, action-packed issue that stands by itself.

And it furthers the recurring theme of 1) Cobra attacks, 2) the Joes stop them, but 3) the Commander escapes.

Now You Know…a little more about Operation Code-Name: Sea-Strike! Next week will be Issue 9, The Diplomat. Feel free to leave a comment or give your thoughts AFTER THE JUMP.