Major characters (and minor recurring characters) perished in Issue 19.
Issue 20 was written by a completely different author and featured a stand-alone story.
Issue 21 was the iconic Silent Interlude comic, whose story was told in pictures.
This issue will bring us back to the main story plot-line.

The cover shows Destro literally playing with toys!! He has a plane and he is strafing Joe figures. Okay, product placement is strong with this one.

On the title page we see the Chaplain’s Assistants returning to Fort Wadsworth (from a West coast trip) to see the devastation where the Motor Pool used to be. This was destroyed in the Cobra attack in Issue 19. The Joes tell the Assistants that the boilers blew up, the propane tanks blew up, and all the vehicles blew up in a chain reaction.

We also notice the title of the comic is “Like Chimney Sweepers Come to Dust…” I always thought this was a grammatical error, since the common usage for a person who services and cleans chimneys is a chimney “sweep” not a chimney “sweeper.”

But a little internet search helped me discover this was a reference in a Shakespeare poem “Fear No More.” Feel free to read it, or have it read to you by following the link. It is not talking about literally cleaning the chimney. It is a reference to mortality: we all eventually return to dust.

And Larry Hama will give us ceremonies for the big 3 who died in Issue 19: General Flagg, the Eskimo Kwinn, and Dr. Venom. (Scar-Face and the sundry other Cobras who died evidently didn’t make the cut, or there wasn’t enough remains left to bury). 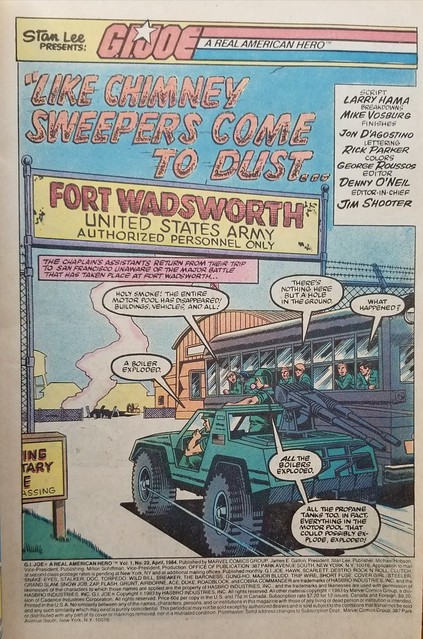 Clutch and Breaker pull up in the VAMP and begun talking with Scarlett and Hawk. Clutch comments on Scarlett not being the same since she and Snake-Eyes returned from wherever they went. (See issue 21.)

Scarlett delivers one of the best lines, of all time.

Scarlett: “You know what they say ‘Absence makes the heart grow fonder.’”
Clutch: “Really? If I had known you felt –“
Scarlett: “—In your case, I grew fonder of your absence.”
Breaker: “You walked right into that one, Clutch.” 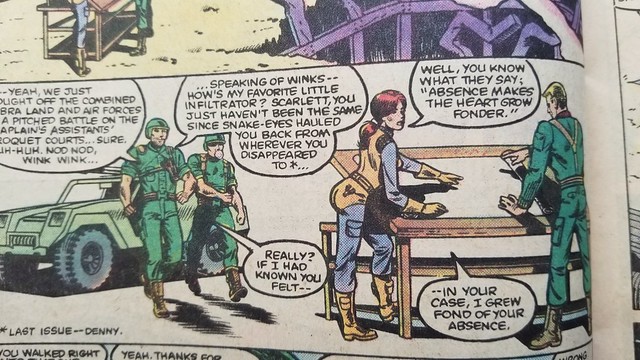 Underneath the ruins, the Joe team is working round the clock to re-build the Pit even better than it was before. And they are counting that Cobra believed they destroyed the base, so they have relief from pursuit for a while.

We will return to G.I. Joe after these messages –

Quick questions: Since there appears to be a neighborhood on the outskirts of Fort Wadsworth, was every single person away at work or kids at school during the Issue 19 attack? Did no one ask any questions about the massive smoke, the burning fires, the vehicle debris, and the faint hints of toasted Cobra troopers?

Nobody? Okay, I guess that was just me wondering…

A near collapse is averted when Gung-Ho uses his hand and arm to hammer in a brace to a support beam.

Over in the mess hall. Snow Job flirts with Cover Girl while they are putting dishes away in the kitchen. He tells her he is all for equality and women’s liberation. But he follows up with “Why should the guy have to pay for everything on a date?” Ouch. 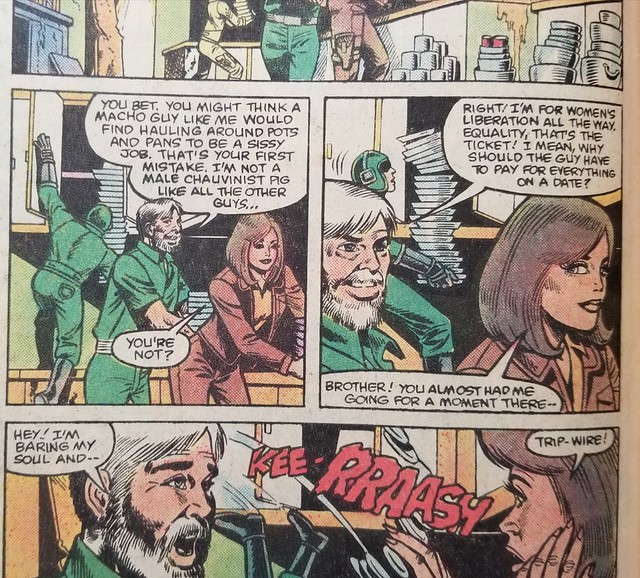 We’ll leave Snow Job’s rhetorical question for anyone who wants to do accounting and math problems.

Airborne gets out of the Dragonfly helicopter and Wild Bill greets Snake-Eyes. Airborne gives words to what they plan to do, since Snake-Eyes can’t. The body of Kwinn is wrapped up in a kayak and strapped to the landing gear of the Dragonfly. They plan to give him a proper Eskimo/Native Aleutian send off. 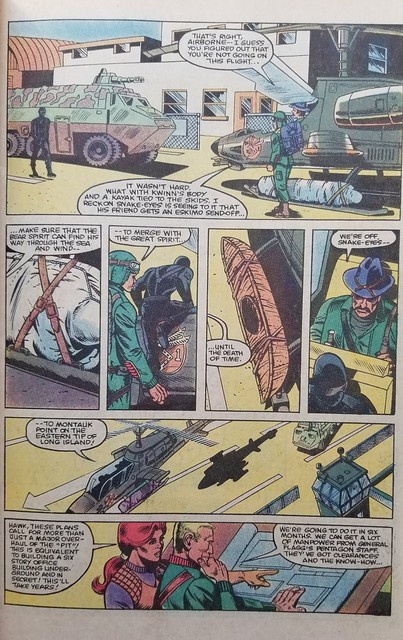 There are several scenes with reconstruction and even a cool cutaway diagram of what the Pit looks like under the surface. This picture is reminiscent of Issue 1, where we almost get a comic blueprint of the Pit. 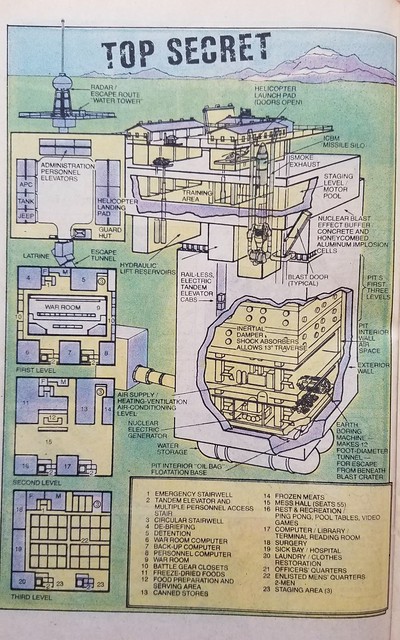 The thing I found most concerning was that the new/refurbished Pit had a silo for an inter-continental ballistic missile (ICBM). These are generally used for nuclear weapons. Pretty heavy for a kid’s comic.

Back at Cobra HQ, Destro interrupts Cobra Commander’s gun range fantasy-land where Joes stand perfectly still within 25 ft so he can shoot them. He is asking why the new proto-type anti-tank warplane is being prepared for take-off?

Cobra Commander has a special mission for it, but Destro feels put off that he was not consulted. The fighter will eventually become known as the Rattler.

In Switzerland, we see Major Bludd and the near mummified Baroness. She is clearly in pain and still confined to a wheelchair from her massive burns. Thankfully for Major Bludd, the concussion she sustained also wiped out the memory she had of him running away and leaving her to die in the explosion. She crashed her HISS tank into a row of parked cars (back in issue 16). Gas was everywhere, and Major Bludd fled while she called for him to help her. Such a gentleman.

But now he is working on paying for her reconstructive surgery at a discreet clinic. Dr. Hundtkinder thinks he can make her look good again. 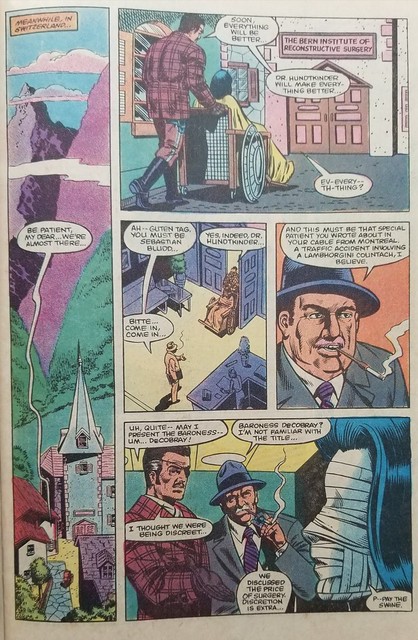 Off the Eastern seaboard, Snake-Eyes and Wild Bill put Kwinn to rest by sending his remains wrapped in a kayak out to the ocean. Wild Bill gives the voice to this reverent ceremony. Truly there would never be another like Kwinn. 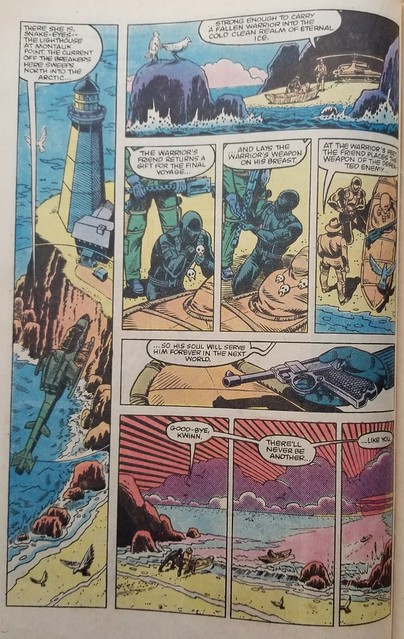 The scene changes to the next day, in Arlington National Cemetery, where many members of the military have been laid to rest.
More wordless panels provide the moments of silence for General Lawrence Flagg, who died in Issue 19. His casket is draped in an American flag, and pulled on a wagon by some horses. A rider-less horse follows close behind, symbolizing that its rider has now ascended to eternity. 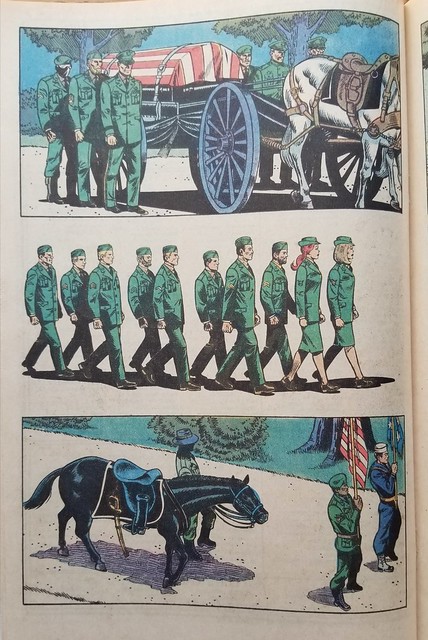 There is no dialogue until the 3rd page, when Clutch whispers to Cover Girl to stop fidgeting and being disrespectful. (They are supposed to be at attention.)

She points out that an incoming plane is flying too low.

It is the Cobra ground support anti-tank warplane Destro was referencing before.

The plane is going to launch missiles and bombs and wipe out the rest of the Joes right at the funeral!! 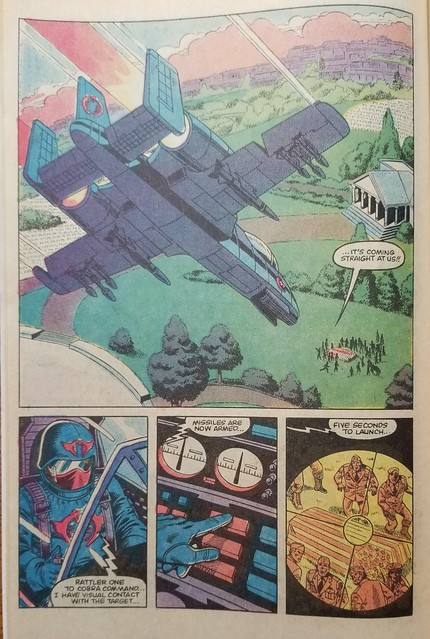 Larry Hama was very respectful of the American flag. He has Stalker grab the flag off General Flagg’s casket and said something like: “You’re not shooting holes in my flag.” In a later issue, a looter at an American embassy building is strongly discouraged from burning a flag. You might say his life depended on it.

At any rate, in one of the most convenient arrivals of ALL time, new characters Roadblock and Duke arrive and shoot down the Rattler prototype with ground to air fire. 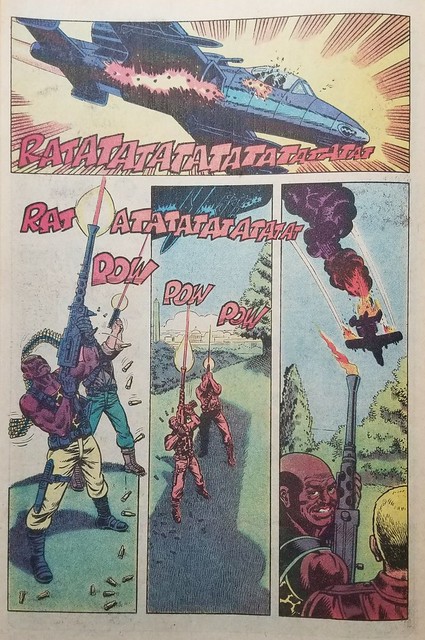 It seems like later versions of the Rattler had actual alloy armor, similar to the A-10 Warthog, upon which the Cobra plane is designed. This pre-Rattler proto-type was clearly made from a different material, perhaps only a composite resin. It disintegrated when it was shot up by Roadblock’s Browning M2 (“Ma Deuce”) .50 caliber heavy machine gun. It is patently ridiculous to give Duke and his .45 1911 pistol ANY credit for this. But it was a really fun scene. 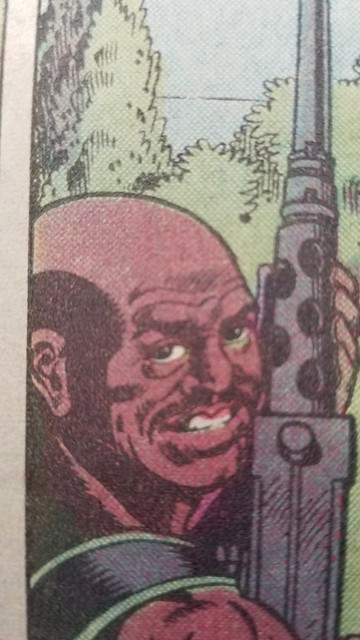 In fact, I will invoke the spirit of cartoon Roadblock for this panel:

“With teeth that gleam, I join the Joe team!”

I tried to resist the obvious middle school joke available here. But I can’t.

Okay, that was terrible.

In a nearby Potter’s Field, inmates on work release are burying the dead. One ponders why a doctor would be buried in a mass plot with other poor people. We see it is Dr. Venom’s name on a plain pine box. And Larry Hama book ends the issue with another Shakespeare reference to close it out. This time a Hamlet instance.

The tease for Issue 23 is that Cobra Commander will be captured! 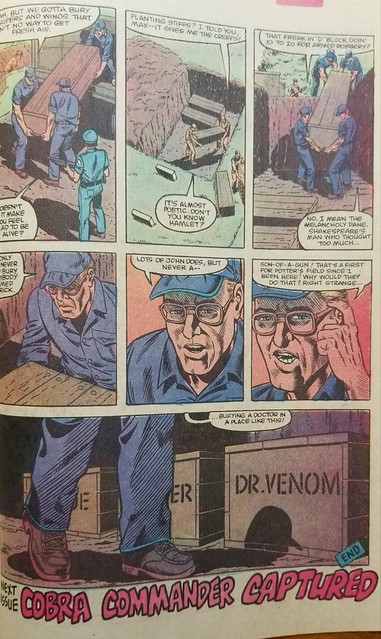 Okay, so this issue had some cheesy, but humorous dialogue. It also had some heart-felt and poignant words for the fallen.

On the cover we saw Destro playing with vehicles and action figures, (errrrr, his custom G.I. Joe Chess board pieces). This issue also introduced Duke and Roadblock. And we got another glimpse of the Baroness on her road to recovery.

There is also the heavier theme that all people are mortal. We all eventually die. As with the title, we are all dust. Even Joes and Cobras. Unlike the cartoon, people actually fell in battle in the comic book series.

Now You Know – a little more about “Like Chimney Sweepers Come to Dust…” Feel free to let me know what you thought of this issue AFTER THE JUMP.