Issue 2: Panic at the North Pole

“Back in the day,” I originally enjoyed the Sunbow Cartoon and began contemplating which would be the best figures and vehicles to work toward with limited resources. I earned chore money of 25 or 50 cents at a time (or maybe at a month). So it took a while to make the 2 to 3 bucks needed for a figure.

I didn’t really collect comics at the time, but stumbled upon Issue #15 at a corner store in the middle of nowhere Michigan, while visiting my grandparents in the summer. After several reads, I knew I had to try to back track the old issues.
I found issue #1 in a giant stack about 10 to 12 inches high at a Target. Originally cover priced at $1.50, they were clearance for 75 cents. Jackpot!

Later, I was able to find a giant anthology with a yellow cover that had issues 3, 4, and 5 combined on high stock paper.

But issue #2 was elusive. 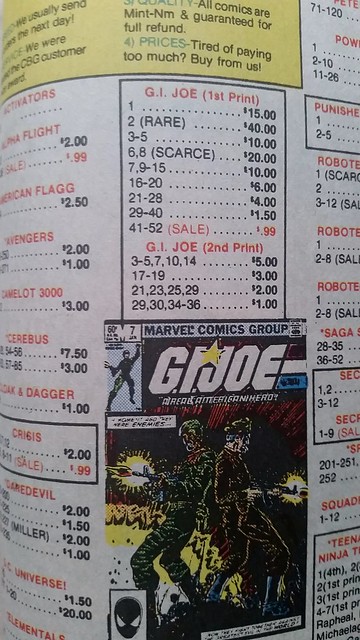 Secondary market prices, back in the day…

The second comic in the Marvel G.I. Joe series was rare, and the secondary market back then wanted several dollars for it. That would be a no go for a young person strapped for cash.
But then one day I was lucky enough to acquire a 3 pack of second printings of Marvel #2, 26, and 27 at Children’s Palace back some time in the 1980’s.

And that brings us to this review. 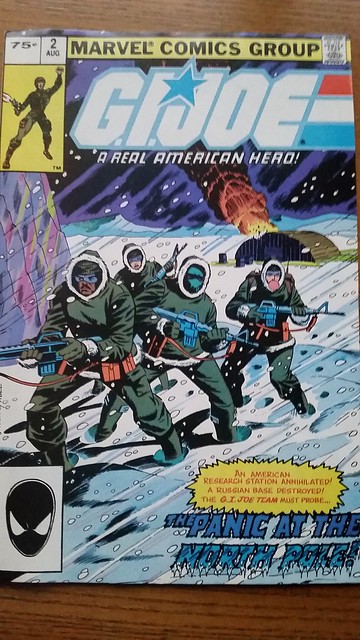 This issue began with an investigation at a small Research Base on the Polar ice cap. It appeared there had been a massacre, and all personnel had been wiped out. (Once again, fairly dark for a comic book.) 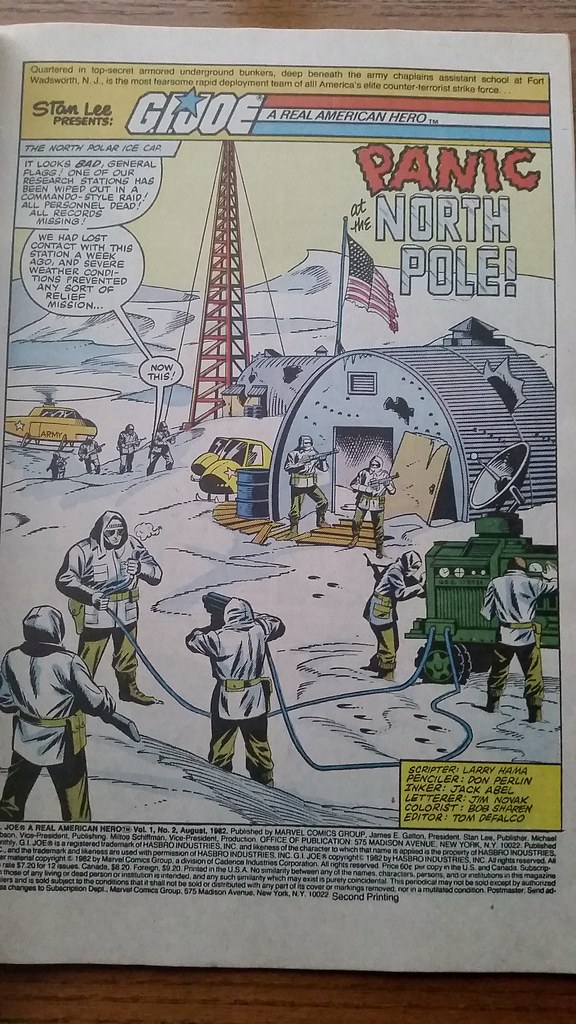 A sub-team of Joes was sent to check it out. Stalker, Scarlett, Snake-Eyes, and Breaker flew in a small plane and arrived through wintry weather. They were geared up for the arctic weather and continued to investigate. Note: General Flagg was in command at the time, and there is brief discussions with other “brass” or officers on the best course of action.

They found tracks that headed toward another Quonset hut that appeared to be a Russian/Soviet base of operations. Through observation, they noticed a rather large Eskimo near the entrance. 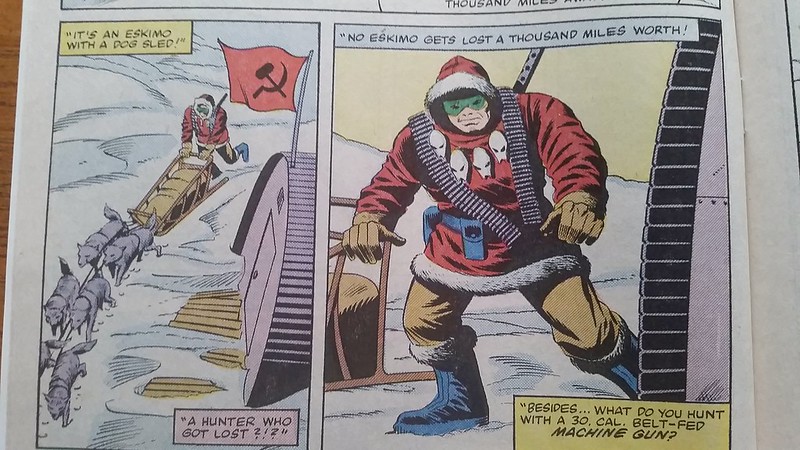 This would turn out to be a conflicted and multi-faceted character known as Kwinn. More on him later.

After he departed with his dogsled, The Joes carefully investigated the abandoned Russian facility. All the people here were dead as well, but they appeared to be frozen and dead from exposure. Snake-Eyes or Breaker were looking for clues and found a small bundle of explosives under a table! 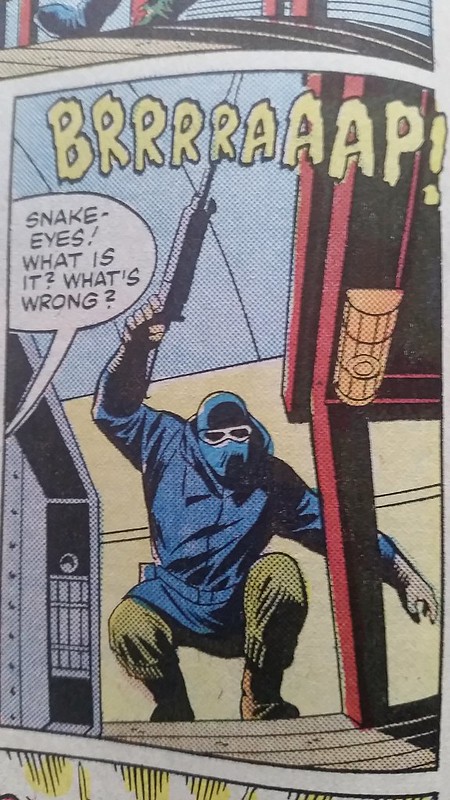 They barely made it out before the explosion! 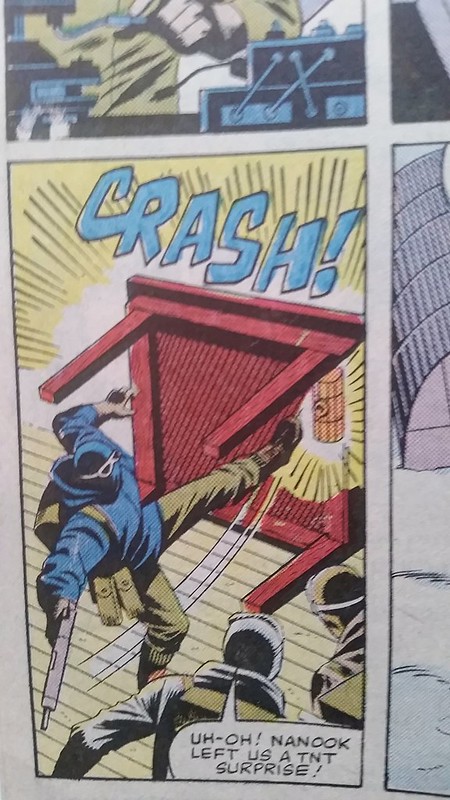 They had to find that Eskimo.

They caught up to him, but he got the better of them and disarmed them. With his .30 air cooled machine gun, he shot the guns out of the Joes’ hands, except for Snake-Eyes. His Uzi’s rack was all the way forward indicating an empty clip.
The man before them was an Eskimo mercenary named Kwinn, one of Larry Hama’s greater supporting characters. (As someone who started reading at issue 15, this was fantastic to hear the backstory of how Snake-Eyes and Kwinn had met, since I jumped in mid story, so to speak.) 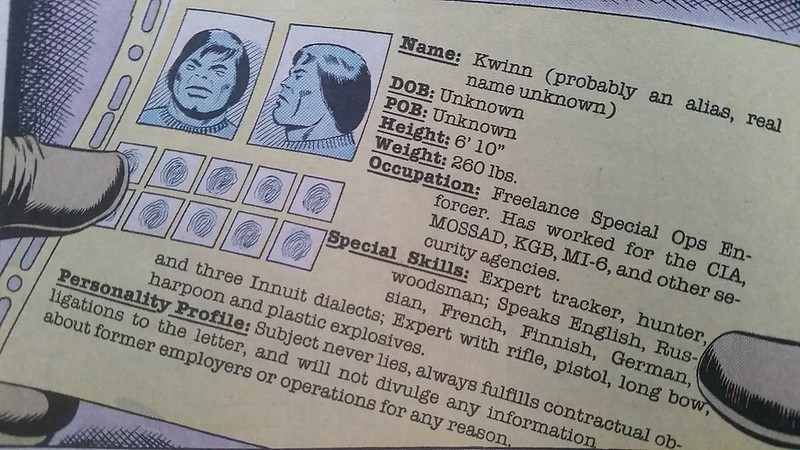 Kwinn was noble, though somewhat verbose. If he were not so awesome, he would have been tagged as “Chatty Kathy.”
From the bubbles, you can see a lot of monologue/dialogue. Perhaps Kwinn was a lonely fellow, and he felt the need to chat up new people. But this was a literary technique the revered author Larry Hama used to convey the story to us, without heavy lifting from an intrusive narrator.

He intended to honor his contract with the Soviets to the letter, which is admirable. But evidently the Russian underwriters who drafted the contract dropped the ball on that whole “Confidentiality” paragraph. Because Kwinn gave them a mouthful. And frame after frame he kept telling the story, and on and on he went. Then he left them and went on his way with the dogsled. 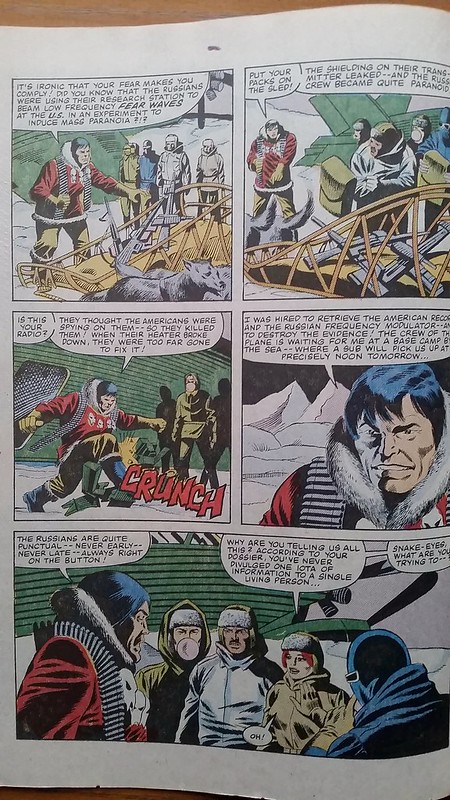 G.I.Joe #2 Kwinn is lonely, so he chats A LOT when he meets new people…

Somehow the Joes broke apart a bunch of pieces and made a makeshift vehicle and got ahead of Kwinn. I know, I know. The time/space continuum need not apply to movies and comic books. Suspend disbelief, and enjoy the story already!!

The Joes got the drop on him, but somehow he chuckled since he had removed the firing pins from their weapons at the last part, probably when the Joes dozed off to sleep during his marathon opening monologue. 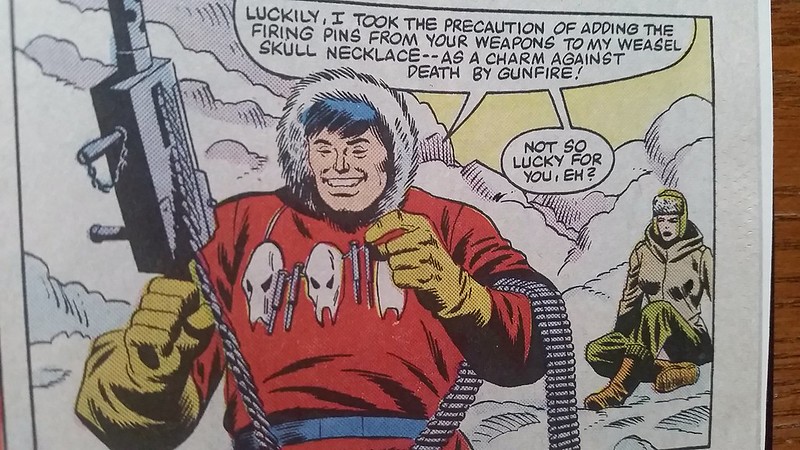 He had quite the swagger. His Eskimo parka kept him warm, but he accessorized with a Weasel-skull necklace. (No, PETA did not approve this comic.) Interspersed between the small, carnivorous mammal craniums, Kwinn had strung the Joes’ firing pins. He thought he was clever, but after arriving to the Russian spies to provide them the computer component, he was no longer wearing his mercenary bling chic neckwear.

He had left it as an offering to the spirits and let the Russians know they should get moving. Kwinn mentioned it wasn’t far for the Russians to make their getaway, and the Joes were much farther away. As the frames showed the Joes getting closer, Kwinn’s words indicated “…but they are trackers, and you are not.” Near the end, we see Snake-Eyes, Uzi in hand, wearing the weasel-skull necklace. The rest is implied. 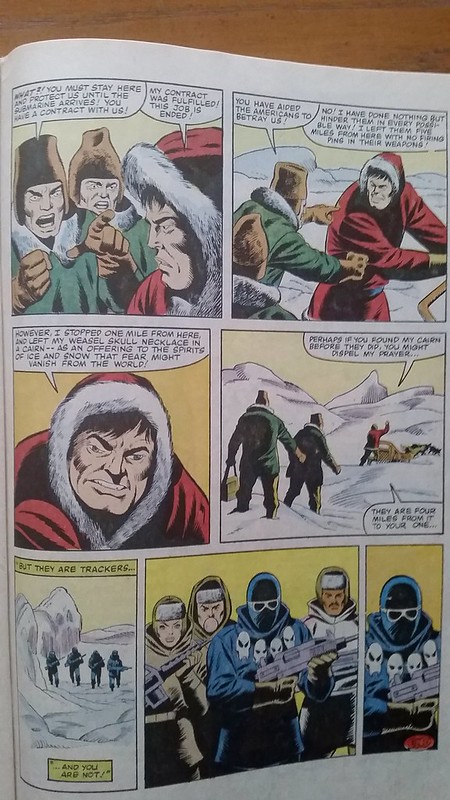 Overall, a very good issue, introducing Kwinn, a “frien-emy” merc who would make several more appearances. The story was definitely set in the 1980’s when tensions were high with the Russians. A story about paranoia radio waves would have seemed par for the course, as diplomacy with the Soviets was quite strained in that era.
[sarcasm]Not like today, when we get along fine with the Russians in an era of ongoing glasnost and joint good will.[/sarcasm]

Now You Know…a little more about Kwinn and the Panic at the North Pole!
-YorktownJoe

Join in the Conversation AFTER THE JUMP!