The 3rd issue of the original Marvel series features an updated parable of the Trojan Horse, this time with a giant Cobra battle robot. This is an interesting stand-alone issue that builds more character development and allows the reader more access into The PIT, the secret Joe base hidden underground beneath Fort Wadsworth, the fictional Chaplain’s Assistant Motor Pool post. 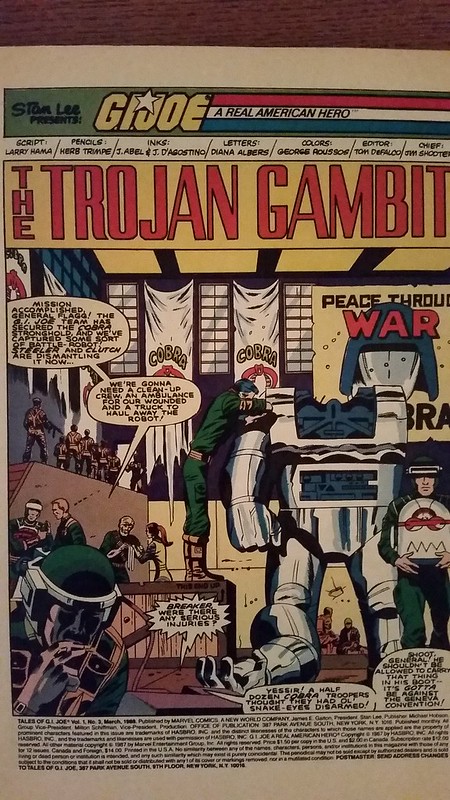 The story again implies that a battle has just transpired, and the Joes are cleaning up after themselves. Breaker is recounting the story in his report to General Flagg, the Joes OVERALL commanding officer at the time. (Hawk was a full bird Colonel (O-6) at this time, and served as the FIELD commander.) He requests an ambulance for the wounded. For the wounded Cobras that is. 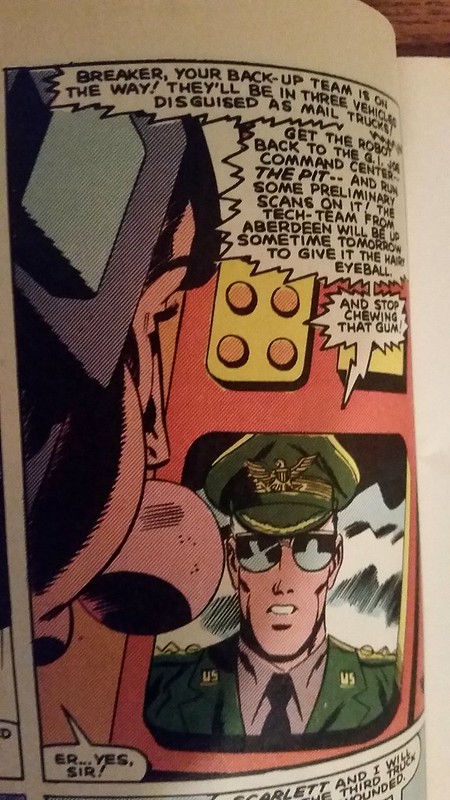 Although Breaker is the radio man, it appears he has better technology than existed at the time. Of course we can Skype or Face Time now, but back then it was landlines or walkie-talkies. So talking face to face via computer was really forward thinking on the part of Larry Hama. And I bet neither Apple nor Skype ever gave the man a nickel for his ideas….

The robot is dismantled and transported back to Fort Wadsworth, and some technical team is scheduled to come from Aberdeen the next day. Aberdeen is a reference to the Aberdeen Proving Ground, where the military tests experimental weapons systems. It is intimated that these technical folks are smarter than the Joes on the tech side. But the Joes get first dibs on the robot autopsy.

As they enter the motor pool, the reader gets to see a side view of The PIT. It is mentioned the lower levels could survive a minor nuclear attack, and graphically describes what would happen if the base were to be nuked. Again, pretty dark for a kid’s comic. So after 3 issues we should begin to see this is a comic written towards a teen and adult audience.

But about that autopsy. 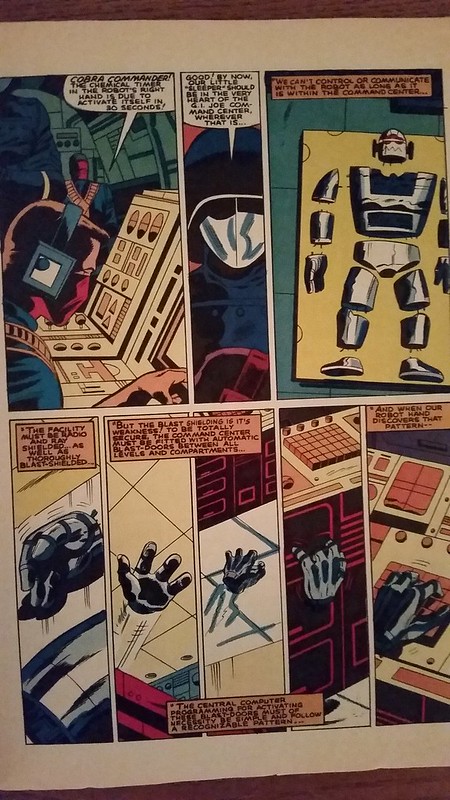 The Joes separate out all the parts, catalog and inspect for damage. The parts lay on a table and they leave for other activities. Hawk and Scarlett dress up and attend the Chaplain’s Assistant Tea event. Snake-Eyes, Stalker, and Flash head to the armory to put away weapons. Breaker, Steeler, and Clutch go to the vehicle level. 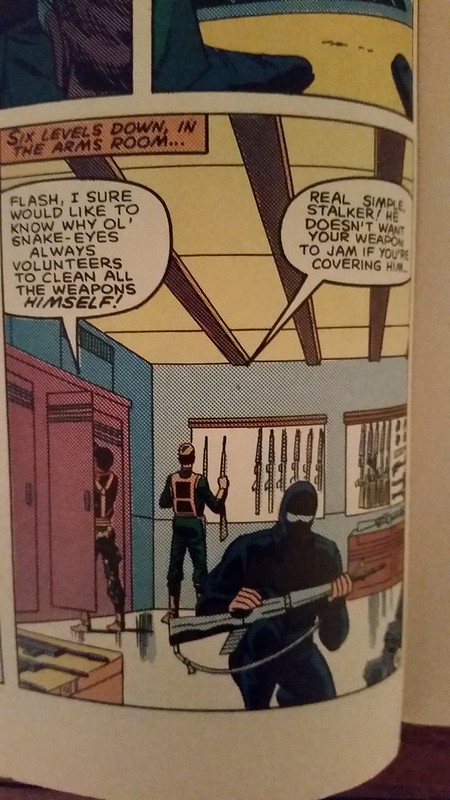 We find out Snake-Eyes volunteers to clean all the weapons: He doesn’t want yours to misfire, lockup or jam if YOU are covering HIM.

Meanwhile the robot is reassembling himself “by hand.” 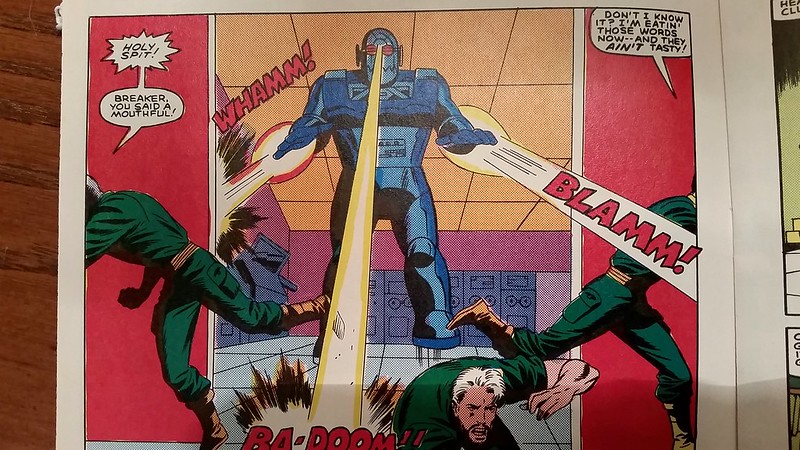 And now he starts shooting!!

Breaker utters the imprecation “Holy Spit!” This probably was okay, but just barely under the Comics Code back in that time. To be fair, they were under fire. 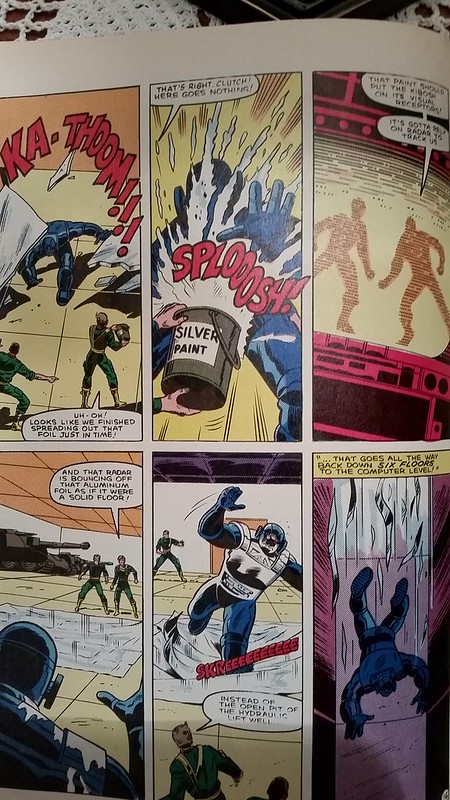 The Joes chase the robot around the PIT. It tries to seal them in so it can escape to the surface. We see glimpses of Cobra Commander with a fleet of attack helicopters trying to pinpoint the location of the Joes’ HQ, so they can destroy it. But the robot has to get to the surface to send a radio signal to the air assault teams.

The Joes try a variety of “Home Alone” worthy makeshift attacks on the robot. They douse it with after shave, then light it on fire.

It gets to water and extinguishes the flame.

They send vehicles through an elevator shaft at it. They even throw silver paint at it to scramble its sensors. They also spread tinfoil over an open vehicle lift elevator portal.

It lands very, very loudly. That should be the end of the robot, right? Wrong! 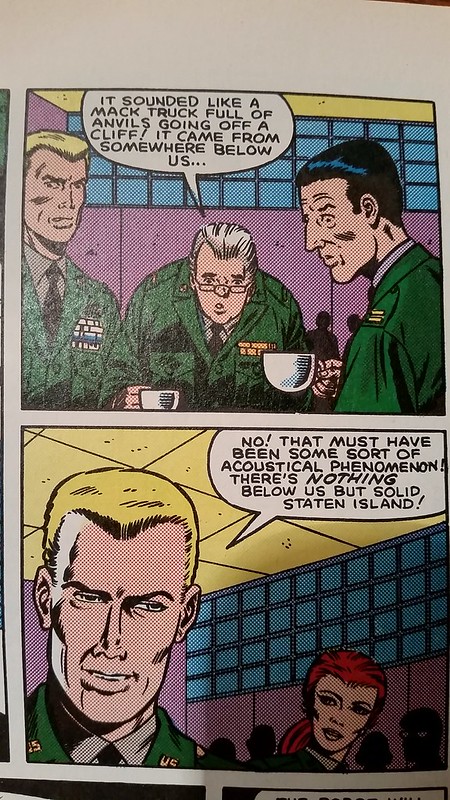 Hawk tries to convince the Chaplains that they are hearing things. He is a terrible liar.
The Chaplain utters the phrase that it sounded like a Mack Truck filled with anvils falling off a cliff. That is funny and sounds so true. Nice one, Reverend!

Although the Robot was smashed badly in the fall, the Head starts squirming around with tentacles. I must say, this is about as overt a HYDRA reference as could be slid by the editors. I mean, it had tentacles for crying out loud… 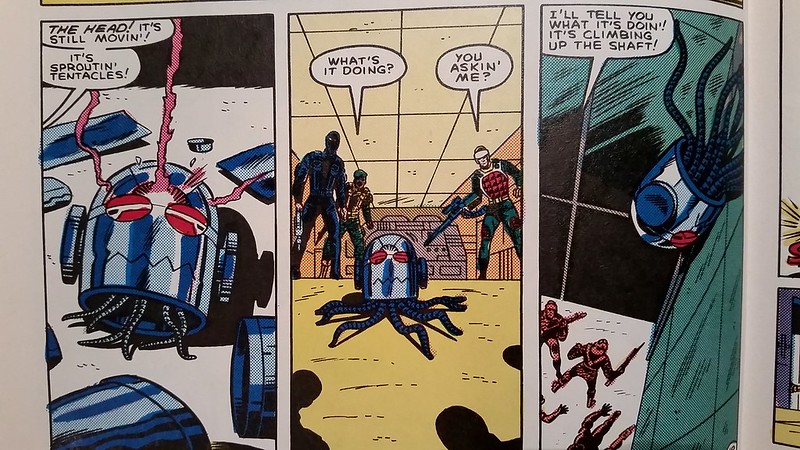 Although it tries to climb up the wall, Flash shoots it down with his laser. That should be the end of the robot, right? Wrong! Headshot with a Laser rifle? 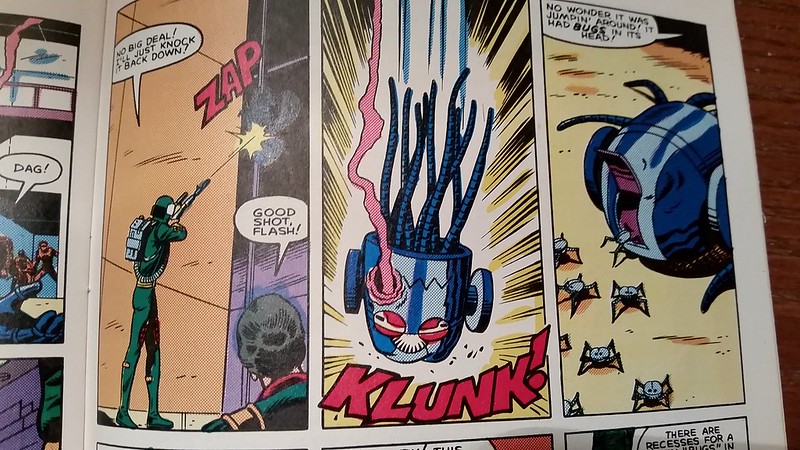 But we see the smoldering head with a melted hole in it, but little mini-bugs are crawling out of it. They are walking around. But those are not bugs!!

Those are mini-robots shaped liked bugs with radio frequency homing signals to signal the Cobra forces. 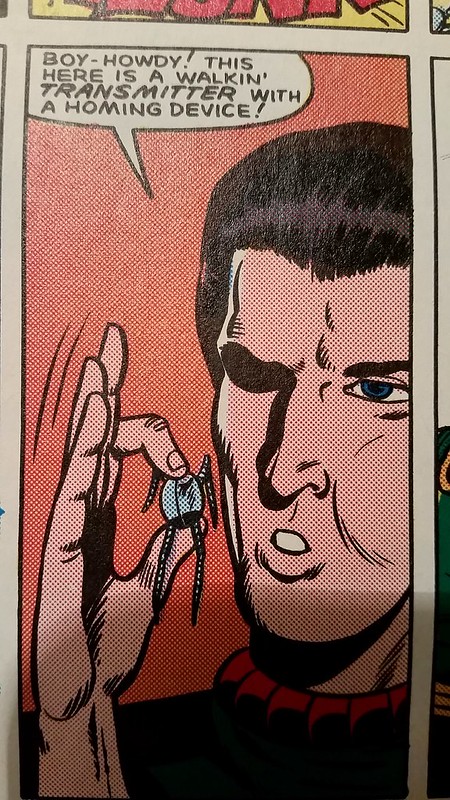 Breaker identifies the transmitter robot bugs and indicates there were 12, and the hunt is on. All are accounted for except one, crawling up to the surface of the Motor Pool where Hawk and Scarlett are enjoying tea with the Chaplains and Assistants. 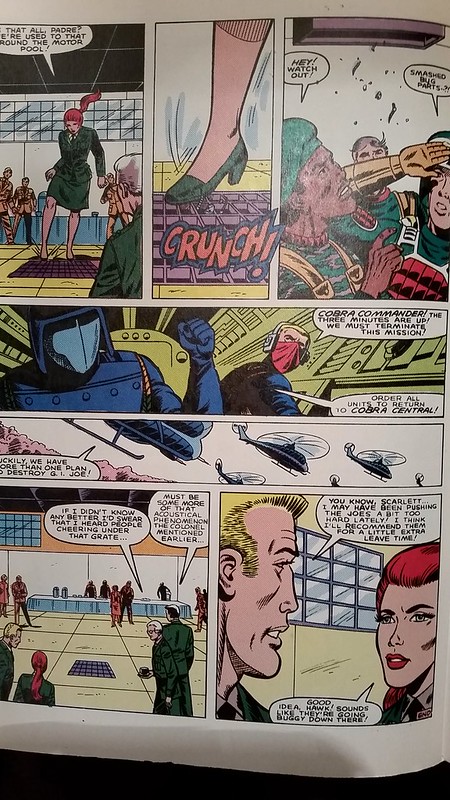 Scarlett stomps the last bug and the parts fall down to the Joes below and they cheer.

That should be the end of the robot, right? Right!

Scarlett makes a groan inducing joke about the Joes down below going a little buggy.

Overall, this was a good issue, and continued to introduce Cobra’s never ending exploration of advance battle robots. They made appearances here and in the Sunbow series first. Later came the various B.A.T.s. who caused the Joes extensive issues starting with issue 44.

Cobra also is transfixed on locating the Joes secret base. And the Joes are equally determined never to let them.

Now You Know a little more about The Trojan Gambit! Feel free to let me know what you think of this issue AFTER THE JUMP!