The Cobra courier Scar-Face was captured by the Joes in Issue 18. Prior to his capture, Dr. Venom dosed him with a time-release plague toxin. Seemingly, the goal is to kill the Joes within their own HQ.

But Cobra and Destro are not patient enough to let the Joes die from disease. They are looking for the Joes to go into plague quarantine protocols. When they notice where this is, they plan to mount an offensive and wipe out the sick Joes. No mention of rescuing Scar-Face.

Also in custody: Major Sebastien Bludd. The one-eyed poet mercenary was captured by the Joes. But not before inflicting significant damage to the treads of Grand-Slam’s boots and backs of his gloves.

One thing you will notice on the cover is the traditional “Green-shirt” in the corner box was replaced by a caricature of an assistant editor in charge. I’m happy for this person to get credit, I suppose. But it seemed odd at the time. And it didn’t really help the cover.

Also, the art in the cover became progressively less detail oriented as you progress deeper in the photo. By the time you get to Destro and his HISS tank, it is almost looks like the assistant editor decided to add in more action in the scene by drawing parts of it herself. Or perhaps hurrying the cover artist to completion to meet a deadline. It isn’t a bad cover, but it isn’t the upper echelon we had been receiving in the past few issues. 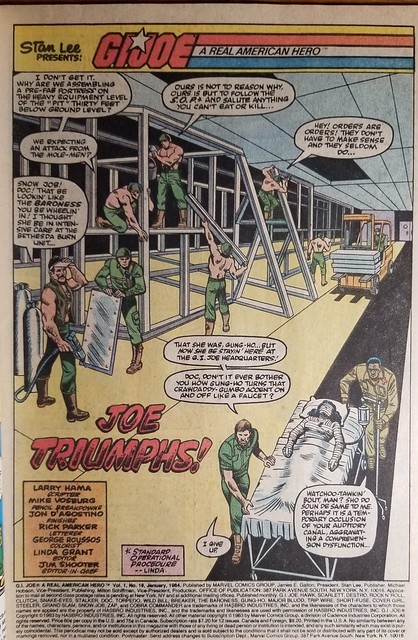 The issue begins with a lot of construction happening and the bandaged Baroness being brought in by stretcher. I’m not familiar with burn victim protocol, but I would assume that her hair would have been the first thing to burn off. (Unless she used some type of asbestos-based hair product.) I’m not trying to be uncaring, just pointing out she must have already been provided a wig, despite her state of being heavily sedated for pain and recovery. But in this issue it helps quickly identify the bandaged figure and discern her from a mummy found in an archaeological dig. 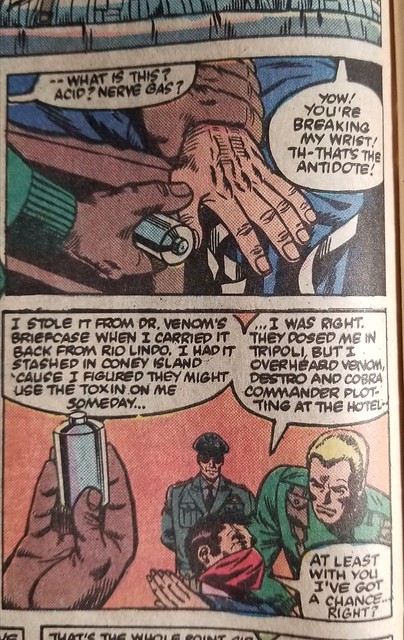 Meanwhile, Scar-Face is trying to dig in his boot for a vial of something while the Joes discuss what to do next. Scar-Face mentions it is the antidote for whatever Dr. Venom dosed him with. I assume if a mad scientist had given me the plague, I would want the antidote. But I would have not only swiped the antidote if it was available. I would have taken the antidote, not swiping it and storing it in my boot where it might have been damaged and lost. I figure Scar-Face took the antidote, but brought it along in case he needed to take more. 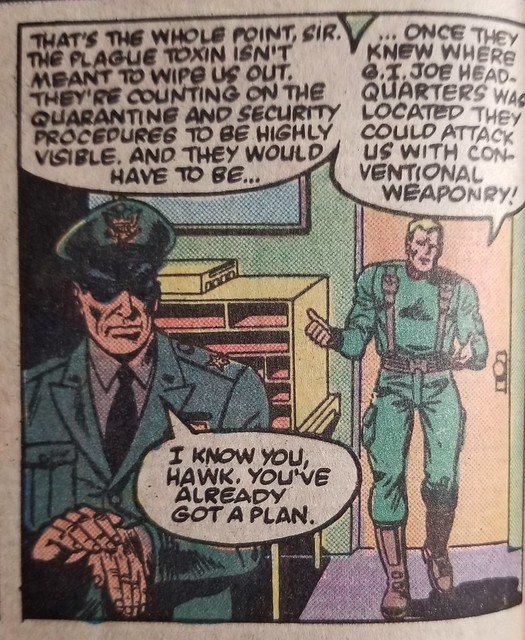 Hawk and General Flagg discuss that Cobra will be watching for very visible quarantine procedures, so they can attack Joe Headquarters. And they have a plan to throw Cobra off the trail. 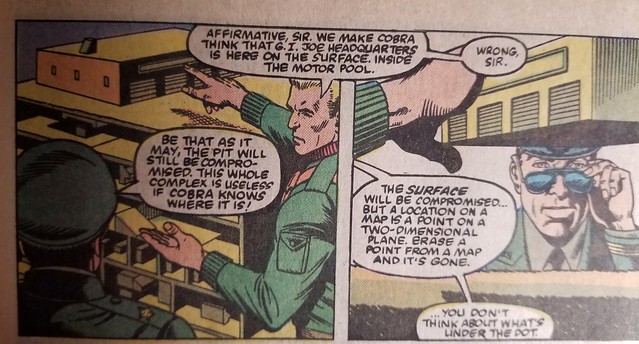 The Joes are constructing a surface base to hide in the Motor Pool at Fort Wadsworth. That way when Cobra Attacks, they can fight back. And when the surface base is destroyed, the secret of their true underground base, the PIT, will be preserved.
This helps the story along, as well as selling some G.I. Joe HQ toy playsets for Hasbro. 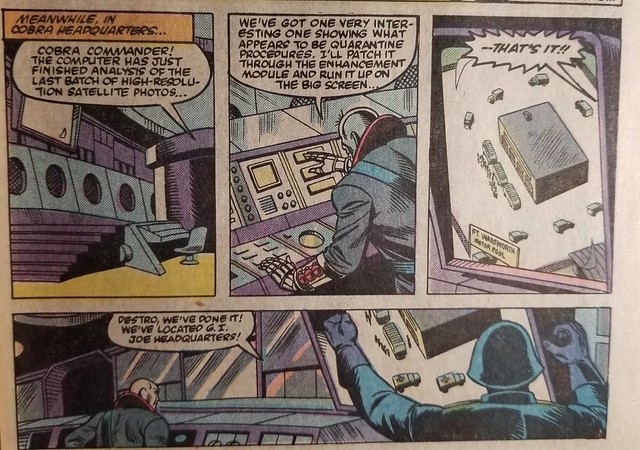 Cobra Commander and Destro spot the ambulances converging on Fort Wadsworth. Destro is developing the Chromecast or Apple TV prototype to cast the image to their big screen. Once again, Larry Hama shows himself a futurist in technology. Their plans seem to be working, and the Joes are falling into their trap. Or so they think.
—
Elsewhere, Kwinn and Snake-Eyes converge on Dr. Venom’s lab near the old Brooklyn Navy yard. Though the pursuit has been long, it is nearing its finish. 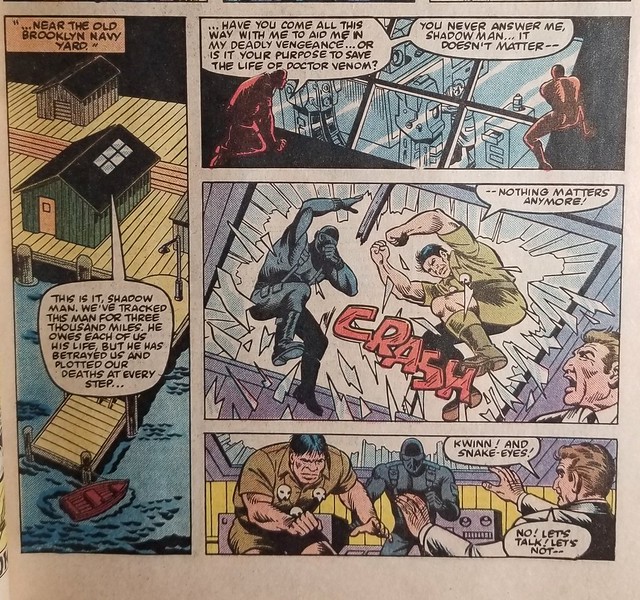 It looks like Dr. Venom is going to be captured, read his Miranda rights, and given legal representation so that he can present a defense in a court of law accorded to him by due process under the Constitution. Heh, heh, heh!

Kwinn’s revenge is being interrupted by Cobra forces arriving at Dr. Venom’s lab. Timing is ruining his vengeance.

Snake-Eyes notices some S.N.A.K.E. battle armor exo-suits and starts putting them on. I’m not sure if he has been reading Cobra’s version of Popular Mechanics magazine, or if he figured armor might be better than having Cobra bullets riddling his body. At any rate, he starts putting on one of the suits. 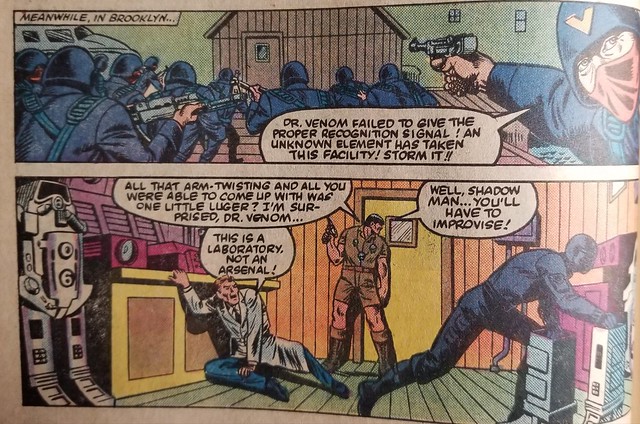 At the Joe’s secret underground base, the PIT—

The Joes have completed construction of an armored fortress that they are raising to the surface of the Motor Pool building. They are using the hydraulic lifts (like vehicle elevators) to raise it into place.

Just outside, Clutch and Breaker are speeding toward the Motor Pool with Cobra air support in hot pursuit. They have Scar-Face and Major Bludd blindfolded and handcuffed to the back of the VAMP.

It looks like it is going to be close. 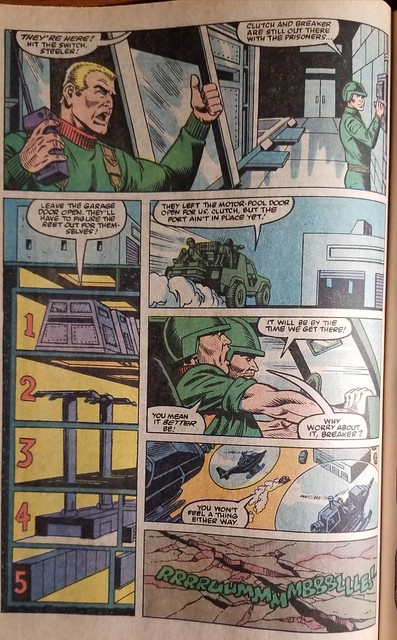 Major Bludd and Scar-Face are moved near the Baroness in a prison cell where Doc is watching over her. They make some jokes about Doc being a coward and he delivers the classic line “I’ve been called a whole lot worse by a lot better.” Instead of striking back next time somebody verbally picks on you, deliver that line instead. So satisfying.

It turns out that the S.N.A.K.E. armor also has some remote controls as it is designed for both manned and unmanned use. (The toy came with a rubbery template that could hold all the parts together if you didn’t want to store a figure in there.) At any rate, Dr. Venom indicated it has mind controls, which is not really even needed. The remote controls to over-ride the wearer’s control would be sufficient.
After Snake-Eyes and Kwinn were captured, Kwinn was also put in a suit an brought along for the attack on the PIT. What could possibly go wrong??
—
Snake-Eyes overcomes the mind controls and takes back control of the suit through strength of will. Because, of course he does.
He shoots at Kwinn’s suit to break it aparts. Once Kwinn is free he picks up a PAC Rat (Another small Joe toy) and blasts Dr. Venom’s HISS tank driver. 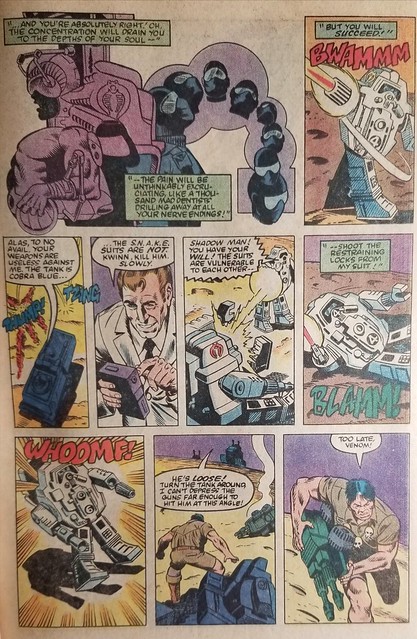 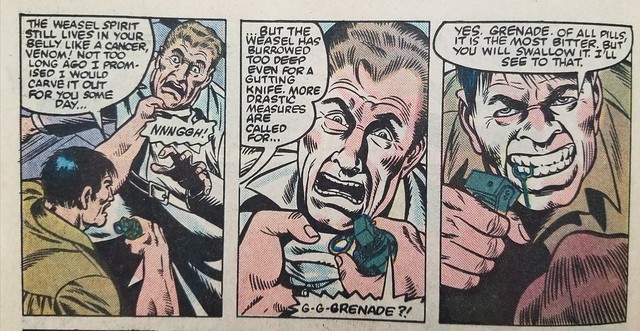 “Yes. Grenade. Of all pills, it is the most bitter. But you will swallow it. I’ll see to that.” – Kwinn

Proposed drug commercial:
Are you a mad scientist working for an evil terrorist organization? Have you betrayed both friends and foes alike? Do you kill randomly because you are a homicidal maniac? Ask YOUR doctor if “Grenade” is right for you! “Grenade” has been proven 100% successful in clinical trials for curing mental illness in violent criminals. Possible side effects include explosions, pulpy dismemberment, and certain death. But all patients who have used “Grenade” have experienced 100% improvement in symptoms of homicidal manic illness. Available in a difficult to swallow baseball sized tablet with an easy to activate 5 second delay.

It looks like Dr. Venom has asked for a free sample.

Kwinn has already pulled the pin on the grenade.
—
But Kwinn calms down and speaks about defeating the Weasel spirit within oneself before trying to cure others. He decides to let Dr. Venom live and finds a moment of peace on the battlefield. 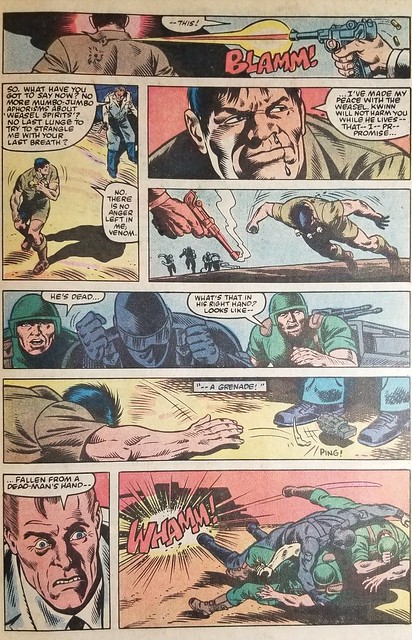 Dr. Venom shoots Kwinn in the back. He mocks Kwinn’s integrity and moral superiority. He even goads Kwinn to trying make an attempt to kill him with his last breath.

Kwinn promises not to harm while he lives. Which looks to be less than 30 seconds away.

As he drops dead, the grenade falls from his hand. The spoon flips, and eternity catches up with Dr. Venom.
—
We don’t really get a pause to mourn the passing of these two major characters.

In the commotion of the battle, a Cobra F.A.N.G. lands. The Cobras aboard land and plant a time bomb.

Doc wonders what is going on and Major Bludd knocks him down, still handcuffed. General Flagg appears and points his .45 at them. He tells them they are staying on as prisoners. Scar-Face kicks the gun from Flagg’s hands. Bludd gets hold of it and shoots General Flagg! 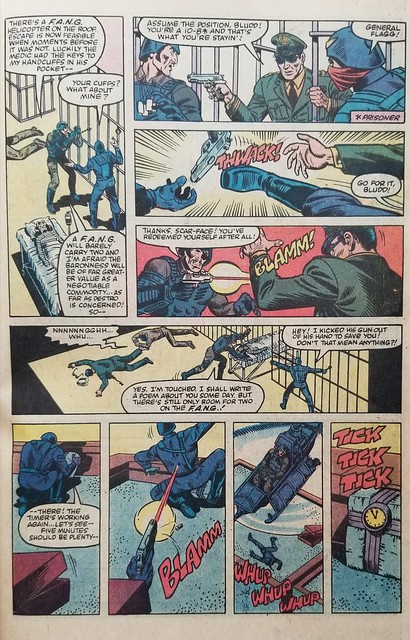 Bludd thanks Scar-Face as he exits pushing the Baroness in her stretcher. He doesn’t kill him, but he takes the handcuff keys with him.
Doc tries to save General Flagg, but Scar-Face is stuck handcuffed to the cell. 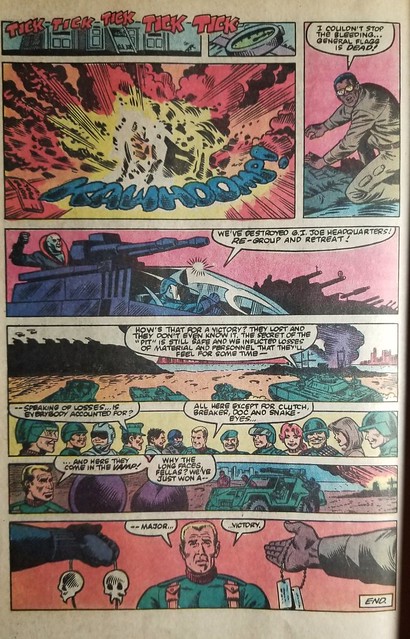 The time bomb explodes. Doc announces he could not stop the bleeding to save General Flagg. Cobra retreats, celebrating their destruction of Joe HQ. Hawk doesn’t know about the casualties and comments on winning a major victory. His excitement is immediately subdued upon seeing weasel-skull necklace from Kwinn and the dog tags from General Flagg.

This issue had a lot of action. And death. Lots of death.

And Major Bludd shot the F.A.N.G. crew because there was not room for all of them on the F.A.N.G.

I have mixed feelings about it, but overall it was a good issue. The cover was only average. The death of Kwinn and Dr. Venom was intertwined in an intriguing way.

In addition to leaving us with a jarring conclusion, there is a “Classified File” with a short filecard write-up on Snake-Eyes. He is pictured in action during a war game scenario with other military personnel. He is clearly seen subduing one. The dossier provides information on Snake-Eyes, similar to what would be found on a file-card on the back of a carded figure. It is a nice addition to the issue. 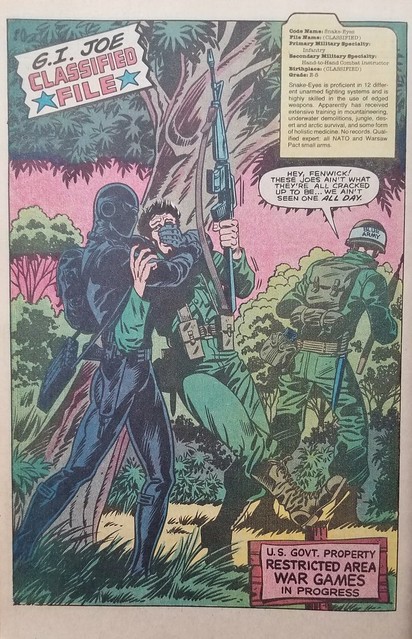 Now You Know – a little more about “Joe Triumphs!” -YorktownJoe

MAKE THE JUMP to the forum and join in the conversation!