In the previous issue, major and important side characters on both sides died. This issue does not address this in any way. It is as if this issue was not part of the main story line at all. More about that in a moment. Clutch was the first Joe I ever owned in the 3 ¾ line. I didn’t own this comic until much later, and was given a copy by a friend who had ruined his after reading it several times. (I might re-take some of the pictures if I acquire a better version of this issue in the future.

The cover is rather dramatic as we see Lance Steinburg (Code-name: Clutch) falling from the sky. Normally we see Clutch driving, as that is the special skill that drew him to the Joe team. In fact, Clutch is associated with 2 of these 3 main things:

1) Driver of the VAMP jeep-like vehicle.
2) His lifetime of defending feminist ideals.
3) Growing up in Asbury Park, New Jersey.

If you have any familiarity with G.I. Joe, you know which two it is.

That being said, we don’t often see him flying or falling from the sky without a chute.

Inside the cover we see Clutch leading a charge with several other Joes following behind. A blue jet is firing on them, and they keep moving. Of note, the credits list Stephen Grant, not Larry Hama as the author. The artists were also new, but they did a fairly good job. 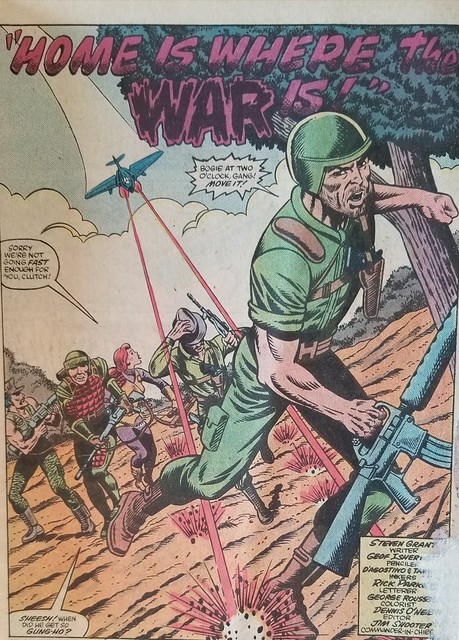 It turns out after several pages that this is just a training exercise and Hawk is timing them.

Clutch is excited to get a week of leave time and is headed back to Asbury Park, New Jersey to, well, we actually never find out. Presumably spending time with his family, but we never see any of them either. 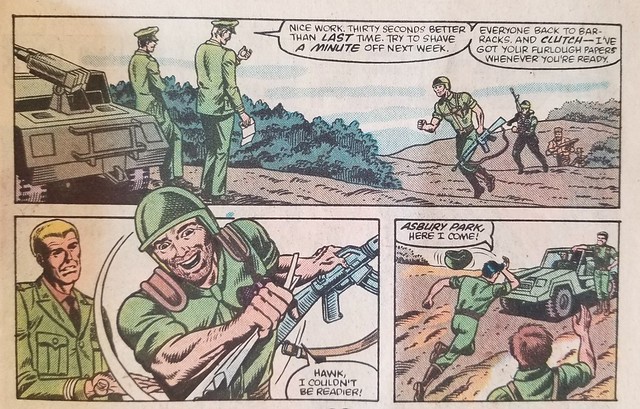 After he gets off the bus, he is nearly run over by an old high school friend in a fancy sports car. Billy Kline lets him know he started an automotive company. It is a little odd that he just happens to be driving where Clutch is walking and then he convinces Clutch to come see his work. 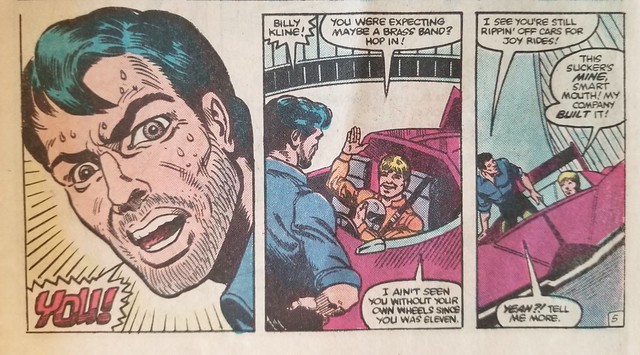 Of course the sign out front says Watash Automotive. If he built the company “Kline Automotive” would be the name out front. And I’m pretty sure if you are the owner or founder, the security guards aren’t going to hassle the boss. But they did hassle him. It was weird.
A few things seemed out of place. Clutch takes a shower and overhears Billy arguing with someone over the phone. Billy leaves and Clutch decides to snoop around a little. He stumbles on to a few Cobra troopers, fully clad in blue uniforms with helmets and red scarves. I’m pretty sure they wanted us to know this was Cobra. 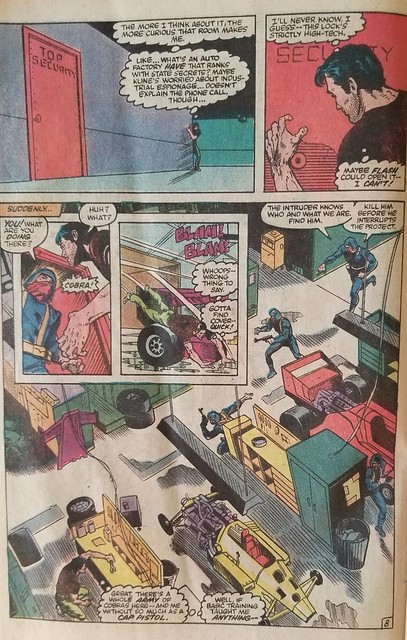 Clutch makes a run for it and finds a wrench in the garage. Cobra troopers chase him and are shooting at him. Clutch takes one down by beaning him with the wrench. He drops a car that was up on a lift on another two.

Clutch snags one of their 9MM Lugers and stumbles upon Billy Kline and several more Cobras. Clutch runs in and tells them all to freeze. Billy hits him from behind with a hammer. 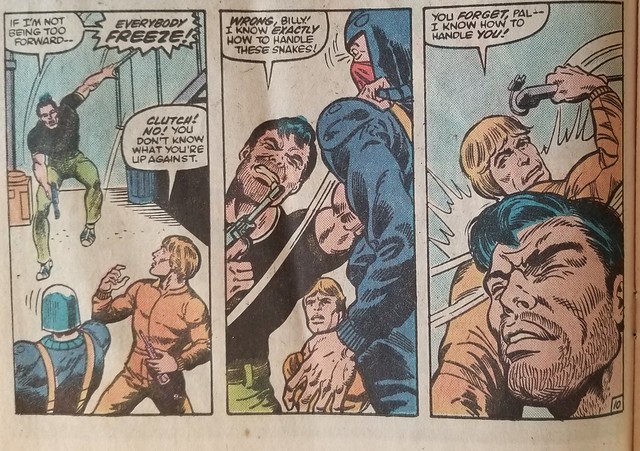 Then we see Clutch tied up in a terrible position that I think would dislocate most people’s shoulder and collar bones. Billy mentions that Cobra is holding his family and he hopes Clutch will understand. 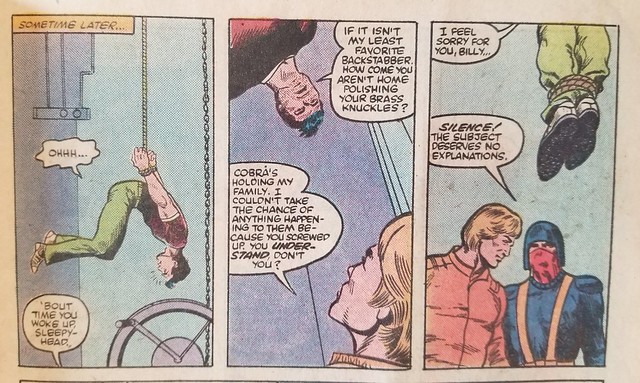 The Cobras decide to test a new experimental jet pack on Clutch. It actually looks like a belt and it is spelled jetpak throughout the issue. (I suppose there aren’t a lot of spelling contests in Cobra.) Since Hasbro was not selling anything like this, maybe it was designed to help kids who didn’t end up getting a JUMP jet pack. Hey kids! Just pretend your Joes and Cobras have experimental jet packs instead of belts and you can fly them around your room without buying any vehicles. Oh wait… that might not help business… Quick pull the plug and get Hama back on this project.

Billy slips him a knife and the Cobras fly Clutch around with a remote control, even though he is still bound with ropes. I’m not sure what this is supposed to test. Maybe whether he passes out, gets the worst wedgie of all time, or they are just messing around with him. We don’t really find that out either. 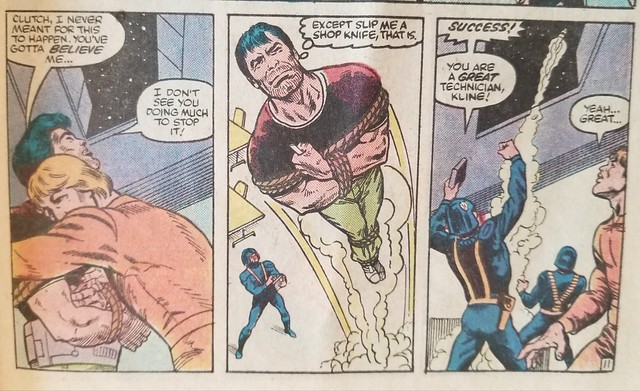 The Cobras enjoying flying him around, then turn the remote off to let Clutch fall to his death. Clutch finally cuts through the ropes and figures out how to manually fly the belt jet pack. He slows down, then disconnects the belt jetpak and falls in the creek or brook. 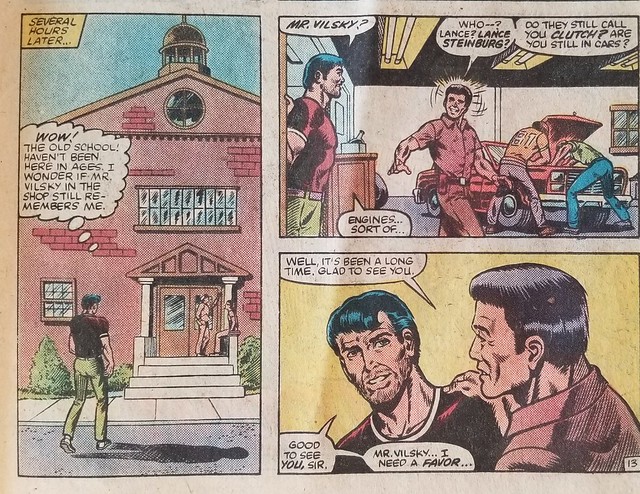 He walks dripping wet for several hours and ends up back at his old school. He finds his automotive teacher who is glad to see him. Somehow he talks the teacher into letting him go all A-Team on somebody’s car in the shop. A few hours later he is careening in an armored vehicle toward a house in town. He jumps out and let the car crash into the house, knocking it off its foundation. 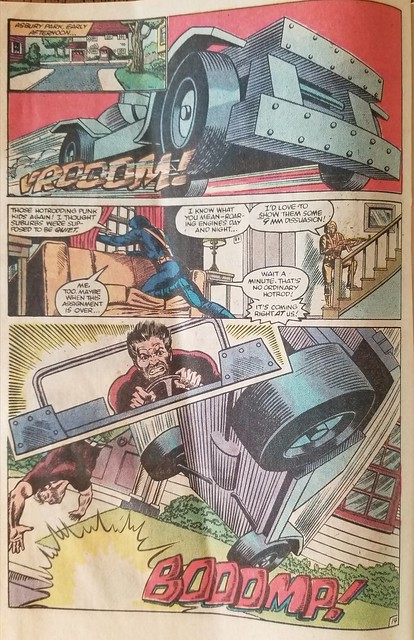 G.I. Joe will return after these messages — In a previous place I lived, some young people were drinking and driving. They ran through 3 stop sign intersections and crashed into a house 3 doors down from us. The car never slowed down and wedged itself in the kitchen and then dangled downward toward the basement. The house could not be repaired and our neighbors moved away. It was torn down and remains a vacant lot. All that just to say, it is possible to knock a house off the foundation with a car. However, it is not recommended. I found mention of it here. https://nixle.com/alert/4772636/

Now Back to G.I. Joe — Clutch recovers, bursts in the house and starts shooting Cobras. After shooting a few of them, he runs upstairs and finds Billy’s wife and daughter. He advises them to grab some things and get out. He calls the Joes. They are worried about raising too much of a ruckus when assaulting the Cobra weapons factory disguised as Watash Automotive. But evidently the devastation caused by having every cop in the city around the house with the car sticking in it wasn’t too much of a commotion. (At least that’s what happened in our town when the car hit the house.)

Okay. I may buy that Clutch was able to walk for hours from out in a brook somewhere to his old high school. I may even set aside how Clutch was able to go Mr. T and build an armor front to a car. And convince the automotive shop teacher to let me him take somebody’s car that was there for student repairs. But how did Clutch know where Billy and his wife lived? He didn’t know Billy was married and hadn’t seen him since high school. They had driven straight to his work. He literally could have lived anywhere in this city or a surrounding suburb. How did he find this out? And how did he know the wife and daughter wouldn’t be killed when he went kamikaze with the car into their house? This seems a little more than an oops. 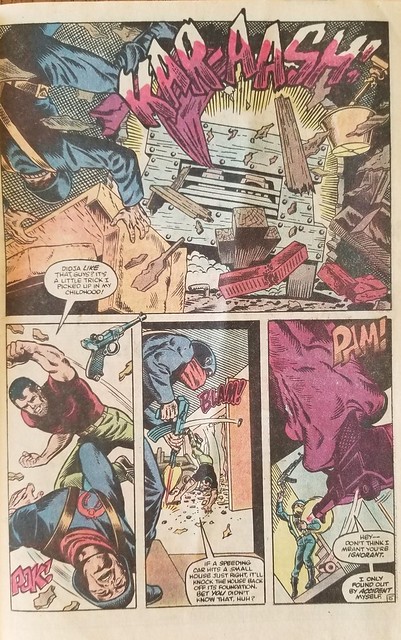 Clutch distract the security guard and then knocks him out with a left jab. 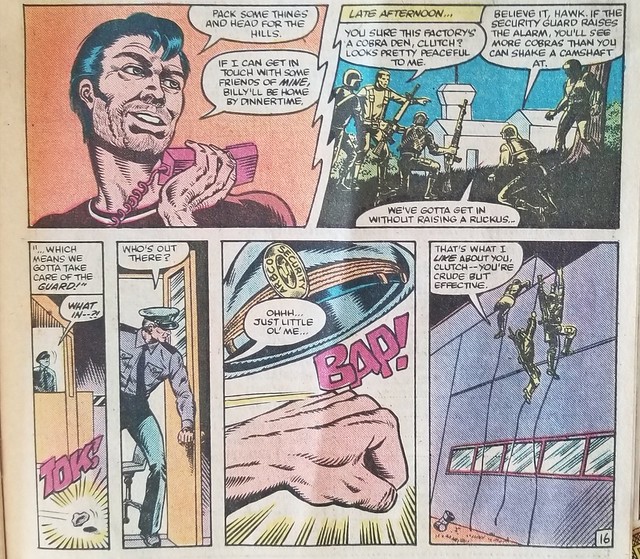 The Joes attack and one of the Cobras straps on a prototype jetpak belt and flies away. The Joes warn Airborne who is gliding along in a Falcon Hang Glider when the Cobra whizzes past him. There is a small discrepancy when we see someone who looks like Short-Fuze helping the wounded Billy, and Clutch calls him Doc. So unless this is a separate medic who only appeared in this issue, we can only assume Clutch used the word Doc in the way Bugs Bunny does.

Clutch is suddenly an expert with the belt jetpak, and he finds another one and puts it on. He takes off after the Cobra. They engage in witty dialogue as they fly after each other. 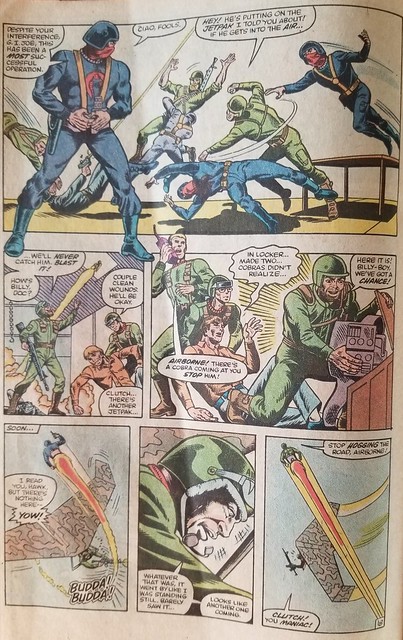 Clutch disconnects the Cobra’s jetpak belt and the Cobra and the belt both fall down onto a gas refinery. So much for subtlety and avoiding making a ruckus. 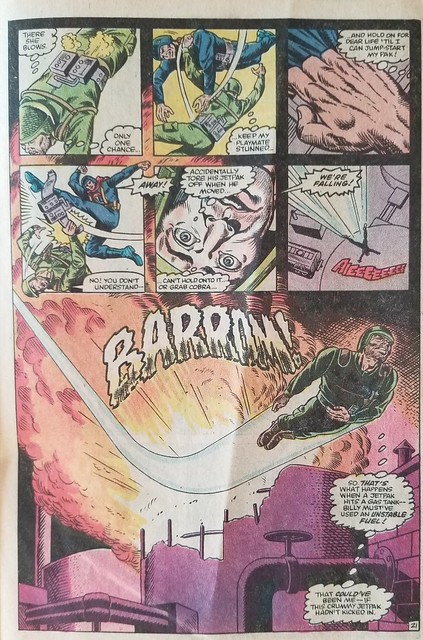 Clutch’s jetpak belt kicks in at the last moment, because, of course it does.

Clutch returns and makes some snarky answers to questions about what happened to the Cobra. Billy Kline is on a stretcher but is evidently going to be okay. And his wife Lori and daughter are fine as well.
Although he is offered to stay with them for the rest of his vacation, he jokes that he has had about enough rest and relaxation. 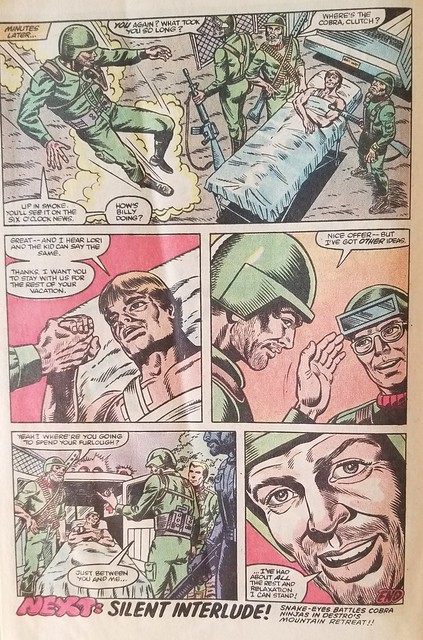 —
Okay, maybe Clutch didn’t want to mention that Billy’s house is now uninhabitable because he knocked it off its foundation and there are several Cobra trooper bodies with wide pools of blood saturating the floor of his residence. It’s not just Clutch. NOBODY is going to be living in that house.

Also, the high school teacher let Clutch take a car, modify it, and then Clutch destroyed it. That probably belonged to someone.
Clutch also blew up an entire gas storage tank facility that started a fire which will probably be burning for more than a week.
I think it is safe to say Clutch could only have caused more damage if he had actually been working for Cobra and trying to cause terror in this town!
—
This issue seems like it could have been in the Special Missions comics series as it fits the criteria of being a single or stand-alone issue that you could enjoy without having to know too much back history of the characters. It also could fit in the Origins series where background or personal information about a character is disclosed, to further develop the character or connect the reader with the character.

Now You Know – a little more about “Home is Where the War Is!” –YorktownJoe

Want to join in the discussion? MAKE THE JUMP to the forum and let us know what you think about issue #20!