At the end of the 2 part Origin of Snake-Eyes issues, Zartan, the Baroness, Destro, Cobra Commander, Firefly and Wild Weasel are all in pursuit of the Joe recon team who has given them the slip. Larry Hama intertwined the ongoing story developing in the Florida swamps along with the origin story and the exciting ninja chase. Zartan was frustrated and said it was time to call in the Dreadnoks. The tease for Issue 28 on the last page of 27 was “Enter the Tank-Smashers.” 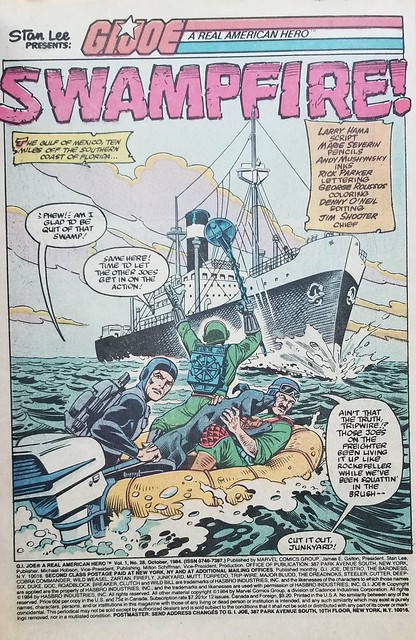 The cover shows some type of aircraft incoming and a Joe tank looking perilously in trouble. The M.O.B.A.T. was a sweet tank and a fun vehicle for kids and collectors. But it was by no mean an anti-aircraft defense system. The Wolverine would be the right tool for the job.

But as we open the first page, the title of the story is “Swampfire!”

Torpedo, Tripwire, Mutt and Junkyard are headed towards the Joe freighter about 10 miles South of the Florida coast. They are glad to get back to the freighter and let some other Joes have a crack at Cobra. 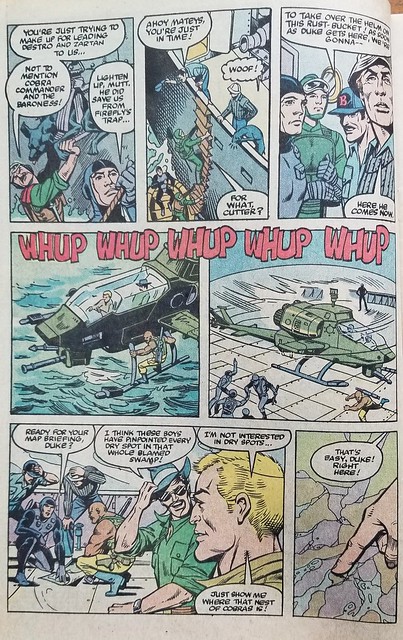 The Joes climb aboard just as Duke arrives back with Wild Bill on the Dragonfly helicopter. He wants an update and a pinpoint location of the bad guys location. 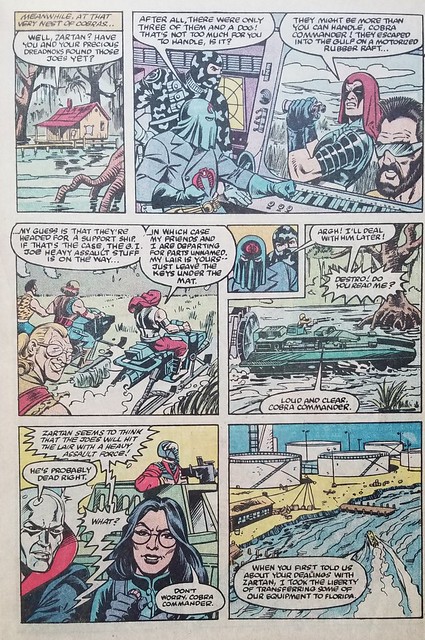 Cobra Commander and Firefly are monitoring developments back at Zartan’s cabin lair. Zartan and the Dreadnoks were tailing the Joes, but realized they headed out to the ocean where a bigger support ship would be located. They were leaving and suggested Cobra Commander and Firefly be prepared for far more Joes coming. Destro and the Baroness are headed to another location nearby with Wild Weasel as their chaperone. The Water Moccasin boat has reappeared even though it had been destroyed by the Joes in a previous issue.

We must assume Zartan had another one nearby. Baroness transferred some aircraft to Florida, just in case they ever needed something for an operation near Zartan’s cabin or the surrounding swamp region. 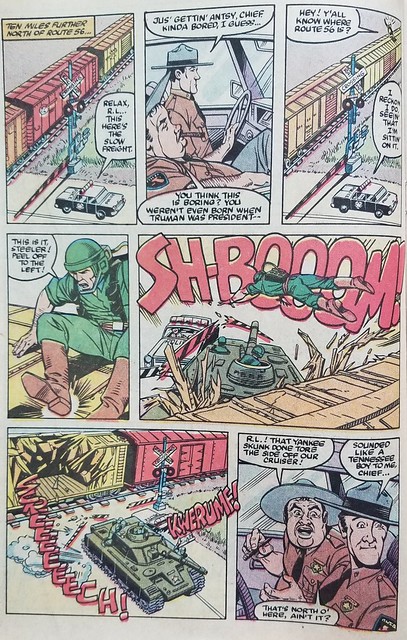 Meanwhile, a freight train is passing by and Breaker (the Joe’s communication officer) is on top of the train. He must have an awesome baritone, since he is able to yell to a local police officer over the sound of the freight train he is on. The Joes ability to converse in the middle of a firefight or near trains or heavy equipment is never short of amazing! And speaking of heavy equipment, Steeler is riding in the MOBAT, inside of a freight car. He crashes the tank through the side of the freight car, and Breaker leaps from the moving train and lands on the tank. Don’t try this at home, kids!

Unfortunately, Steeler takes it a bit tight and ruins the police car. Actually, he gave it a bit of a “trim” as the driver side is completely peeled away.

Originally when I saw the two Florida police officers, I was thinking Hama was doing a Laurel & Hardy or Abbott & Costello routine. But as I got older, I realized it was a Smokey and the Bandit bit.

Or in this case, “Smokey and the MOBAT.”

**Note: Smokey and the Bandit was a movie starring Burt Reynolds and Jackie Gleason. The police chief (Smokey) chased the Bandit around through the movie in a high speed chase. (Check Google or Wikipedia for more on that.) Referring to police or law enforcement officers as “Smokey” comes from the fact that most State troopers have particular hats that resemble the same game warden hat Smokey the Bear wears. Smokey the Bear is a mascot of the Department of Natural Resources who encourages us to be careful not to start forest fires. “Only YOU can prevent forest fires!” 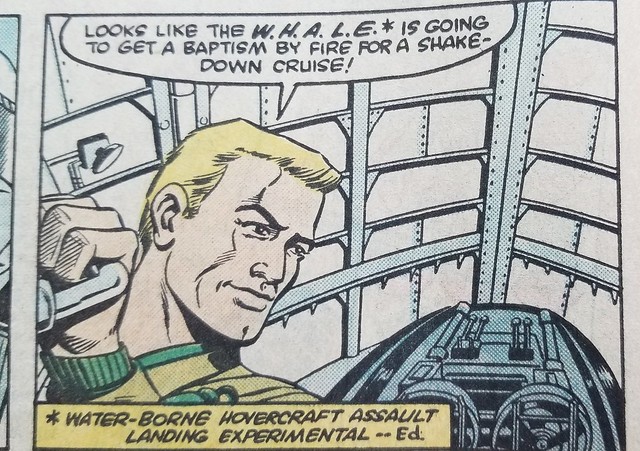 The freighter can’t pursue Cobra directly, but we are soon introduced to a new Joe vehicle: The W.H.A.L.E.

Here comes a Hovercraft!! Hovercraft typically travel just above wave types with forced air propulsion below the vehicle, and fan turbines in the rear of the vehicle to keep it moving forward.

They will soon engage with Cobra! 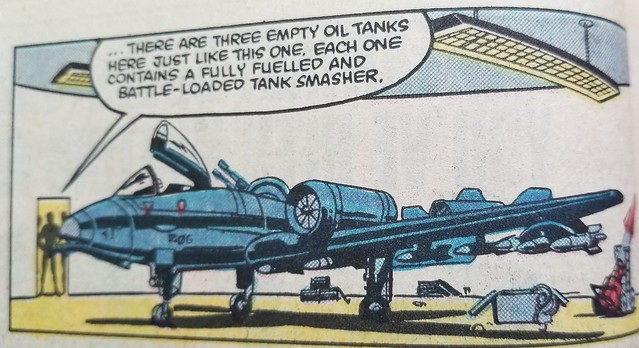 But Cobra has surprises of its own! They have hidden Tank-Smasher aircraft in empty oil refinery storage tanks. These aircraft will eventually become known as the iconic Cobra Rattler. But in this issue, they are simply referred to as Tank-Smashers.

Back in Zartan’s lair cabin, Firefly and Cobra Commander are getting impatient. The sensors show a MOBAT tank, a Dragonfly helicopter, and the new Hovercraft all inbound toward the cabin. Cobra Commander radios Destro for immediate air support. Firefly notices a false control panel and peels it back to discover, a very different control panel.

—
There are a few more pages of witty banter as the local police chief is yelling at Steeler and Breaker to pull the tank over.
But then the story switches back to Firefly and Cobra Commander.

Firefly mentions this appears to be a remote control weapons system. The Commander says Zartan was working on testing some prototype system out. Firefly confirms the system is fully operational.

And there is a brief moment of tension as the Commander gets a bit grabby and pushes Firefly out of the way. Anyone ever had a sibling or friend who grabbed the video game controls when you were trying to play? Yeah, that is always okay. That never makes anyone upset. Way to go with the poor social skills, Commander.

It appears some robotic Cobra soldiers are rising out of the swamp nearby to help defend them. 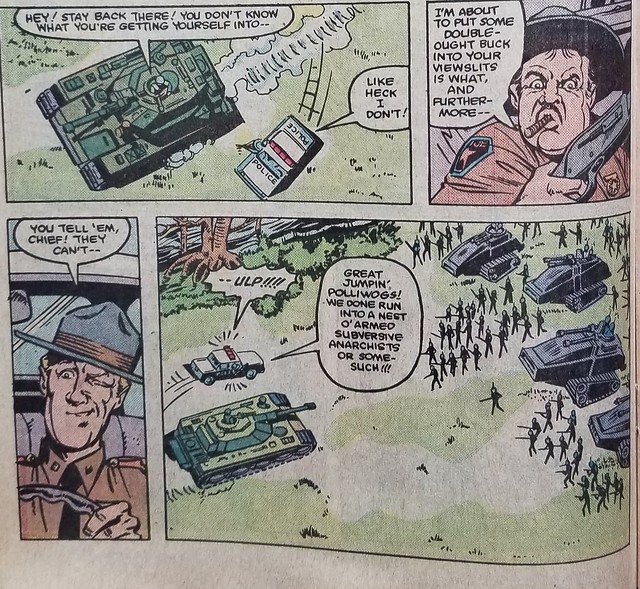 The police chief continues to spew anger at Breaker and Steeler and waves his shotgun at them. He claims he is going to shoot Steeler through the view slit. But just then they encounter a group of Cobra infantry forces and H.I.S.S. tanks. The very robot troopers and remote control H.I.S.S. tanks Cobra Commander and Firefly just activated. Note: There was a giant robot back in issue 3. Eventually, Cobra will create B.A.T.s (Battle Android Troopers). This appears to be another step in the robotic progression. 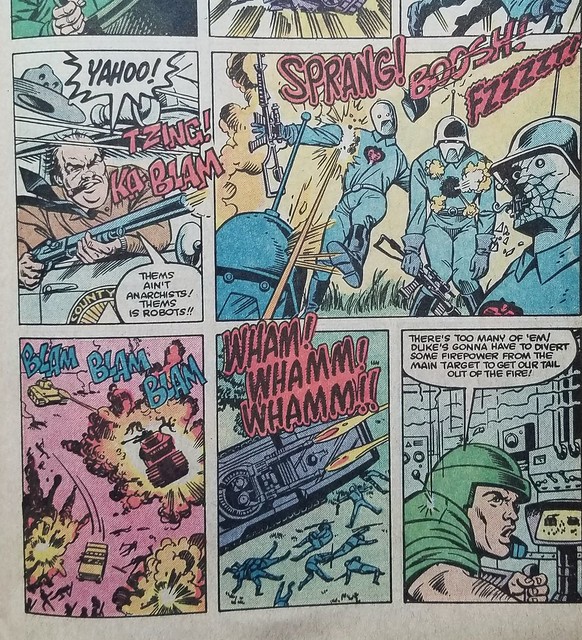 The chief turns his wrath in a more productive fashion and joins the MOBAT crew in attacking the robots. A pretty good battle ensues.
Breaker radios their location to Cutter in the W.H.A.L.E. and requests assistance.

And then Larry Hama pulls one of the more unusual segways. 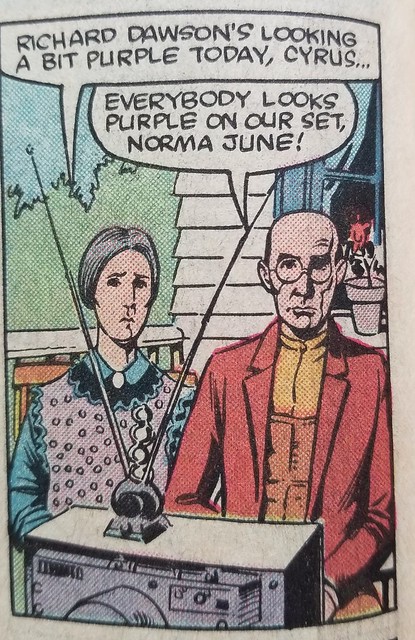 Hama tips his hat to American Gothic, a famous painting of a farmer and his wife. This farmer and his wife are watching TV on their front porch. It appears they are seeing Family Feud, which was hosted by Richard Dawson at the time. Richard Dawson also appeared as the cheerful British safe-cracker Corporal Newkirk on the WWII comedy Hogan’s Heroes. 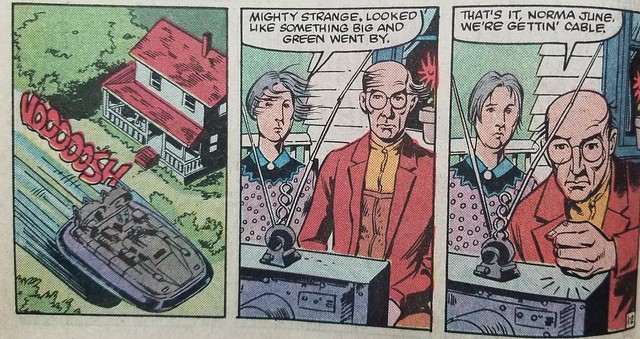 Just then, the W.H.A.L.E. cruises past and the wife mentions something big and green just went by. The husband bangs his hand on the TV and mutters that they need to get Cable TV.

Note: The metal wires coming out of the top of the TV were known as “rabbit ears” because they stuck up straight. They were analog TV antennas for capturing over the air television broadcast signals. Cable was relatively new, but becoming more popular at the time.

The police chief is not interested in stopping when the Joes warn him to stop and flee. But then they see the incoming Tank-Smashers and realize it is time to get away.

The police get out before their cruiser is destroyed by missiles. One mentions they should hide out at the “abandoned” shack nearby. Steeler realizes the missiles are heat seekers, and he the Joes pout pails of water on the engine compartment to cool the MOBAT down. That way the missiles could not lock on. I think it sounds far-fetched, but it was a plot contrivance that worked to salvage a MOBAT. And maybe that was based on real stories. 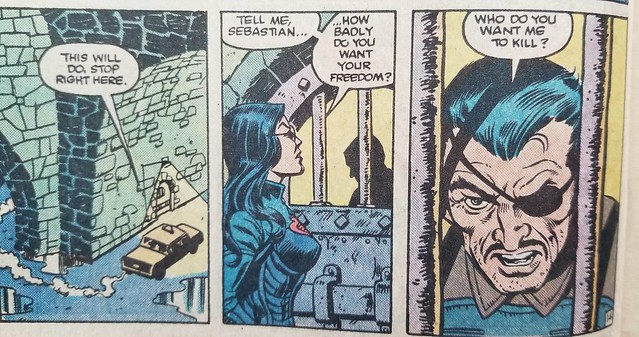 While Wild Weasel and Destro are having fun strafing and firing missiles at Joes, the Baroness has gone to another location and had a “cab” take her through a “car-wash.” It was really a Cobra courier, and the car-wash was an entry to the detention center. There she catches up with an old chum: Major Sebastian Bludd. She offers him freedom, and he asks who she wants him to kill. A few panels back would have been the time to turn the kids’ attentions to something else. 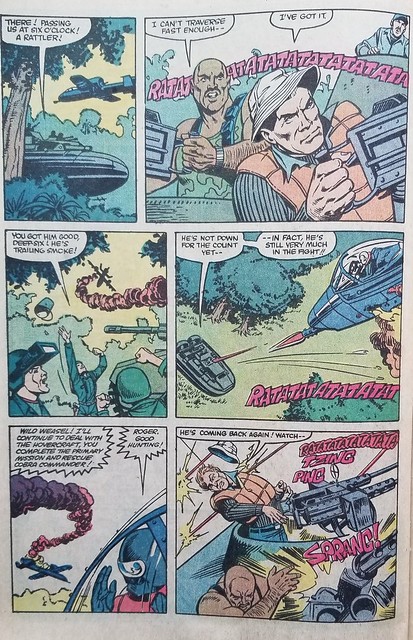 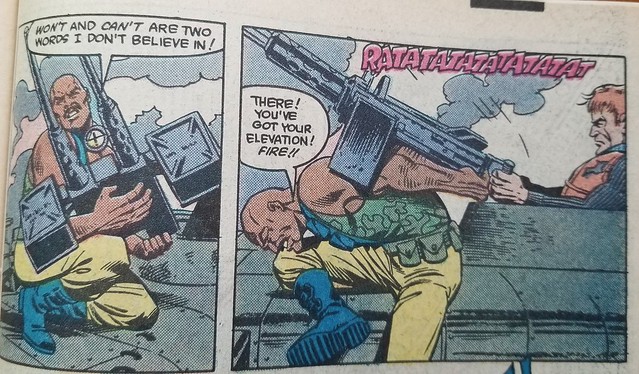 The forward machine gun mounts were manned by Roadblock and Deep Six. Both guns are hit and Deep Six takes shrapnel or a round through his shoulder. Roadblock’s gun is knocked out and the mount on Deep Six’s gun is ruined. Roadblock lifts the gun and puts his body underneath to elevate it. Deep Six fires as Destro comes around for another pass. 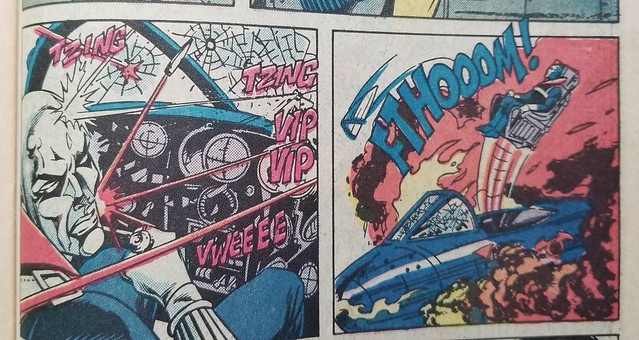 Destro’s canopy is peppered and at least one round penetrates and hits his mask. It is fair to say if he didn’t have his mask, he would definitely have been perforated. 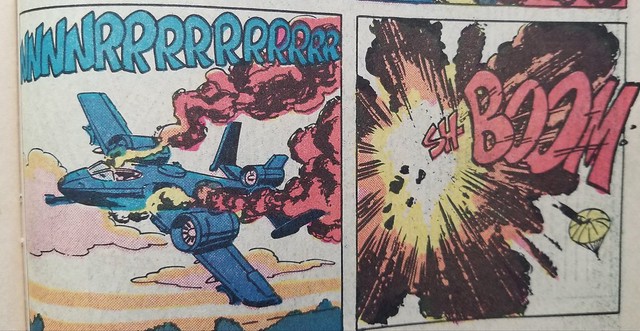 Is there a chute? Of course there is!! 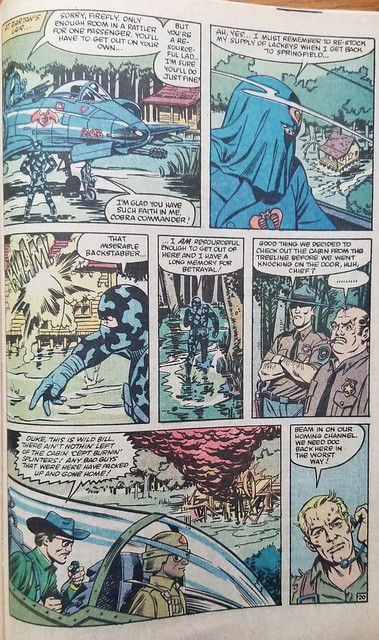 Wild Weasel lands the remaining Rattler near Zartan’s cabin. The Commander mentions there isn’t enough room for Firefly to come along, and he bids him good luck.

As the Rattler takes off leaving him behind, he takes one of his many explosives and throws it at the cabin. Firefly is clearly angry. And he talks of revenge for the betrayal of being left behind.

On the outskirts, the 2 police officers watch the cabin ablaze and the thin one mentions he is glad they decided to take a moment and see if it was really empty before going inside.

Wild Bill and Doc circle the burning cabin, then Duke radios and tells them to get there in ahurry. 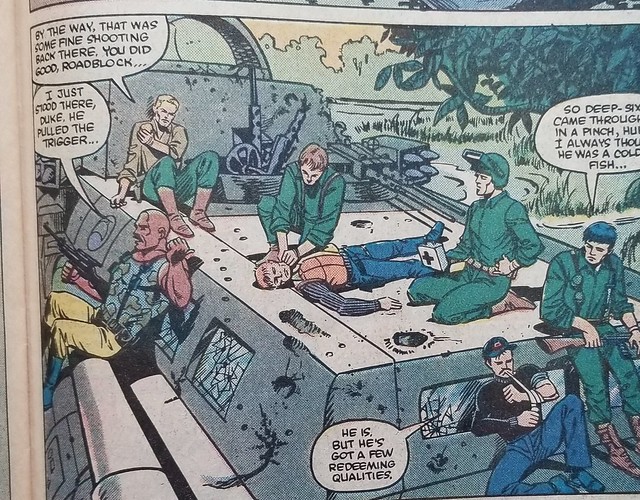 Deep Six is badly wounded. The rest of the Joes on the W.H.A.L.E. are partly injured, but not to the extent of Deep Six. The Hovercraft is pretty shot up as well. 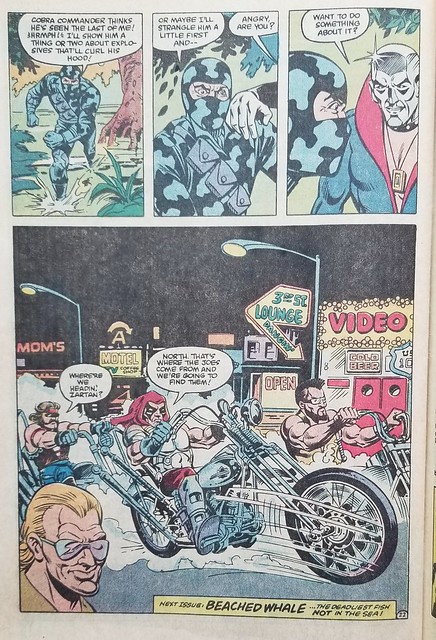 Destro catches up to Firefly, and they both plot their revenge on being left behind. Zartan and the Dreadnoks are riding motorcycles.
They are headed North to engage the Joes.

And the story is continued for the next issue.

Issue 28 continued the story in the swamps and had an ironic title. Later on, the Dreadnoks actually received a vehicle that was part swamp boat, part helicopter that was named the Swampfire. But this issue was not about that. We did see much more of the Cobra Tank Smashers (aka the Rattlers). And the W.H.A.L.E. hovercraft was shown off as well. There were some light-hearted moments with an American Gothic homage, and a tip of the State trooper hat to Smokey and the Bandit. There were heavier moments as well, as Deep Six and some of the other Joes look in pretty bad shape after getting strafed.

Overall this was an action-packed issue.

I hope you enjoyed this issue and will tune in soon for Issue 28.

Now You Know – a little more about ”Swampfire!” Feel free to let me know what you thought of this issue AFTER THE JUMP!

Bonus retro advertisement on the Postbox the Pit letters page