In Issue 36, we had three stories with a theme of ships. We also learned an important theme. Crimson Guards are undercover everywhere, and they will keep popping up as the story continues. Feel free to check out the review of Issue 36 in case you missed it. (You can catch up on other “Now You Know With YorktownJoe” reviews there as well.) 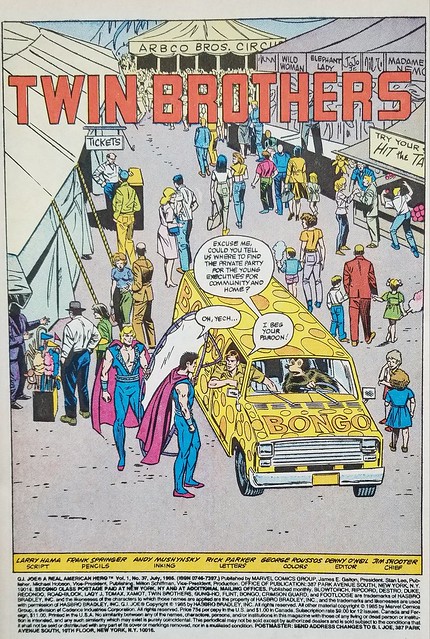 The issue begins with a visit to the circus or an amusement park. Bongo the Balloon Bear is delivering balloons, and the side door opens and some of them escape.

Ripcord is quick thinking and leaps on the acrobat’s trampoline and recovers them. Because of course he does. 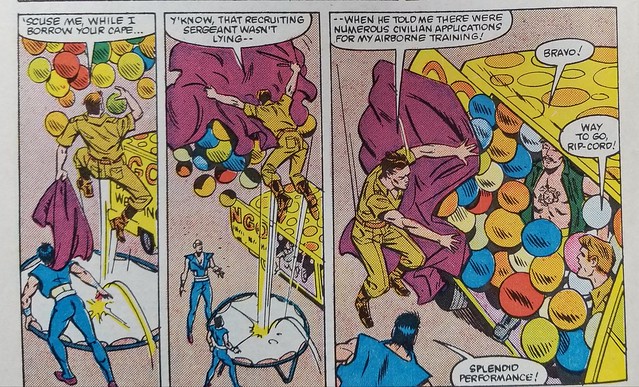 Bongo takes off her Balloon Bear cosplay mask and reveals her name is Candy. Ripcord is jealous. He begins to seem increasingly clingy. This might also be seen as a sign a relationship may not last. 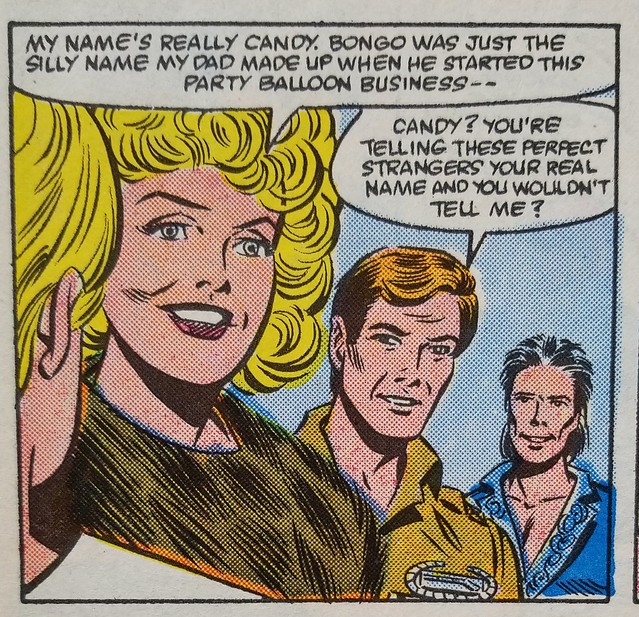 Meanwhile, a shadowy figure in a nearby tent communicates with an unseen character. The dialogue bubbles seem to indicate a different type of communication. 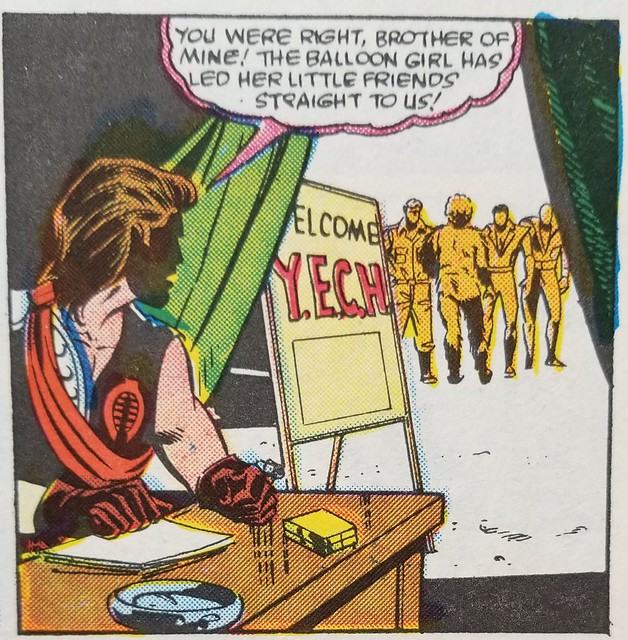 Elsewhere, Roadblock and Lady Jaye are using captured Cobra HISS tanks on a practice range against a new Joe vehicle. 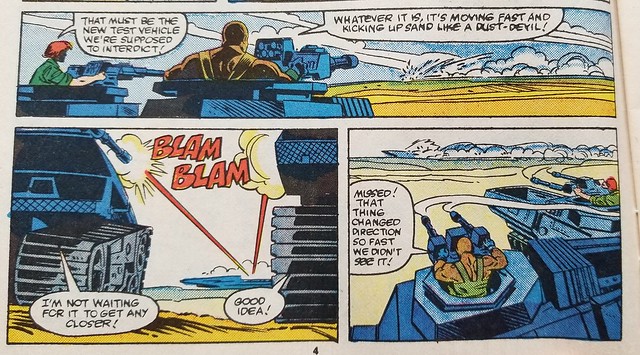 We get to meet a new Joe, code name: Flint. He comes in grinning with the new Armadillo mini-tank. It blends a unique combination of speed, armor, and firepower,

Duke mentions Flint is not on the team because of his strengths as much as his shortage of weaknesses. Duke doesn’t want to be surprised by someone who panics in a firefight. 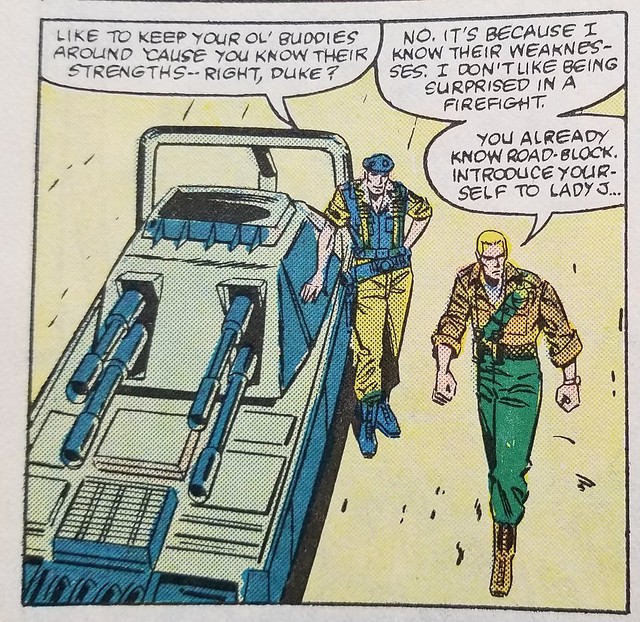 Bongo, err, Candy and Ripcord head to the hall of mirrors, while Blowtorch and Gung Ho go for the roller coaster. Blowtorch is nervous about the coaster.

They will each face peril from Cobra.

Tomax calls Destro and informs him the Joes are there, and Destro tells him they are on their own.

Xamot goes for the roller coaster, and Tomax deploys a busload of Crimson Guardsmen to the Hall of Mirrors.

A busload of guys in full business suits and briefcases at the circus. Yeah. That’s not suspicious at all.

Maybe the convention referenced on the first page brought other entrepreneurs there all dressed up.

Back at HQ, we meet another new Joe, code name: Footloose. Wild Bill gives him a hard time to welcome him to the team with some grim death humor. Wild Bill, what a funny guy!

The Crimson Guardsmen change into their battle uniforms in the hall of mirrors, and Ripcord utters Admiral Ackbar’s favorite quote.

I have wondered if the art department had actual Crimson Guard action figures in hand when they drew these panels. They appear to be HISS Drivers wielding Firefly’s sub machine gun. Perhaps they were given the concept of Elite Crimson Guard, and just drew guys in red combat uniforms the best they could without actual toys to guide the development process.

At any rate…it is amazing that they didn’t shoot each other in hall of mirrors, being in a circle and all… 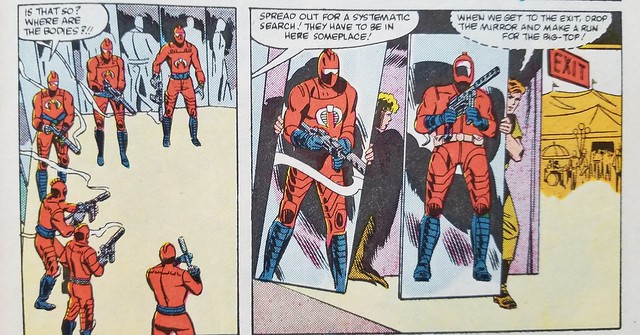 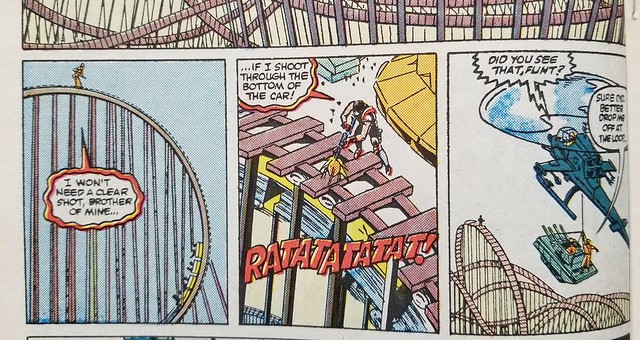 At the coaster loop, Xamot shoots the bottom of the coaster car with Blowtorch and Gung Ho riding inside. Wild Bill drops Flint off to deall with Xamot. 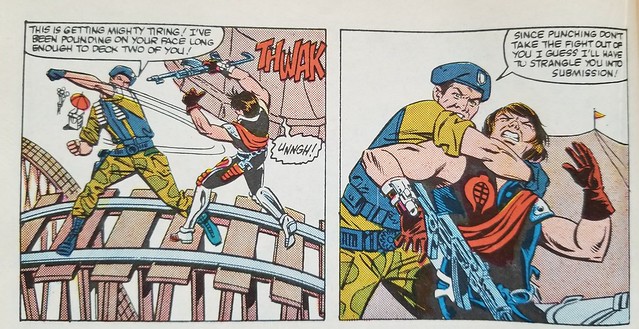 Tomax catches Ripcord and Candy and signals to CG’s, but then appears to be choking. Ripcord is unsure if they should try and escape or give the new Cobra the Heimlich.

Additional Crimson Guards are providing excellent customer service interactions to the circus customers while checking on Gung Ho and Blowtorch, who appear to be dead. 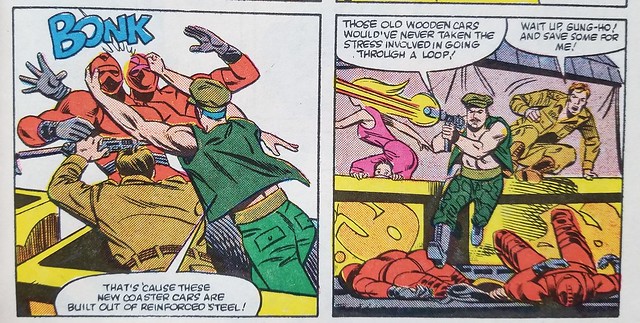 Nope! They are fine and joining the fight. 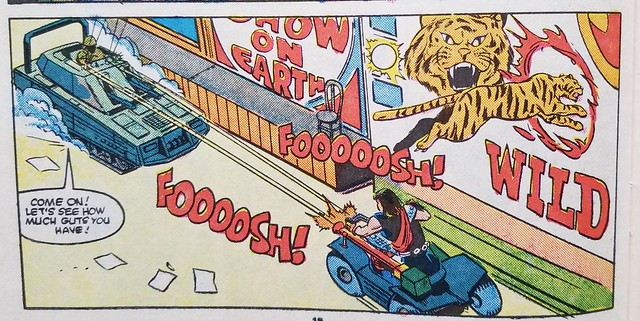 Tomax is trying to get to his brother, but first he showcases the Cobra Ferret ATV and plays chicken with Footloose in the Armadillo mini-tank.

Tomax makes it to the coaster, rides up the loop, and signals Xamot to fall away in an acrobatic feat. He catches him while steering with his knees.

Although this is amazing, there is still more action to be had! 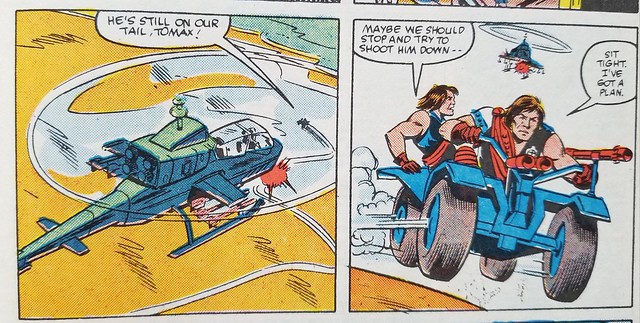 Wild Bill is on their tail as they try to escape. But Tomax has a plan.

Not sure why Wild Bill didn’t hover, pivot, then strafe them with his machine gun. But that would be a waste of perfectly good new bad guys.

Bongo/Candy shows her gratitude for Ripcord saving her life by dumping him. And boy does she make it clear she never wants to see him again. 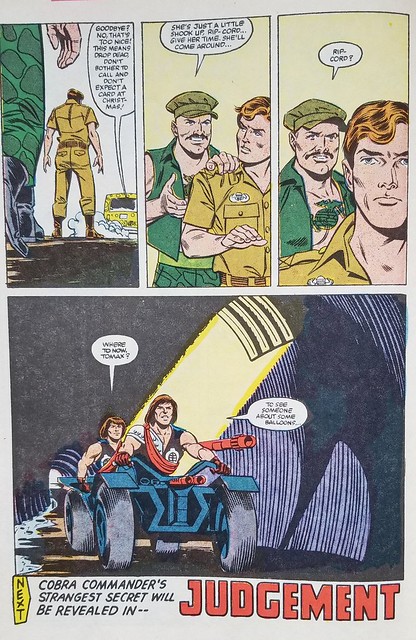 The Twin Brothers proceed into the culvert, evidently out of the reach of the Dragonfly’s firepower. But the Joes might have wanted to post a guard or something unless that culvert leads to a secret underground base, eventually those guys would need to exit the same way they entered… But conveniently that brings us to the end of the issue.

There is also a tease for the next issue that one of Cobra Commander’s secrets would be revealed.

This issue introduced new Joes and Cobras, including the iconic Crimson Twins Tomax and Xamot. Flint and Footloose joined the Joes, along with the Armadillo mini-tank. Cobra has a new small vehicle of their own, the Ferret ATV. I only wonder how many more they would have sold if Tomax and Xamot were depicted each riding on their own? But for the story, Tomax racing through the circus daringly to rescue his brother, one Ferret was sufficient. I appreciate that Blowtorch and Ripcord wore their civilian clothing to the circus. They don’t need full uniforms whenever they are depicted. This was a good story, although I’m not sure why Wild Bill didn’t move to the mouth of the giant culvert, hover for a moment, then fill the opening with all his remaining rounds?

Oh wait. That would have ruined some perfectly interesting new characters.

Now You Know – a little more about: ”TWIN BROTHERS!” Feel free to let me know what you thought of this issue AFTER THE JUMP.